A Blind Priest Who Discovered Joy Thanks to Saint Josemaria

At the age of 16, Father James lost his sight completely. But not his inner light. Now 36 years old, accompanied by his faithful dog "Ibiza," he says that the spirituality of Opus Dei played an important part in the discovery of his vocation to the priesthood.

Tiago Varanda was born with congenital glaucoma, a serious disease that results from increased intraocular pressure. As time went by he gradually lost his sight. At the age of seven he lost sight in one eye and at sixteen he lost it in the other. "This moment came sooner than I expected and I lost my sight completely."

Now a priest in Lamego (Portugal), he says: "Although I couldn't see much, I still liked to see the light of day. I liked to see the landscapes, the green outlines of the mountains, the blue of the sea, the sunrise and sunset. It was a moment of great discouragement. But soon, thanks to my faith and trust in God, and also with the help of my family and friends, I overcame it.”

But this didn't stop him from dreaming of a useful life. He dated a girl, and began working as a history teacher; in other words, he lived a fairly normal life. "I began to reflect on what I wanted to do in life and I realized right away that God was not asking me to be the father of a family, but to be a priest. A priest is also a father. But there was a challenge: to enter the seminary. I didn't have the courage."

Father James says: "I loved what I was doing and I wanted to be quite certain about my vocation: every time I looked for this certainty I became more distressed because I couldn't find it." 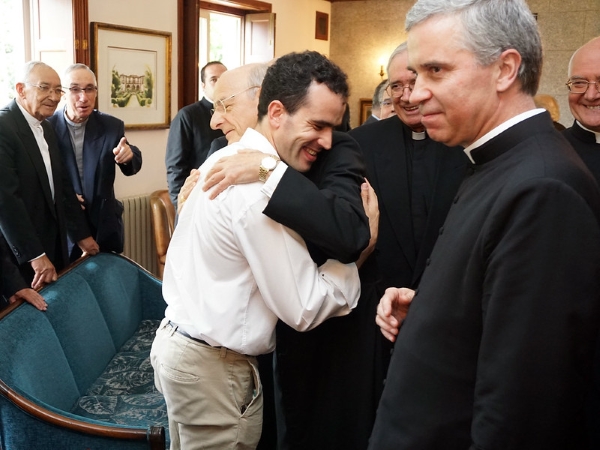 When he was studying at university in Viseu, he met Opus Dei through a friend and began to participate in its formational activities. "I started spiritual direction with a priest of Opus Dei. The spirituality of the Work helped me to respond to the call God had given me."

He says that from Saint Josemaría he learned how to find a deep joy: "to know that our Lord is with us in the midst of difficulties; the joy of knowing that the Cross is not the last word. The last word is the Resurrection."

THE WORK HELPED ME REALIZE THAT I COULD FIND JOY IN THE MIDST OF DIFFICULTIES. THAT THE CROSS IS NOT THE LAST WORD. THE LAST WORD IS THE RESURRECTION

In his search for "certainties" he discovered something more important: trust. He began to realize that if God was calling him to the priesthood, he could trust Him and that His grace would never fail. "It was at this point that I found courage to enter the seminary. But I knew that it was a risk, because I was leaving my job, which I liked a lot." He felt within himself "a very strong desire to be a priest, to be able to help people find Christ”.

Currently, he collaborates in the Parish of Santa Maria Maior and Sé de Braga (Portugal). He is chaplain at a home for the elderly where he celebrates Mass daily. He is Spiritual Assistant in the Archdiocesan Department for Adult Formation, and in the Archdiocesan Department for the Pastoral Care of the Handicapped, as well as Spiritual Assistant to the Scouts of Braga. He was appointed by the Archbishop of Braga as collaborator in the pastoral work of confessions and hospitality in the city.

He admits that he entered the seminary not because he was sure he was going to be a priest, but because he had the confidence that our Lord would accompany and help him. "I know that there will continue to be challenges and difficulties, but with God's grace I will overcome them, because I know that He is present in my life." And he concludes: "the fact that I can't see helps me a lot to listen closely and attend to people. It makes me much more sensitive to their needs.”

"THE FACT OF NOT SEEING CAN HELP ME A LOT TO LISTEN AND ATTEND TO PEOPLE. IT MAKES ME MUCH MORE SENSITIVE TO THEIR NEEDS."

In the video above, he shows St. Josemaria's book, The Way, in a Braille version, which helps him in his prayer life. "I love to read and reread this first point of The Way: "Don’t let your life be barren. Make yourself felt. Shine forth with the torch of your faith and your love. With your apostolic life, wipe out the trail of filth and slime left by the unclean sowers of hatred. And set aflame all the ways of the earth with the fire of Christ that you bear in your heart."