"Everything in our life is transformed into love"

On Wednesday October 25, in his final catechesis on the topic of Christian hope, Pope Francis spoke about Paradise as the goal of our journey in this life. 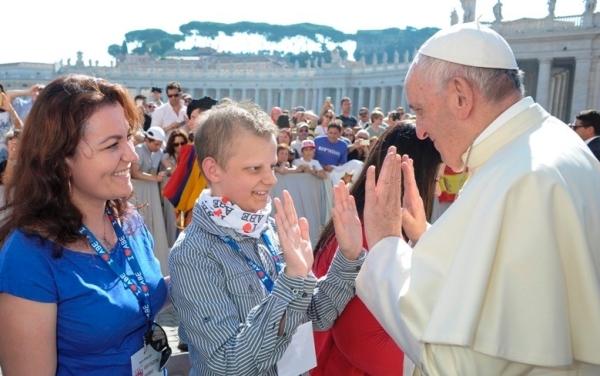 This is the final catechesis on the theme of Christian hope, which has accompanied us since the beginning of this liturgical year. And I will conclude by speaking about Paradise, as the goal of our hope.

“Paradise” is one of the final words pronounced by Jesus on the cross, addressed to the good thief. Let us pause a moment on this scene. Jesus is not alone on the cross. Next to Him, on the right and on the left, there are two wrongdoers. Perhaps, passing in front of those three crosses raised up on Golgotha, one might have breathed a sigh of relief, thinking that finally justice was being done, by putting such people to death.

Next to Jesus there is also a confessed criminal: one who acknowledges that he has deserved that terrible punishment. We call him the “good thief” who, opposing himself to the other one, says: we receive what we have deserved for our actions (cf. Lk 23: 41).

On Calvary, on that tragic and holy Friday, Jesus reaches the extreme of His incarnation, of His solidarity with us sinners. There He realises what the prophet Isaiah had said to the suffering Servant: he “was numbered with the transgressors” (53: 12; cf. Lk 22: 37).

It is there, on Calvary, that Jesus has His final meeting with a sinner, to throw open also to him the doors of His Kingdom. It is the only time that the word “Paradise” appears in the Gospels. Jesus promises it to this “poor devil” who on the wood of the cross had the courage to address to Him the most humble of requests: “Remember me when you come into Your Kingdom” (Lk 23: 42). He had no good deeds to show, he had nothing, but he trusted in Jesus, Whom he recognised as innocent, good, so different from him (v. 41). That word of humble repentance was enough to touch Jesus’ heart.

The good thief reminds us of our true condition before God: that we are His children, that He feels compassion for us, that He is disarmed every time we express to him our nostalgia for His love. In the rooms of many hospitals or in prison cells this miracle is repeated countless times: there is no person, no matter how badly he has lived, to whom there remains only desperation, and to whom grace is prohibited. Before God we all appear empty-handed, a little like the publican in the parable who stopped to pray in the temple aside from the others (cf. Lk 18: 13). And every time a man, carrying out the final examination of conscience of his life, discovers that his shortcomings far outweigh his good deeds, he must not be discouraged, but trust in God’s mercy.

God is the Father, and until the end He awaits our return. And when the prodigal son returns and begins to confess his faults, his father silences him with an embrace (cf. Lk 15: 20).

Paradise is not a fantasy place, nor is it an enchanted garden. Paradise is the embrace of God, infinite Love, and we enter thanks to Jesus, Who died on the cross for us. Where there is Jesus, there is mercy and happiness; without Him there is cold and darkness. In the hour of death, the Christian repeats to Jesus, “Remember me.” And even if there were no-one to remind Him of us, Jesus is there, next to us. He wants to take us to the most beautiful place that exists. He wants to take us there with the good there has been in our life, great or small, because nothing is lost of what He had already redeemed. And in the house of the Father He will also take all that which in us still needs to be redeemed: the shortcomings and errors of an entire life. And this is the goal of our existence: that everything is fulfilled, and is transformed into love.

If we believe this, we stop fearing death, and we can also hope to depart from this world in a serene and trustful way. He who has known Jesus no longer fears anything. And we too will be able to repeat the words of the elderly Simeon, also blessed by the encounter with Jesus, after an entire life consumed in expectation: “Lord, now you are letting Your servant depart in peace, according to Your word; for my eyes have seen Your salvation” (Lk 2: 29-30).