"Why – I ask you – is Mary the Mother of Christ, other than because she gave birth to the members of Christ?" Saint Augustine praises our Lady's excellence in this excerpt from a homily. 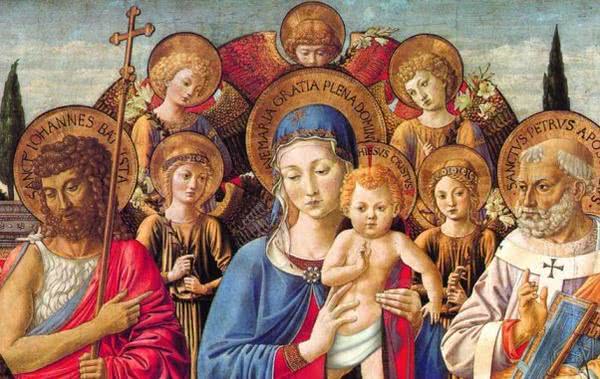 While he was still speaking to the crowds, his mother and his brothers were standing outside, wanting to speak to him. Someone told him, ‘Look, your mother and your brothers are standing outside, wanting to speak to you.’ But to the one who had told him this, Jesus replied, ‘Who is my mother, and who are my brothers?’ And pointing to his disciples he said, ‘Here are my mother and my brothers! For whoever does the will of my Father in heaven is my brother and sister and mother.’ (Mt 12:46-50).

Why did Christ piously scorn his mother? It did not concern just any mother, but a virgin Mother. Mary, in effect, had received the gift of fertility without detriment to her integrity: she was a virgin at conception, a virgin at birth and forever. Nevertheless, the Lord relegated such an excellent Mother so that maternal affection would not be a barrier to fulfilling a job which had begun.

What was Christ doing? He brought the good news to the people, he destroyed the old man and built up the new; he freed souls, unchained prisoners, illuminated darkened intellects, and carried out every kind of good work. His whole being was consumed in this holy enterprise. And just at that moment someone announced the affections of the flesh. You have already heard Jesus’ reply; why am I going to repeat it? May mothers pay attention, so that their affection does not make the good work of their sons difficult. And if they try to impede them or to place obstacles so as to delay what they cannot prevent, they will be despised by their sons. Worse, I am inclined to say that they will be scorned, scorned out of piety. If the Virgin Mary was treated like that, why does a woman – be she married or widowed – have to get annoyed when her son, keen to do good, neglects her? You will say to me: ‘Are you comparing my son with Christ?’ I will reply: ‘No. No, I am not comparing him with Christ, nor you with Mary. Christ did not condemn maternal affection, but showed with his towering example that one has to leave behind one’s own mother to carry out the work of God...

Is it possible that Mary – chosen so that from her salvation would be born for us, and created by Christ before Christ was created in her – did not fulfil the will of the Father? There is no doubt that she did, and did so, perfectly. Mary, who through faith believed and conceived, strove first to be a disciple of Christ rather than the Mother of Christ. She received more happiness as a disciple than as a Mother.

Mary was already blessed before giving birth, because she carried the Teacher in her womb. Check to see if what I am saying is true. On seeing the Lord walking among the multitude and working miracles, a woman exclaimed, Blessed is the womb that bore you and the breasts that nursed you (Lk 11:27). What does the Lord reply so that we would not seek happiness in the flesh? Blessed rather who hear the word of God and keep it (Lk 11:28). But Mary is blessed because she heard the word of God and kept it: she retained the truth in her mind better than the flesh in her womb. Christ is Truth, Christ is Flesh. Christ Truth was in the soul of Mary; Christ Flesh was enclosed in her womb; but what is found in the soul is better than what is conceived in the womb.

Mary is most holy and most blessed. The Church, nevertheless, is more perfect than the Virgin Mary. Why? Because Mary is a part of the Church, a holy member, excellent, super-eminent, but a member of the entire body. The Lord is the Head, and Christ is Head and Body. What will I then say? Our Head is divine: we have God for our Head.

You, dearly beloved, are also members of Christ, you are the body of Christ. See how you are what He said you would be: Here are my mother and my brothers (Mt 11:49). How will you be the mother of Christ? Our Lord himself replies: Whoever does the will of my Father in heaven is my brother and sister and mother (Mt 12:50). Look! Understand the words about the brother and the sister, for this legacy is unique; and discover in these words the mercy of Christ: being the only-Begotten, he wanted us to be the heirs of the Father, co-heirs with him. His inheritance is such, that it cannot decrease even if it is shared by a multitude. Understand well then, that we are brothers of Christ, and that the holy and faithful women are his sisters. But how are we to understand that we are also mothers of Christ? Am I inclined to say that we are? Yes, I am inclined to say so. If earlier I stated that you are bothers of Christ, how can I now not state that you are his mother? Can I now deny Christ’s words?

We know that the Church is the Spouse of Christ, and also, although this is more difficult to understand, that she is his Mother. The Virgin Mary foreshadowed her as a type of the Church. Why – I ask you – is Mary the Mother of Christ, other than because she gave birth to the members of Christ? And you, members of Christ, who has given birth to you? I hear the voice in your hearts saying ‘Mother Church!’ Just like Mary, this holy and honourable Mother while she gives birth, is also a virgin.

You are the proof of the first statement: you have been born of Her, like Christ, of whom you are members. Divine testimonies of her virginity are not lacking. Come to the front of the people, blessed Paul, and be my witness. He raises his voice to say what I would like to state: I promised you in marriage to one husband, to present you as a chaste virgin in Christ. But I am afraid that as the serpent deceived Eve by its cunning, your thoughts will be led astray from a sincere and pure devotion to Christ (2 Cor 11:2-3). Preserve virginity in your souls, which is the integrity of the Catholic faith. Where Eve was corrupted by the word of a serpent, there the Church ought to be a virgin with the grace of the Omnipotent.