April 29 is the feast day of Saint Catherine of Siena. The story of how Saint Josemaria decided to name her an intercessor of Opus Dei. Adapted from an article published in "Studia et Documenta," vol. 8 (2014).

Already as a young priest, Saint Josemaría had a deep devotion to Saint Catherine of Siena. He called the “Intimate Notes” that he began to write down in 1928 about his own spiritual life “Catherines,” because he wanted to record with complete sincerity the truth about himself. “These are candid notes—Catherines, I called them, in honor of the saint of Siena—which for a long time I wrote kneeling down, and which served me as reminders and wake-up calls. I think that, as a rule, when I was writing with that childlike simplicity, I was praying” (Andres Vazquez de Parada, The Founder of Opus Dei, Vol. 1, p. 255).

In a letter addressed to members of Opus Dei in 1932, he said: “The saints are always uncomfortable people, men and women (my Saint Catherine of Siena!) who because of their example and words are a continual source of unease for the consciences of those immersed in sin.”

Saint Josemaría admired the strength and clarity with which Catherine of Siena defended the truth: “I am sure,” he wrote in another letter, “that there will be some who will not easily forgive me for speaking so clearly, but I must be true to my conscience and to God, out of love for the Church, out of loyalty to the Holy Church and because of my affection for you. I have a special devotion to Saint Catherine—that great ‘grumbler’! —because she refused to stay silent and spoke great truths out of love for Christ, for God’s Church and for the Roman Pontiff” (Letter, 29 September 1957, no. 49).

In a letter dated August 15, 1964, amid the confusion being stirred up by those who were using the Second Vatican Council as a cover to spread their own mistaken beliefs, he returned to the need to defend the truth fearlessly: “Controversies, errors, excesses and foolish attitudes have been present in every epoch. And the voice that has overcome these obstacles has always been the voice of truth anointed by charity. The voice of the truly wise, the voice of the Magisterium; the voice, my children, of the saints, who have found the right language and tone of voice needed to clarify, to exhort, to call for an authentic renewal ... My children, you know very well the history of the Church and you know that our Lord makes use of simple and strong souls to carry out his will in moments of confusion or torpor in Christian life. I love the fortitude of Saint Catherine, who tells the truth to the highest personages with an ardent love and diaphanous clarity; I am filled with fervor by Saint Bernard’s teachings … So many prophetic voices, united to the enlightened Magisterium of the Church, flood the whole People of God with light.”

Saint Josemaría was moved by Saint Catherine’s unconditional love for the Church, which spurred her to speak out so frankly. We see this in his homily “Loyalty to the Church,” given on June 4, 1972: “The Catholic Church is roman. I savour that word, roman! I feel completely roman, since roman means universal, catholic. For it leads me to love tenderly the Pope, il dolce Cristo in terra, as Saint Catherine of Siena, whom I count as a most beloved friend, liked to say.”

Although she often used strong language in her Dialogue and letters to criticize the bad behavior of priests who fail to live up to their high vocation, Saint Catherine never lost her great esteem for the priesthood. In the homily A Priest Forever, given on April 13, 1973, the founder of Opus Dei pointed to Saint Catherine’s example: “The priesthood leads one to serve God in a state which, in itself, is no better or worse than any other: it is simply different. But the priestly vocation is invested with a dignity and greatness which has no equal on earth. Saint Catherine of Siena put these words on Jesus’ lips: ‘I do not wish the respect which priests should be given to be in any way diminished; for the reverence and respect which is shown them is not referred to them but to Me, by virtue of the Blood which I have given to them to administer. Were it not for this, you should render them the same reverence as lay people, and no more... You must not offend them; by offending them you offend Me and not them. Therefore I forbid it and I have laid it down that you shall not touch my Christs.’

“Some people keep searching for what they call the identity of the priest. How clearly Saint Catherine expresses it! What is the identity of the priest? That of Christ. All of us Christians can and should be not just other Christs, alter Christus, but Christ himself: ipse Christus! But in the priest this happens in a direct way, by virtue of the sacrament” (In Love with the Church, no. 38).

Saint Catherine, intercessor for the apostolate of public opinion

While the other intercessors of the Work, such as Saint Pius X, Saint Nicholas of Bari, Saint John Mary Vianney and Saint Thomas More, had already been chosen in previous years, it seems that the idea of invoking Saint Catherine’s intercession for the apostolate of public opinion came to the founder in 1964, as can be seen from a letter addressed to Don Florencio Sanchez Bella, then counselor of Opus Dei in Spain, on 10 May of that year: “I want to let you know that my devotion to Saint Catherine of Siena, which I have had for a long time, has recently grown even stronger: because she knew how to love the Pope with a filial love, because she knew how to serve the Holy Church of God with so much sacrifice and... because she knew how to speak out heroically. I am thinking of declaring her our patroness (intercessor) in heaven for our apostolates of public opinion. We shall see!”

A few days before this letter was written, on April 30, during a family conversation with some members of Opus Dei, the founder said: “I want the feast of this Saint to be celebrated in each one’s spiritual life and also in the life of our centers. I have always been devoted to Saint Catherine: because of her love for the Church and the Pope, and the courage she showed in speaking out clearly whenever necessary, moved precisely by the same love. In past years the heroic thing was to keep quiet, and that’s what your brothers did. But now what is heroic is to speak out, so as not to offend God our Lord. To speak out, but trying not to wound anyone, doing so with charity, but also with clarity” (in Cronica, May 1964).

On May 13, 1964, Saint Josemaría decided to put into practice the desire he had expressed to Don Florencio Sanchez Bella. During a family get-together that day, returning to the same topic, he said smilingly: “Why wait any longer? It falls to me, as founder, to appoint her, and since we do things in the Work in a simple way, without formality, I appoint her Intercessor at this very moment.” Then he asked someone to bring him a pen and paper and dictated a communication to be sent to all the regions: “On 13 May, considering how with such great clarity and uprightness of heart Saint Catherine of Siena made known, with courage and without excluding anyone, the paths of truth to the people of her time, I decreed that the apostolate that the members of Opus Dei carry out throughout the world with truth and charity in order to inform public opinion correctly, be entrusted to the special intercession of this Saint” (written testimony by José Luis Illanes).

Relics of the saint

Saint Josemaría had a reliquary of the saint together with the relics of the other intercessors placed in the oratory of the Holy Trinity in Villa Tevere in Rome. This reliquary contains two relics of the saint. The first one (ex ossibus S. Catharinae Senensis V.O.P.) has the authentication of the postulator general of the Dominican order, Fra’ Tarcisio M. Piccari OP, dated June 25, 1964. The other relic (ex velo quo coopertum fuit sacrum caput Sanctae Catherinae Virginis Senensis), taken from the monastic veil of the saint, was given to the founder by the Archbishop of Siena, Monsignor Mario Ismaele Castellano OP, who signed the authentication. The silver reliquary bears the following inscription: Dilexit opere et veritate Ecclesiam Dei ac Romanum Pontificem. 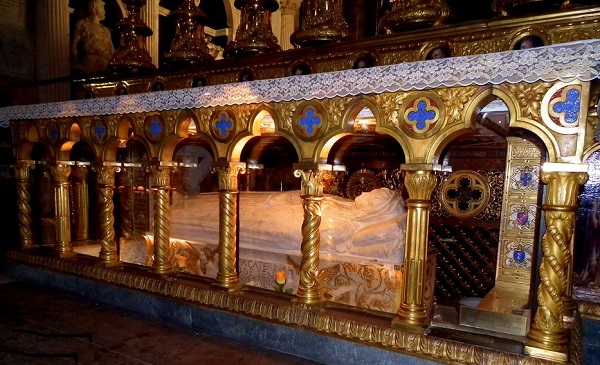 Over time, it came to light that only the second relic (taken from the saint’s veil, which the Archbishop of Siena had in his possession) could be accepted as authentic, while the relic from the bones (ex ossibus) was in all likelihood not authentic.

Saint Josemaria, during a family conversation in 1972 with the students of the Roman College of the Holy Cross, was asked a question about Saint Catherine. He replied: “I have an extraordinary devotion to her. You know that she is one of our intercessors, and I have a relic of hers on the altar where I celebrate Mass. I once wrote to the present Pope [Paul VI], telling him: I keep this relic out of devotion, because she had as much love for the Church and the Pope as I do. I didn’t want to say that she had more, because it’s not true. We all have the same love that Catherine did.” And he went on to comment on the inscription Dilexit opere et veritate...: “She loved the Church and the Roman Pontiff with true love and with deeds, in the way you and I do.”

In 1970, Pope Paul VI named Catherine of Siena a Doctor of the Church. In 1999, Pope John Paul II named her Co-Patroness of Europe.

Link to “The Dialogue of Saint Catherine of Siena”

Link to “Letters” of Saint Catherine of Siena