A new biographical documentary about Father Joseph Muzquiz, whose cause of canonization was opened in Boston in 2011, will be premiered in upcoming days in several U.S. cities.

The film will premier in Boston , Chicago , Houston , New York , New Jersey and Washington, DC in the next few weeks. (Click on the links above for dates and times in each place.)

Father Muzquiz is the priest who began Opus Dei in the United States. His cause of canonization opened in Boston in June 2011.

Boston’s Cardinal O’Malley said that “we are blessed that the cause of sainthood for Father Joseph Muzquiz, the priest who brought Opus Dei to the United States, is taking place here in the Archdiocese of Boston. Father Muzquiz showed us that the virtue of everyday heroism can be achieved by all people of good faith who open their heart and soul to the gift of God’s graces. This wonderful documentary chronicles Father Muzquiz’s holy and productive life. I pray that it will inspire many people to seek God in their lives.” 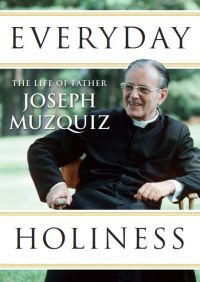 Through numerous interviews with people who knew Father Muzquiz and worked with him, the film documents his youth in pre-civil war Spain, his encounter as a student with St. Josemaría, his work as a professional engineer, his ordination as one of the first three priests of Opus Dei, and the years of intense activity that laid the foundation for Opus Dei’s work in the United States, Canada, Japan and Switzerland.

The film also explores the revolutionary message he received from St. Josemaría—that all people are called to intimacy with Christ, and that we can encounter God in our work and everyday activities.

The Boston premiere will be on Thursday, January 23, at 7:30 p.m. at the Pastoral Center of the Archdiocese of Boston. For more details about the showing in Boston and other cities, visit www.josephmuzquiz.org .

Information about Fr. Joseph Muzquiz's life and cause of canonization.