Saint Josemaria was born on January 9, 1902. Rev. Charles Muturi, an Anglican bishop in Kenya, says that he has recently received a real "miracle" through his intercession. 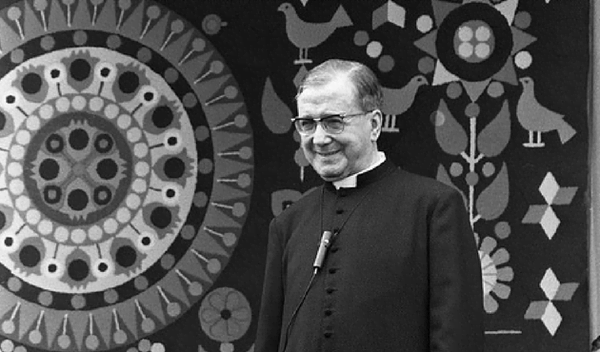 Reverend Charles Muturi, a bishop of the Anglican Church in Kenya, had a son studying in Strathmore University. His son encouraged him to attend the Mass of Saint Josemaría which is normally held around 26th June in Holy Family Basilica in Nairobi. Rev. Muturi attended three years in a row: 2014, 2015 and 2016.

In the 2016 Mass he saw for the first time the prayer card of Saint Josemaría. He decided to entrust to his intercession three intentions that were very dear to him concerning the Bishop Kariuki Centre, an Anglican educational institution that he runs in Kiambu (Kenya).

He asked the Kenyan Government to give recognition for the different courses they offer in the centre, to get the title deed for the piece of land where the college stands and for someone to tarmac the road going to the college. After saying the prayer card he forgot about these matters, but little by little all three intentions began to sort themselves out, without his intervention, until finally they were all solved.

Given the difficulty in sorting out such issues in Kenya he is convinced that it was a miracle, and that God listened to his prayer, through the intercession of Saint Josemaría.

Here is the favor sent by the bishop to the the Opus Dei Information Office in Kenya:

I am an Anglican Bishop in Kiambu. Last year at the feast of Saint Josemaria at Holy Family (Basilica) I said a prayer about our Bishop Kariuki Training Centre and we have obtained favours from God as following: our college is now registered by TVETA to offer KASNEB, CICT and CPA1 courses. We have been promised re-tarmaking of our compound by October and now we are trusting God for the September intake (of students).To God be the Glory and may Saint Josemaría rest in peace as he keeps us in his prayers.