Finding Peace in the Heart of Christ

A homily given by St Josemaria on 17 June 1966, published in Christ Is Passing By.

A homily given by St Josemaria on 17 June 1966, the feast of the Sacred Heart of Jesus, published in Christ Is Passing By.

1. God our Father has seen fit to grant us, in the heart of his Son, "infinite treasures of love," mercy and affection. If we want to find evidence that God loves us — that he not only listens to our prayers but anticipates them — we need only follow the same line of thought as St Paul: "He who did not spare his own Son but gave him up for us all, will he not also give us all things in him?" (Rom 8:32) 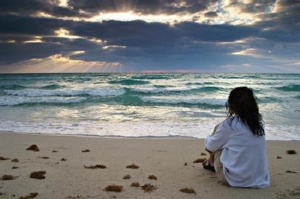 Grace renews a man from within and converts a sinner and rebel into a good and faithful servant. The source of all grace is God's love for us, and he has revealed this not just in words but also in deeds. It was divine love which led the second Person of the holy Trinity, the Word, the Son of God the Father, to take on our flesh, our human condition, everything except sin. And the Word, the Word of God, is the Word from which Love proceeds.

Love is revealed to us in the incarnation, the redemptive journey which Jesus Christ made on our earth, culminating in the supreme sacrifice of the cross. And on the cross it showed itself through a new sign: "One of the soldiers pierced his side with a spear, and at once there came out blood and water." (John 19:34). This water and blood of Jesus speak to us of a self-sacrifice brought to the last extreme: "It is finished" (John 19:30) — everything is achieved, for the sake of love.

Today when we consider once more the central mysteries of our faith, we are surprised to see how very human gestures are used to express the deepest truths: the love of God the Father who gives up his Son, and the Son's love which calmly leads him to Calvary. God does not approach us in power and authority. No, he "takes the form of a servant, being born in the likeness of man." (Phil 2:7) Jesus is never distant or aloof. although sometimes in his preaching he seems very sad, because he is hurt by the evil men do. However, if we watch him closely, we will note immediately that his anger comes from love. It is a further invitation for us to leave infidelity and sin behind. "Have I any pleasure in the death of the wicked, says the Lord God, and not rather that he should turn from his way and live?" (Ezek 18:23) These words explain Christ's whole life. They allow us to understand why he has come to us with a heart made of flesh, a heart like ours. This is a convincing proof of his love and a constant witness to the mystery of divine charity.

The great good fortune which awaits us

2. I must confide to you something which makes me very sorry and spurs me on to action: the thought of all those people who do not yet know Christ, who do not even suspect the great good fortune which awaits us in heaven. They live like blind men looking for a joy whose real name they don't know, lost on roads which take them away from true happiness. How well one understands what Paul the Apostle must have felt that night in Troas when he had a vision in a dream: "A man of Macedonia was standing beseeching him and saying Come over to Macedonia and help us. And when he had seen the vision, immediately we sought to go on to Macedonia, concluding that God had called us to preach the gospel to them." (Acts 16:9-10)

God is calling us

Don't you also feel that God is calling us? Through the things which happen around us he is urging us to proclaim the good news of the coming of Jesus. Yet sometimes we Christians turn our calling into something very paltry. We become superficial and waste our time in dissension and jealousy. Or, worse still, some people are artificially scandalized by the way others choose to live certain aspects of the faith. Instead of doing all they can to help others, they set out to destroy and criticise. It is true that sometimes you find serious shortcomings in Christians' lives. But the important thing is not ourselves and our shortcomings. The only thing that matters is Jesus. It is Christ we must talk about. not ourselves.

These reflections have been provoked by suggestions that there is a crisis in devotion to the sacred heart of Jesus. But there is no crisis. True devotion to the sacred heart has always been and is still truly alive, full of human and supernatural meaning. It has led and still leads to conversion, self-giving, fulfilment of God's will and a loving understanding of the mysteries of the redemption.

However, we must distinguish this genuine devotion from displays of useless sentimentality, a veneer of piety devoid of doctrine. No less than you, I dislike sugary statues, figures of the sacred heart which are incapable of inspiring any trace of devotion in people who have the common sense and supernatural outlook of a Christian. But it is bad logic to turn these particular abuses — which are disappearing anyway — into some sort of doctrinal, theological problem.

If a crisis does exist

If a crisis does exist, it is a crisis in men's hearts. Men are short-sighted, selfish and narrow-minded. They fail to appreciate the great depth of Christ's love for us. Ever since the holy Church instituted today's feast, the liturgy has offered us the nourishment of true piety by including among the readings a text from St Paul. In it he proposes to us a whole program of contemplative life — knowledge and love, prayer and life — beginning with this devotion to the heart of Jesus. God himself invites us in the Apostle's words to follow this way: "May Christ dwell in your hearts through faith; may you, being rooted and grounded in love, have power to comprehend with all the saints what is the breadth and length and height and depth, and to know the love of Christ which surpasses knowledge, that you may be filled with all the fullness of God." (Eph 3:17-19)

The fullness of God is revealed and given to us in Christ, in the love of Christ, in Christ's heart. For it is the heart of him in whom "the whole fullness of deity dwells bodily." (Col 2:9) Were one to lose sight of this great plan of God — the overflow of love in the world through the incarnation, the redemption and Pentecost — he could not understand the refinement with which our Lord deals with us.