Some of the many favors that have been received by those who have gone to the intercession of Fr. Jose Maria Hernandez Garnica 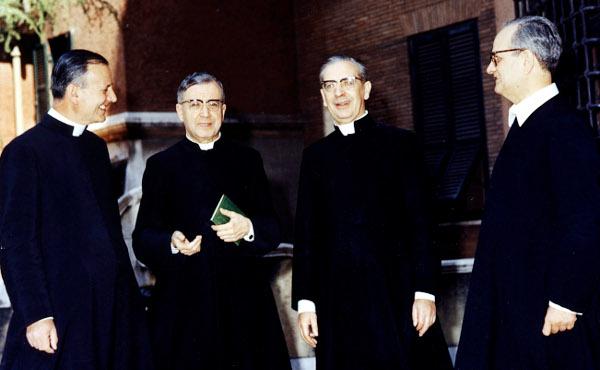 I lost a folder containing important confidential documents at a bus stop. Very upset, I entrusted the matter to Fr. Jose Maria, asking that it to fall into good hands.

Almost immediately after doing so, my cell phone began to ring and a friendly gentleman told me he had found the folder. Realizing the importance of the content, he said he would be happy to give it back to me if I came to his home. Overjoyed, I went to pick it up and told my benefactor what had happened. Then I gave him a prayer card of Fr. Jose Maria, which he was happy to accept.

My daughter’s name is Almudena, but at home we call her “Chiqui”

This summer, I have been in charge of organizing a program for girls who want to go to Ireland for a month to learn English. Knowing that Fr. Jose Maria had begun the apostolic work of Opus Dei in that country, I decided to entrust him with finding people who wanted to sign up.

When I began to pray to him I already had a group of six girls aged 16 to 21. But I was interested in organizing another group for 8 to 13 year-olds, and so far no one had called.

Then a friend phoned to say he had decided to enroll his 12-year-old daughter in the program. The daughter’s name is Almudena, but at home they call her “Chiqui,” he said. Then I remembered that this was also Fr. Jose Maria’s nickname, so it was easy to see his intercession in this first sign-up for the new group. Now every day I am asking him to find at least 3 or 4 new sign-ups.

Happy in his final days

Today a friend and co-worker died who from the beginning of his illness I have been entrusting to the intercession of Fr. Jose Maria.

Before he died he was able to settle all his “earthly” affairs, and also his spiritual ones. With the peace that comes from a serene conscience, he was very happy in his final days here on earth. I am convinced that this was the result of the intercession of Fr. Jose Maria, who helped him to accept his disease with dignity and die in God's grace. This is one of the 15 favors that I have entrusted to the person who, like me, was a mining engineer.