One of the first three priests in Opus Dei, his cause of canonization is now underway. In this brief video, St. Josemaria speaks about visiting him in the hospital shortly before his death in 1972.

A commemorative ceremony entitled "The Value of Fidelity" will be held on November 18 in the Faculty of Communications in Barcelona.

On June 25, 1944 he was ordained a priest. St. Josemaria entrusted him especially with bringing forward Opus Dei’s apostolic work among women in Spain, which he made compatible with many other priestly tasks throughout the country.

Later on he carried out his priestly ministry in a number of European countries, including England, Ireland, France, Austria, Germany, Switzerland, Belgium and Holland.

On November 11, 2011, Cardinal Lluis Martinez Sistach, Archbishop of Barcelona, presided over the transfer of the mortal remains of the servant of God from the Montjuic cemetery to the church of Santa Maria de Montalegre. 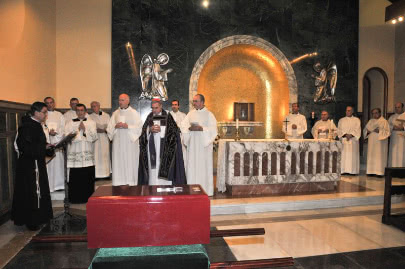 In his homily during the ceremony the Cardinal said: “If God is Holy, Holy, Holy, we too have to be holy.” And making reference to a teaching of St. Josemaria Escriva that the Second Vatican Council promulgated in a solemn manner, and that the servant of God did much to make known, he continued: lay people are specifically called “to be in the middle of the world, as Christian men and women who bring all the Gospel’s values and riches to the structures and institutions of this world.”

For more information about his life and cause of canonization, click here .

Jose Maria Hernandez Garnica was born in Madrid on November 17, 1913, and died in Barcelona on December 7, 1972. He earned doctorates in mining engineering, natural sciences and theology.