Spiritual Communion: a Prayer that Traveled Around the World

An article about the "accidental" discovery of the source of the "spiritual communion" that Saint Josemaria has passed on to so many thousands of people around the world. 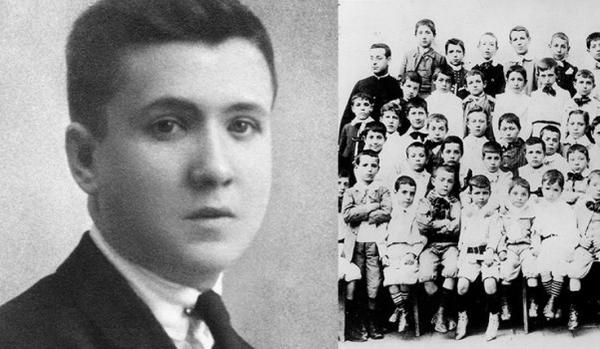 Saint Josemaria as a student, with the photo of one of his classes in the Piarist Fathers' school in Barbastro.

I knew it was from a teacher of his, Father Manuel Laborda, that the founder of Opus Dei learned the “spiritual communion” that has strengthened the Eucharistic piety of so many people around the world. Father Laborda was a teacher in the Barbastro school that Saint Josemaria attended as a young boy. But what is the origin of this gem of Eucharistic piety? Was it a prayer they prayed in the school run by the Piarist Fathers in Barbastro, or did Father Laborda himself compose it? Although I wasn’t trying to discover the origin of this prayer, I found it by chance, a discovery that was truly providential. 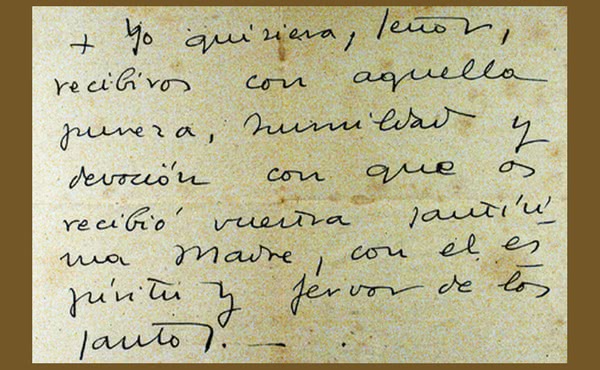 Page 308 in an old catechism

I was carrying out research to publish an article on our Lady in Scripta de Maria, the review of the Mariological Institute of Torreciudad, when I recalled the catechism I had studied in the parish of my home town to prepare for my First Communion: the famous Catechism of Father Ramo, as it was called. I thought that it might be the same one that Saint Josemaria had studied as a young student in Barbastro.

I asked the University of Navarra library is they could provide me with a copy of this. They eventually sent me one in digital format which, due to its poor condition, I could read only with some difficulty.

In the meantime, I contacted the school of the Piarist Fathers in Alcaniz, where the author of this catechism had been rector. They suggested that I get in touch with the Piarist school in Saragossa, where I obtained a copy of the so-called greater catechism: Explanation of Christian Doctrine. According to the method used by the Fathers of the Piarist schools. Presented in the form of a Dialogue between Master and Disciple. By Father Cayetano de San Juan Bautista. Priest of said Piarist Schools. It was printed in Pamplona in the year 1800 and has 357 pages. I began reading it little by little, and great was my surprise to come upon the following prayer, on page 308, where the author is seeking to strengthen the reader’s desire to receive our Lord in Holy Communion: I wish, my Lord and my God, to receive You with the purity, humility and love with which your Most Holy Mother received You, and with the fervor and spirit of the Saints.

Those words from the old catechism seemed to have become, with a few small changes, the prayer used by Saint Josemaria; or perhaps it was Father Laborda himself who had given it this wording. In any case, it was clearly part of the patrimony of the Piarist Fathers’ piety, which that good religious had passed on to Saint Josemaria. Another point that it would be good to clarify is whether the origin of the formula should be attributed to Father Cayetano de San Juan Bautista, or if he took it from some previous author. 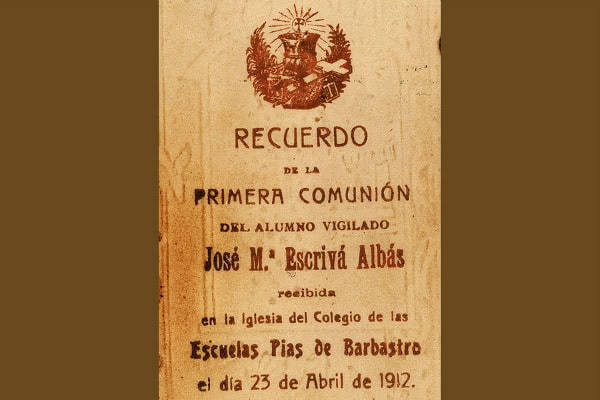 Clear ideas from the catechism

I wrote to the Prelate of Opus Dei, letting him know about my discovery. I also thought he would be happy to have the complete text of the catechism, which I had carefully restored on my computer in digital format, so I sent it to him. I remember the Founder of Opus Dei, in moments of confusion in the life of the Church, recommending that we have recourse to the sure sources, to those old catechisms filled with sound doctrine and piety.

He once told a large group of parents in a get-together: The Church of God and the priests of God, for twenty centuries, have preached the same thing. For as I like to often say, religion has not been made by us men by a vote of hands, by an election. Get hold of those old catechisms! My daughters, my sons: they are wonderful treasures! Don’t throw them away! Read them! Read them calmly in order to preserve the faith of your children.

Now we also have another great instrument to go more deeply into the faith and to make it known: the Catechism of the Catholic Church and its Compendium, as an expression of the perennial faith of the Church.

With no special effort on my part, Providence has guided my footsteps in making this happy discovery. And Saint Josemaria will surely also have had something to do with it!

Father Jesus Sancho is a priest in the diocese of Teruel in Spain and has a doctorate in Theology. He has taught Greek and Dogmatic Theology in the Major Seminary of Teruel, and Theology of the Sacraments in the University of Navarra.