In this article in the Catholic Times, Ozohu Adoh writes of the life of pioneering woman scientist Guadalupe Ortiz, who this weekend in Madrid will become the first lay member of Opus Dei to be beatified. 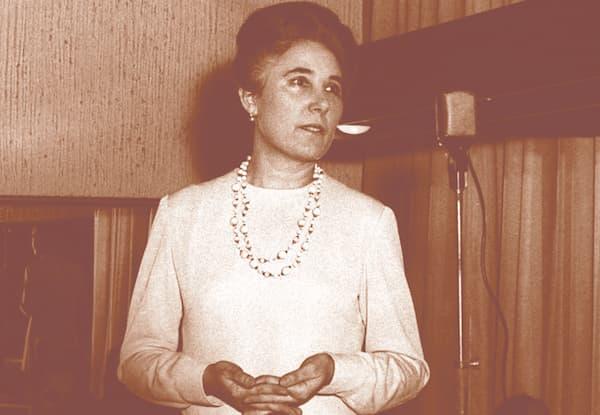 The first lay member of Opus Dei to be beatified will be a woman scientist. Up to now the organisation’s founder St Josemaria Escriva and his closest collaborator, Blessed Alvaro del Portillo, have been raised to the altars and both are clerics. But Guadalupe Ortiz (1916-1975) was a Spanish chemist who worked actively in projects to help poor people in rural areas of Mexico. She will be beatified in Madrid 18 May 2019.

Guadalupe was a pioneer at a time when women in Spain had little access to higher studies. In 1933 Spain when she finished secondary school, not many women went on to university and fewer still studied the sciences. The typical trajectory for most women of the time was to either get married or study a course that was not considered so masculine. As such, Guadalupe was always bucking the trend.

With a boyfriend and a good job, she probably would have got married at some point and had kids like most of her contemporaries. But in 1944 she met St Josemaria Escriva and asked for admission to Opus Dei as a celibate member to seek holiness in the ordinary circumstances of her life. Through her vocation, rather than limiting her life, the vista of Guadalupe’s world was broadened. She went on to an adventure of a lifetime serving God and humanity.

And as in the case of all He loves, God permitted trials early on which perhaps at the time seemed great crosses but which helped to shape Guadalupe’s outlook in life in her later years. In 1928 she suffered a rheumatic fever when her family were stationed in Tetouan, Morocco. This illness contributed in a significant manner to the trials she endured in later years. During the Spanish Civil War, her father was unjustly accused, imprisoned and executed in 1936 by the Republican faction. Guadalupe accompanied him till the very end, stoically supporting her parents in this bitter moment. Despite this injustice, Guadalupe never held grudges against those responsible and when at a future date she met people who were closely related to this episode, she opened her heart to them with love.

In the first chapter of the book, Letters to a Saint which encapsulates the correspondence she had with St Josemaria, Guadalupe is referred to as a “next-door neighbour” saint. This was due to how she lived her vocation. She struggled every day, at first against her own personal weaknesses and defects and later as a result of the debilitating illness she suffered from. Despite all the challenges and struggles, she maintained a positive and spiritual outlook. She saw her defects clearly but was never discouraged and constantly strived to rectify and try again. She believed always that God will help her become better. That trust in God was evident in the way she made herself available to serve Him and others.

On 5 March 1950, Guadalupe arrived in Mexico to begin the apostolic work of the women of Opus Dei in that country. With her usual gusto and complete trust that God will provide, she and a few others started a residence for university students and began providing means of formation for the ladies in the city.

One of the key initiatives Guadalupe started which made such deep impressions on Mexicans and carries on today, was the work done with rural girls in Mexico. Upon the invitation of the bishop of Tacambaro to help with apostolate in his diocese, a proposal to create a place in which rural girls could live with dignity and learn a suitable profession that would in turn help their families who were mostly farmers was put forward. Again, Guadalupe took on this task with zeal. She began work with the girls teaching them the alphabet and the necessary skills for the works of the home as well as Christian doctrine.

Guadalupe had strength of character and extraordinary courage. Her optimism led her always to look beyond and ahead to what was left to be done always believing that she was not doing enough. It was this mindset that led to the establishment of a school-farm for rural women, Montefalco. Montefalco was a badly dilapidated villa that had been ransacked and some part of it burnt in the Mexican Revolution. It had been kindly donated by a benefactor. The state of the building did not deter or discourage Guadalupe and her companions. Instead, she had a vision of what it could become. More than fifty years later, this school still exists serving its surrounding neighbourhood.

Guadalupe tried to live the vision of the Founder of Opus Dei faithfully. She was always available and in almost all her letters she concludes, “I am happy with what I am doing but I am always available to go anywhere else you may want to send me”.

On 5 October 1952 Guadalupe was stung by a poisonous insect whilst giving a talk and fell gravely ill. This poison, coupled with the earlier illness from Morocco, contributed eventually to a weakened heart which was the direct cause of her death on 16 July, 1975.

Guadalupe left Mexico for Rome in 1956 to help in the governance of the women section of Opus Dei. However, her time there was truncated due to ill health. In her typical style, Guadalupe used her illness as an opportunity to serve God even more, offering her suffering for so many intentions. This ill-health did not deter her from working hard. In spite of her diagnosis, she went on to complete and defend her doctoral thesis in 1965 with excellent results. She gained a Doctorate in Chemistry in her later years and taught at the prestigious Ramiro de Maeztu institute in Madrid, in addition to giving classes at other research centres. She continued to teach until her final entry into hospital in 1975.

Guadalupe was a scientist ahead of her time, with an environmental focus which makes her very relevant for our times. Her doctoral thesis was a novel study, analysis and practical application of maximising the utility of recyclable materials and energy saving using the refractory value of ashes of rice husks. This was before recycling and responsible energy use became a popular practice.

As a good chemist, Guadalupe had what she called formulas for holiness. This was a way of using her passion for chemistry and translating its concepts into solving daily challenges in her vocation and profession.

Effervescence is how she described the happiness she felt and which was the guiding principle of her outlook to all she did. “We experience effervescence when we feel happy”, she wrote. “The ‘reagent’ of total trust in God produces immense joy, even when we still experience the ‘sodium’ of our defects.” In many letters to friends and others, she consistently described her joy in times when things were going well and even when they weren’t in her struggles for holiness. She maintained this effervescence till the very end. A friend described Guadalupe after a major heart surgery, as not haven’t even for a second lost her typical cheerfulness and peace, despite being fully aware of the precarious nature of her situation. May her example encourage us all to strive for sanctity.