Many people with devotion to Venerable Montse Grases celebrated the 80th anniversary of her birth in a special way to thank her for the favors received through her intercession. 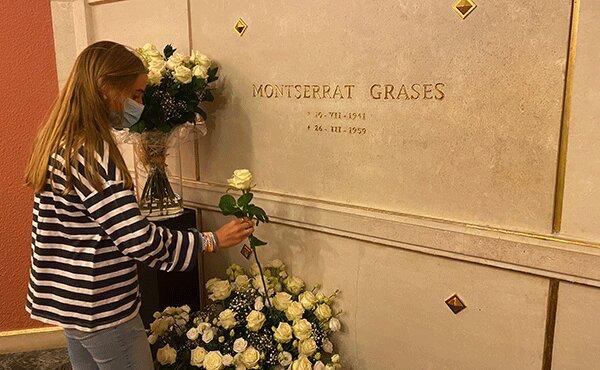 The idea of bringing white roses to the crypt in the Oratory of Santa Maria de Bonaigua in Barcelona, where the remains of Montse Grases rest, began to take shape in June.

Despite the exams at the end of the school year and restrictions due to the pandemic, many people wanted to celebrate in a special way the 10th of July, the anniversary of Montse’s birth.

Surely people all over the world would like to thank her personally for so many favors received through her intercession, but the distance makes it impossible for them. But people living in Barcelona could visit the crypt to pray on the day of her anniversary and even bring her some flowers.

Fina, a “friend” of Montse who now resides in Murcia, but who for a time lived in Barcelona and is part of the Committee of Friends of Montse Grases, shares how the initiative of the white roses came about. “It occurred to me that the young people near the Oratory might like to make an offering of white flowers throughout the day. Reaching 80 roses seemed a bit unrealistic. But there is a lot of devotion to Venerable Montse and the Internet exists! First 8 roses arrived from children of friends, then 15, and the number kept growing. When the oratory opened on the 10th, the day of her birthday, there were already 80 roses there.” 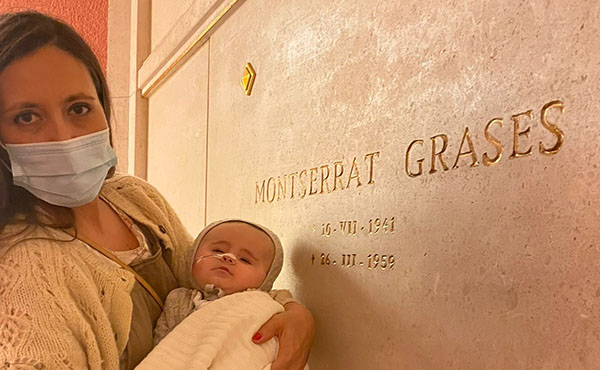 A rose, a favor, a thank you

Early on the morning of the 10th, people began arriving at the Oratory. Their visit had to be brief, since the crypt is quite small and only two or three could be there praying at the same time. Beside the tomb is the image of our Lady that Montse so often looked at with love during her lifetime.

The first rose was left by a man on behalf of his family. He said it was out of gratitude and devotion to Montse as well as affection for the Work. Soon after a bouquet of roses arrived from Terralta, on behalf of students in this center of the Work who take part in the means of formation there.

People wanted to remain in the crypt praying for some time, but due to the pandemic it was requested that they limit their time there so that those waiting could enter.

In the afternoon, a wide variety of people continued to arrive: adults and adolescents, elderly people, and even a baby. There was a lot of silence and prayer. Some placed their hand on the tombstone, to connect more closely with Montse and get her attention.

Tere, who is studying to be a teacher, says: “I know very little about Opus Dei. But I’m impressed by seeing the joy Montse creates around her, and the story of her life and her smile. Seeing the photos at the entrance to the crypt brings me great joy and I like to pray with her. I didn’t know that today was her 80th birthday.”

Almudena is studying architecture. She too is just beginning to get to know about Opus Dei, and her visits here have given her a great affection for Montse, also because of the favors she has received. “I'm very excited to be here on her 80th birthday,” she says. “My only request today has been to ask her to obtain many miracles for those who come here so that she may be canonized soon.”

Devotion to Montse has spread to many distant places all over the world. Amaka, who is from Nigeria and lives in a nearby center of the Work, has also come to the crypt to pray and to congratulate Montse Grases on her birthday. 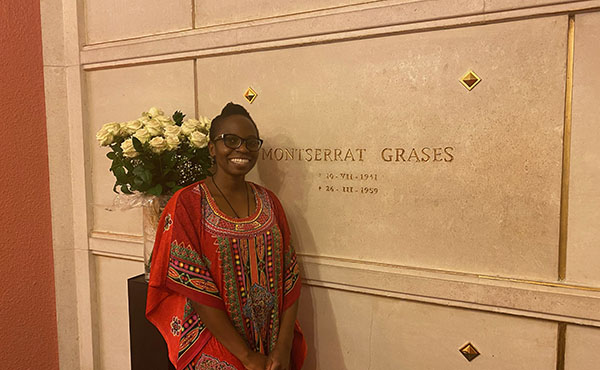 Finally Mariangeles has come “to bring roses for two people, to thank Montse for two favors. I’m bringing one rose for a nephew of mine who is a priest and whose every step towards the priesthood I have entrusted to Montse’s intercession, and who says that he owes his vocation to Montse. And another rose for a friend of mine, now the mother of a young girl who the doctors didn’t think would survive but for whom we have prayed a lot to Montse Grases. Now she is receiving stimulation treatment and it seems she will be fine.”