The first article in the new series “As in a Film.” After the Resurrection, in his conversation with the Risen Jesus beside the lake, Peter discovers the key to his own greatness. 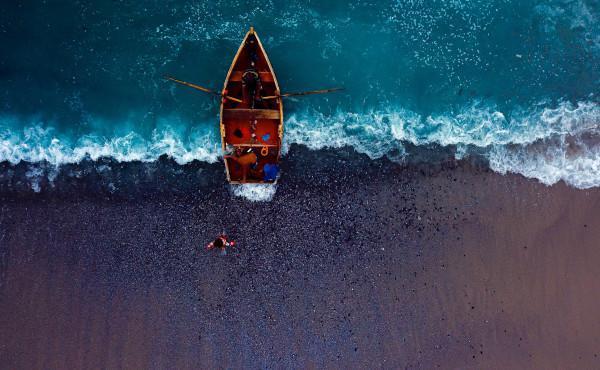 We all probably have a list of favorite films, those that have left a special mark on us. The reasons for this may be quite varied: an interesting plot, the strong emotions it provoked, a character with whom we identified more closely… Sometimes it is simply the fact that we associate it with an important event in our own life, a special occasion.

The same is true of the Gospel. Certain passages have been a special help to us at specific times or we go to them more often because we find they assist our prayer. Something similar would have happened with the Apostles. Each would recall a specific occasion in their dialogue with Jesus that they meditated on more frequently. “It is good for all of us to ask for the grace to preserve the memory of all that our Lord has done in my life.”[1] If we put ourselves in Peter’s shoes, it is easy to imagine how he would have joyfully reflected time and again on his conversation with our Lord after the Resurrection (cf. Jn 21).

A walk along the shore

The Apostles had spent the entire night fishing without success. It was not the first time this had happened to them. Three years ago, when Jesus had first called them, they had also worked all night in vain.

On their way back to shore, they suddenly see in the distance someone standing by the lake. The mysterious figure gives them a command: “Cast the net on the right side of the boat.” They obey, and their nets quickly fill with fish. Three years ago, at the beginning of his public life, Jesus had also told them to let down the nets for a catch after a night of fruitless toil, and they had caught a great quantity of fish. Now the memory of that day comes flooding back to them, and they realize that it is our Lord who is addressing them. The first to do so is John, the youngest.

Peter jumps into the water. Impatience overpowers him, and he wants to reach the Master as quickly as he can. When the other Apostles reach the shore, “they saw a charcoal fire there, with fish lying on it, and bread.” Jesus tells them to bring some of the fish they have just caught and invites them to sit down with Him. After they have eaten, we can imagine Jesus asking Peter to go with him for a walk by the lake. Just the two of them. A moment of being close to our Lord that Peter will never forget.

Jesus probably is silent at first. They walk slowly. Peter knows he is with the Risen Christ. But what can he say to Him? He still has fresh in his memory his three denials: “I don’t know this man, I don’t know what you are talking about…” It is our Lord who takes the initiative. He asks Peter: “Simon, son of John, do you love me more than these?” The memory of his sin, of his abandonment of Jesus overwhelms him. Sin is an experience that we all have, so it is easy for us to place ourselves in that scene, to hear the Master asking us the same question with our own name. Peter’s answer is quite bold, considering how he had acted before the Passion: “Yes, Lord; you know that I love you.” And he is surprised to hear our Lord say, with a trust in him that Peter didn’t expect: “Feed my lambs.”

The change in Peter

They continue walking. The only thing that breaks the silence is the sound of their footsteps and the waves breaking on the shore. After a short pause, it is again Jesus who speaks first: “Simon, son of John, do you love me?” It is the second time that Jesus asks the same question. Perhaps Peter would think that his first reply hadn’t sounded very convincing, and he needed to speak more forcefully: “Yes, Lord; you know that I love you.” Jesus answers in the same way, showing again his trust in him: “Tend my sheep.”

They continue along the lake. When Jesus puts the same question to him for a third time, Peter is downcast. Possibly he remembers that other conversation he had with our Lord before the Passion. The Gospel of Saint Mark tells us that on their way to the Garden of Olives, Jesus had told his disciples that they would all abandon Him. “You will all fall away; for it is written, ‘I will strike the shepherd, and the sheep will be scattered.’” Peter was the first to respond: “Even though they all fall away, I will not.” But our Lord told Peter that he too was included here: “Truly, I say to you, this very night, before the cock crows twice, you will deny me three times.” And Peter had stubbornly insisted: “If I must die with you, I will not deny you” (cf. Mk 14:26-31). He certainly would have been convinced of the truth of his words; it was not a naïve statement or an insincere one. In fact, just a few minutes later he would take out his sword and try to defend our Lord from the crowd seeking to lay hold of Him.

Nevertheless, despite that impetuous deed, we know what took place. When Peter said “I will not deny you,” he had put more trust in himself than in our Lord’s words. He thought that, in order to be faithful, his own strength and determination were enough. And so now, when our Lord asks him for the third time whether he loves Him, his reply is based solely on his trust in Jesus: “Lord, you know everything; you know that I love you.” It is as though he were saying: “If I am now sure that I love you, it is no longer because I have great confidence in my own possibilities, but simply because I have learned that you are the support of my love, of all the good that I possess. I have discovered that I have to rely on you.”

Our Lord’s reply to Peter’s words would have filled him with joy, since he realizes that Jesus still has confidence in the one who will be the Rock of his Church: “Feed my sheep.” Peter’s good intentions are no longer based on his own abilities or talents, but on his contrition. Therefore Peter now is much stronger, because he is much more aware of his own weakness. He knows with greater realism who he is and who our Lord is.

Peter gives us a valuable lesson here. At times, when things are going well, we may think that our own talents are the cause. But later, when they begin to go badly, when we make a mistake, it might seem to us that we are worthless and we let ourselves be overcome by sadness. Peter teaches us how to find our strength in our Lord, to let ourselves be loved, to trust not in ourselves but in Jesus. And then we will be able to tell Him that we love Him: because He knows it.

Because He wants to

The founder of Opus Dei used to define humility as “the virtue which helps us to recognize, at one and the same time, both our wretchedness and our greatness.”[2] This might seem paradoxical, since sometimes we think that humility means recognizing what we do badly and not giving importance to our good qualities. But Saint Josemaria insists that the recognition of our defects and of our strengths have to go hand in hand. For God always loves us.

“Do not become alarmed or discouraged to discover that you have failings… and such failings! Struggle to uproot them. And as you do so, be convinced that it is even a good thing to be aware of all those weaknesses, for otherwise you would be proud. And pride separates us from God.”[3]

Humility means knowing and accepting the truth about ourselves, in the light of God’s love. God loves us not because of the good things we may do, but simply because of who we are. He loves us because He wants to.

From that conversation beside the lake, Peter learns to accept the love that Jesus freely offers him. He doesn’t need to do great things to attain it or to merit it; he only needs to let himself be loved as he is. From then on Peter’s life will change. He will begin to see successes and failures always in the light of God’s love. Peter will truly be the Rock upon which the Church is built. And as in a good film, he will not tire of recalling time and again that scene in which he rediscovered the key to own greatness: that God loves him because He wants to.