Vittorio Gervasi, Italian, says he, "thanks Saint Josemaria for having opened up for me the doctrine of the Church about human love and courtship with his practical teachings." 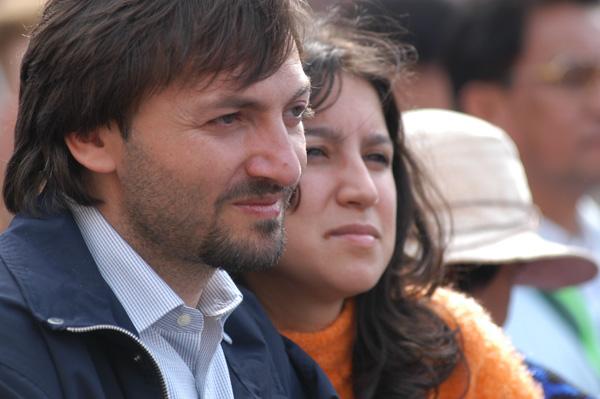 Marriage is such an important step that it requires careful preparation, following the sort of advice Saint Josemaria gave to young people setting out on this path.

It is an adventure and a beautiful one, even today. Nowadays anyone thinking of getting married is assailed by a thousand doubts. “Is it real love? Will it last for ever? How can I be sure? What if things get difficult? Why do so many marriages break down?” The adventure is still a beautiful one, because it’s all about discovering genuine love. The sort of advice which Saint Josemaria used to give young men was, “When you are thinking about getting engaged, think that she could be the mother of your children,” and, in consequence, “always look at her as someone who deserves absolute respect” (cf. Conversations, 105 and 121).

With our friends, we have tried to sort out the most common problems which make it difficult these days to create the kind of relationship between a man and a woman that can lead to a good marriage.

Accordingly, a group of friends and I set up a series of meetings in a pub in Rome where young people normally gather to listen to jazz over a beer. In a place like that you can see how Saint Josemaria’s message is within everyone’s reach. The young men and women who have joined in our meetings were attracted by questions such as: “Should we get married or live together?”, and many of them have come to realize that a sincere, loving relationship is something demanding – a holy demand (cf. The Way, 387) which might perhaps look like stubbornness when it means saying no to one’s boyfriend or girlfriend out of respect for the body, for sexuality, and for God’s plan. But it also means being able to say a total “yes” afterwards, which leads to great riches.

With our friends, we have tried to sort out the most common problems which make it difficult these days to create the kind of relationship between a man and a woman that can lead to a good marriage. Several of the people we invited to speak to our group know and live by the teachings of Saint Josemaria. These include a psychiatrist who has been married for several years himself, and helps couples who are in difficulties; a psychologist who teaches couples how to dialogue, and others.

I thank Saint Josemaria for having opened up the doctrine of the Church about human love and courtship with his practical teachings; and for having given me the confidence to share these truths with so many friends.

The advice given by Saint Josemaria is accessible to all. It is a wonderful help, showing how, when both the man and the woman hold by certain principles, a loving relationship can be lived right from the start as a special preparation for a good marriage.

Thanks to these meetings, many people have come to understand that they have to have the courage to face up to the basic choices in their lives – marriage – seriously, starting when they are just going out together. Some have got married, others have changed their way of life, and many others seem to have done nothing, but are still thinking things over and asking for more.

By living in this way during dating and engagement, we are laying firm foundations for a strong marriage that will stand up to life’s difficulties. Only like that can we respond fully to the project that Jesus Christ, “a madman – madly in love” (The Way of the Cross, Sixth Station) has for each of us.

We have to be convinced that human love really can be sanctified. We have to react as Saint Josemaria taught us against the errors of our time, the false propaganda which the media relay every day, about sexuality outside the self-giving of marriage. That only ends up wounding people, and threatens the whole of society with incalculable harm. Is the ideal that I am putting forward an unattainable one? We can’t attain it alone, but if we habitually talk with the Lord in prayer and relate to him in the Sacraments, we’ll be able to get up again after our falls even when times look bad, when we face the difficulties and defeats which are part and parcel of our human frailty.

We can ask our Mother the Virgin Mary, Mother of Fair Love to obtain for us the gift of a clean and holy life – and we can be sure that she will hear us. And I thank Saint Josemaria for having opened up the doctrine of the Church about human love and courtship with his practical teachings; and for having given me the confidence to share these truths with so many friends. I’m very happy about all of this, and, having got married a short time ago, I’m already able to appreciate the results.