Commentary on the Gospel: The Prodigal Son

Gospel for the 4th Sunday of Lent (Cycle C) and commentary. 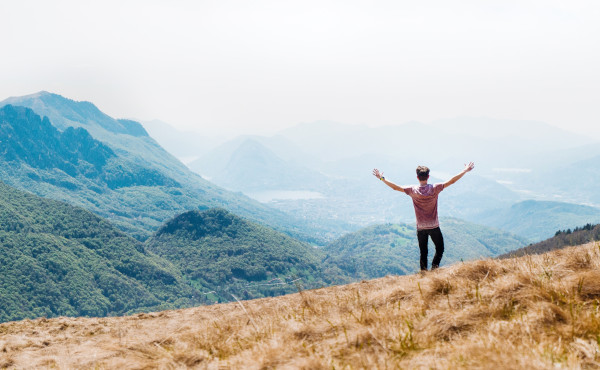 Now the tax collectors and sinners were all drawing near to hear him. And the Pharisees and the scribes murmured, saying,

“This man receives sinners and eats with them.”

So he told them this parable:

“There was a man who had two sons; and the younger of them said to his father, ‘Father, give me the share of property that falls to me.’ And he divided his living between them. Not many days later, the younger son gathered all he had and took his journey into a far country, and there he squandered his property in loose living. And when he had spent everything, a great famine arose in that country, and he began to be in want. So he went and joined himself to one of the citizens of that country, who sent him into his fields to feed swine. And he would gladly have fed on the pods that the swine ate; and no one gave him anything. But when he came to himself he said, ‘How many of my father’s hired servants have bread enough and to spare, but I perish here with hunger! I will arise and go to my father, and I will say to him, “Father, I have sinned against heaven and before you; I am no longer worthy to be called your son; treat me as one of your hired servants.”’ And he arose and came to his father.

“But while he was yet at a distance, his father saw him and had compassion, and ran and embraced him and kissed him. And the son said to him, ‘Father, I have sinned against heaven and before you; I am no longer worthy to be called your son.’ But the father said to his servants, ‘Bring quickly the best robe, and put it on him; and put a ring on his hand, and shoes on his feet; and bring the fatted calf and kill it, and let us eat and make merry; for this my son was dead, and is alive again; he was lost, and is found.’ And they began to make merry.

“Now his elder son was in the field; and as he came and drew near to the house, he heard music and dancing. And he called one of the servants and asked what this meant. And he said to him, ‘Your brother has come, and your father has killed the fatted calf, because he has received him safe and sound.’ But he was angry and refused to go in. His father came out and entreated him, but he answered his father, ‘Lo, these many years I have served you, and I never disobeyed your command; yet you never gave me a kid, that I might make merry with my friends. But when this son of yours came, who has devoured your living with harlots, you killed for him the fatted calf!’ And he said to him, ‘Son, you are always with me, and all that is mine is yours. It was fitting to make merry and be glad, for this your brother was dead, and is alive; he was lost, and is found.’”

Jesus’ desire to save all men and women also included those known publicly as “tax collectors and sinners.” His open and hope-filled attitude towards them gave rise to jealousy and murmuring among the Pharisees. Therefore Jesus offers us in Saint Luke’s gospel the famous parables of mercy that reveal God’s immense joy when we return to him with a contrite heart.

After narrating how a shepherd with a hundred sheep greatly rejoices to recover the one that goes astray, and how the woman with ten coins joyfully finds the one she lost in her house, Jesus tells us this Sunday the beautiful parable of a father who had two sons: one lost outside, in a distant country, and the other lost inside, in his own house.The story of both sons teaches us the need to be contrite and understanding. And in the father’s mercy we discover a magnanimous love for the freedom of others and a serene hope in the possibility of redemption.

The story of the prodigal son, with its marvelous simplicity, presents a challenge to everyone. The classic human mistake of confusing happiness with the satisfaction of unbridled desires is seen in the younger son, who has been given the name “prodigal” because of his father’s prosperity. He has allowed his poor heart to give free reign to all its desires, whether upright or not, without the limits provided by the stability of his father’s home. His heart lacks self-dominion and he feels restrained at home. But by wasting his inheritance in a distant land, he soon realizes that he is much less free outside his home. Reduced to caring for another person’s swine, when a famine comes he longs for the food being fed to these animals, seen by Jews as unclean. It is then that all the love his father has lavished on him over the years stirs up amid the darkness of his heart a longing for home, and leads to a humble conversion. And he “returned to his senses.”

During this time of Lent we can all see ourselves depicted in the son who stands in need of conversion and forgiveness. Saint Josemaria said: “Human life is in some way a constant returning to our Father’s house. We return through contrition, through the conversion of heart that means a desire to change, a firm decision to improve our life and which, therefore, is expressed in sacrifice and self‑giving. We return to our Father’s house by means of that sacrament of pardon in which, by confessing our sins, we put on Jesus Christ again and become his brothers and sisters, members of God’s family.”[1]

Jesus also invites us to show the understanding and mercy that the father in the parable did. The description of his gestures and attitudes is quite moving, and reflects both God’s fatherly heart and the virtues a good educator needs. The father respects the son’s freedom, and doesn’t try to control him, which could lead to distancing him even further. He trusts with heroic patience on the affection and care he has poured out in raising him, and keeps scanning the horizon anxiously each day for his return. And as the reward for his great magnanimity, the father recovers his beloved son. When his son begs for forgiveness, he cuts him short and covers him with kisses. And he organizes a joyful feast and gladly restores to him his lost status.

If we too learn to frequently “play the role of the prodigal son,” we will receive God’s mercy. And we will learn how to be merciful towards others and to love their freedom, like the father in the parable. We will also avoid becoming like the older son, lacking in understanding and filled with zeal for his father’s house, but a bitter zeal, with the same lack of freedom we see in the younger brother. As Pope Francis said: “The parable is left open-ended: we do not know what the older son decided to do. And this is an incentive for us. This Gospel passage teaches us that we all need to enter the House of the Father and to share in his joy, in his feast of mercy and of brotherhood. Brothers and sisters, let us open our hearts, in order to be ‘merciful like the Father’!”[2]