University of Asia & the Pacific

In its institutional programs and activities, UA&P puts due emphasis on the individual; the family; the community; and the world. Each unit of the University thus strives to be a center of excellence, particularly in three areas: values formation, people development, and research and communication. These are the hallmarks of UA&P as an educational institution.

Fresh from his studies at Harvard University in 1965, Dr. Jesus P. Estanislao, along with some friends, started to work on what they called “a fanciful wish.” They dreamed of establishing an institution that would promote enlightened interaction between the government and the private sector. Three years later, the embodiment of this dream, the Center for Research and Communication (CRC), was established as a private voluntary organization with core operations in research and communication, together with training programs in industrial economics.

As the seed of a future university, CRC started out small and inconspicuous.

In 1970, in a private meeting in Mexico City, Msgr. Josemaria Escriva, the founder of Opus Dei, an institution of the Catholic Church to which CRC’s spiritual and doctrinal orientation had been entrusted, encouraged Dr. Estanislao to expand CRC’s horizons beyond the Philippines and Southeast Asia. Msgr. Escriva’s words became a challenge and an inspiration for the people at CRC to work toward transforming their think tank eventually into a university. That year, CRC opened its first graduate program, the Master of Science in Industrial Economics.

In 1982, CRC moved to its new offices in Ortigas Center, Pasig. By then, its formal and non-formal programs in economics had been well established. CRC had also gained international recognition as an economics and business think tank.

In 1987, CRC set up its Institute of Development Education, which would be the forerunner of the School of Education of the envisioned university.

In 1993, CRC applied for university status. It formally established its School of Economics and School of Education, and set up its Center for Management.

On June 26, 1995, exactly two years after CRC applied for university status, Education Secretary Ricardo Gloria signed the certificate converting CRC into the University of Asia and the Pacific (UA&P). The actual signing took place in a public school near the Ninoy Aquino International Airport. 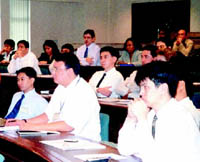 On CRC’s metamorphosis into a university, a Filipino journalist has written: “The University of Asia and the Pacific… is an attempt to chart a new course… It reflects what we sorely need today, a pursuit of excellence. If that is a spur to others, wonderful. If not, then others will be left behind. What is important is not who wins the race in Philippine education, but that there is a race at all.”

For CRC and now the UA&P, though, the mission remains the same: the total education of tomorrow’s leaders.

In its institutional programs and activities, UA&P puts due emphasis on the individual; the family; the community; and the world. Each unit of the University thus strives to be a center of excellence, particularly in three areas: values formation, people development, and research and communication. These are the hallmarks of UA&P as an educational institution.

UA&P is committed to the inculcation of time-tested human values and attitudes, particularly discipline, diligence, spirit of enterprise, integrity, social solidarity, and a universal outlook. The University’s academic programs always include courses in social and professional ethics.

UA&P works through its social development arm, the Office of People Development, to help build model communities through integrated development programs that enable people, particularly the poor and marginalized, to help themselves. These programs include savings mobilization, values formation, general and technical education, health and nutrition, environmental quality, and cooperativism.

As an academic community, UA&P carries on the foundational aims and tradition of its forerunner, the Center for Research and Communication. Hence, the University continues to undertake high-level, interdisciplinary research for the good of society and to communicate the results of such research through various media and varied audiences. Research at UA&P aims, above all, at a synthesis of humanistic, professional, scientific, and technical knowledge, inspired by a Christian view of man.