"The Holy Spirit is the creator of communion"

Continuing his catechesis on the Acts of the Apostles, in his 19 June general audience Pope Francis said that "prayer is the 'lung' that gives breath to disciples of all times; without prayer it is not possible to be a disciple of Jesus." 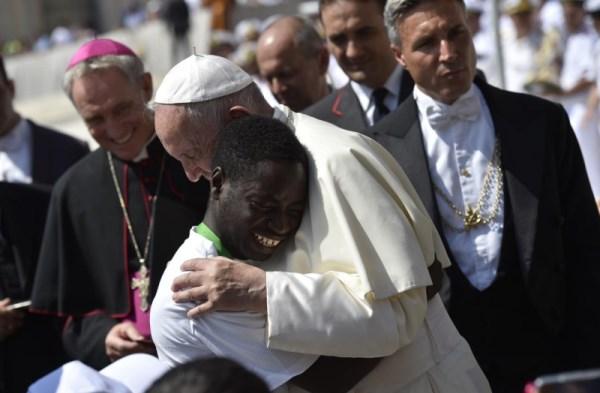 Fifty days after Easter, in the cenacle that was by then their home and where the presence of Mary, Mother of the Lord, was the cohesive element, the Apostles experienced an event that exceeded their expectations. Gathered in prayer – prayer is the “lung” that gives breath to disciples of all times; without prayer it is not possible to be a disciple of Jesus, without prayer we cannot be Christians! It is the air, it is the lung of Christian life – they are surprised by the irruption of God. It is an irruption that does not tolerate being closed: it throws open the doors with the force of a wind that recalls the ruah, the primordial breath, and fulfils the promise of “strength” made by the Risen Christ before He took leave of them (see Acts 1: 8).

Suddenly “a sound like the blowing of a violent wind came from heaven and filled the whole house where they were sitting” (Acts 2: 2). The wind was then joined by the fire that recalls the burning bush and Sinai with the gift of the ten words (see Ex 19: 16-19). In the biblical tradition the fire accompanies the manifestation of God. In the fire God delivers His living and energetic word (see Heb 4: 12) which opens up to the future; fire expresses symbolically His work of warming, illuminating and infusing wisdom in hearts, His care in testing the resistance of human works, in purifying them and revitalizing them. While at Sinai the voice of God is heard, in Jerusalem, on the feast of Pentecost, it is Peter who speaks, the rock on which Christ chose to build His Church. Though His word is weak and even capable of denying the Lord, when the fire of the Spirit passes through it, it gains strength, becomes capable of piercing hearts and moving to conversion. God in fact chooses what is weak in the world to confuse the strong (see 1 Cor 1: 27).

The Church is thus born of the fire of love, and of a “fire” that breaks out at Pentecost and that manifests the strength of the Word of the Risen One imbued with the Holy Spirit. The new and definitive Covenant is founded no longer on a law written on stone tablets, but on the action of the Spirit of God Who makes all things new and is engraved in hearts of flesh.

The word of the Apostles is imbued with the Spirit of the Risen One and becomes a new word that is different, but that can be understood, as if it were translated simultaneously into all the languages: indeed, “each one heard their own language being spoken” (Acts 2: 6). It is the language of truth and love, which is the universal language: even the illiterate can understand it. Everyone understands the language of truth and love. If you go with the truth of your heart, with sincerity, and you go with love, everyone will understand you. Even if you cannot talk, but with a caress, that is truthful and loving.

The Holy Spirit not only manifests Himself through a symphony of sounds that unite and harmonically form diversity, but presents Himself as the conductor of an orchestra that plays the scores of praises for the “great works” of God. The Holy Spirit is the creator of communion, the artist of reconciliation who knows how to remove barriers between Jews and Greeks, slaves and freemen, to make a single body. He builds up the community of believers, harmonizing the unity of the body and the multiplicity of the members. He makes the Church grow by helping her to go beyond human limits, sins and any scandal.

The wonder is so great, that one might ask if those men were drunk. Peter then intervenes on behalf of all of the Apostles, and rereads the event in the light of Joel 3, where a new effusion of the Holy Spirit is announced. Jesus’ followers are not drunk, but they live what Saint Ambrose defines as the “sober intoxication of the Spirit”, which ignites prophecy in the midst of the people of God through dreams and visions. This prophetic gift is not reserved just to a few, but to all those who invoke the name of the Lord.

From then on, from that moment, the Spirit of God moves hearts to welcome the salvation that passes through a Person, Jesus Christ, He Whom men nailed to the wood of the cross and Whom God revived from the dead, “freeing Him from the agony of death” (Acts 2: 24). And it is He Who poured out the Spirit that orchestrates the polyphony of praise and that all may hear. As Benedict XVI said, “Pentecost is this: Jesus, and through Him God Himself, actually comes to us and draws us to Himself” (Homily, 3 June 2006). The Spirit works through divine attraction: God seduces us with His Love and thus involves us, to move history and initiate processes whereby new life filters through. Indeed, only the Spirit of God has the power to humanize and fraternize every context, starting from those who welcome Him.

Let us ask the Lord to let us experience a new Pentecost, which opens up our hearts and harmonizes our sentiments with those of Christ, so that we are able to announce His transforming word without shame, and bear witness to the power of love that restores to life all that it encounters.