Symposium on the Beauty of Human Love

Luis Chiva is director of the Department of Gynecology at the University of Navarra Hospital. Within the framework of the Amoris Laetitia Family Year convoked by Pope Francis, he has begun organizing a symposium on Natural Fertility Awareness, which will take place in September. 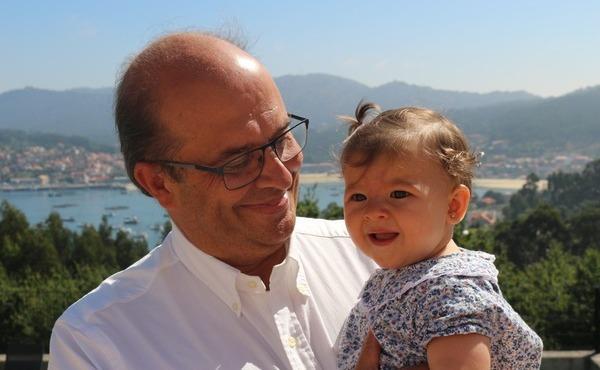 Luis Chiva with his granddaughter.

I feel very honored to be able to explain to you some of the activities that we carry out in the Department of Gynecology and Obstetrics. Our concern for women’s health includes many different aspects, such as early recognition and treatment of cancer, assisting couples who cannot have children, offering fertility treatments, following pregnancies closely and helping mothers when giving birth.

This department in the University of Navarra Hospital has a clear sense of mission in topics related to life. We try to be a beacon of light for the Christian meaning of sexuality and respect for life.

Recently the Prelate has asked the people in Opus Dei to foster personal initiatives that give witness to a Christian vision in daily life. In my case, as a medical professional, I am collaborating in a project to provide help to expectant mothers whose children may live for only a very short time. In reality, it is an initiative for perinatal palliative care.

We have had many marvelous experiences and are trying to seek funds to help these women, who are usually only offered the advice to end their pregnancy. In this way, although a child’s life may be quite short, we try to ensure that these babies die in the arms of their mother, with the least discomfort possible and surrounded by the affection of their family. We accompany the families closely and are at their side. And it enriches these persons whom we help so much, as well as enriching us in the department.

We also try to accompany women who encounter difficulties in becoming pregnant and who seek alternatives in assisted reproduction. We have developed a protocol of diagnosis and rigorous scientific treatment, which can assist these couples while respecting the nature of the conjugal relationship, the dignity of the embryo, and the reproductive process. We are having quite a bit of success.

Finally, we are aware of the help that couples need who want to space their pregnancies without resorting to contraception. From the 60’s, after the sexual revolution, a debate arose about the best way to space childbirths. Taking into account Humane vitae, John Paul II’s theology of the body, and the Amoris laetitia Family Year convoked by Pope Francis, we think it is of great interest to carry out a deep, multidisciplinary reflection on the topic of Natural Fertility Awareness, in light of recent teachings of the Church on this point.

Therefore, on the 22nd, 23rd, and 24th of September we will hold a multidisciplinary international symposium on Natural Fertility Awareness organized by the University of Navarra, in collaboration with José Antonio Arraztoa, from the Department of Gynecology at the University of the Andes in Chile. and Jose Granados, from the Veritas Amoris Project in Madrid.

The symposium, which will be held in Pamplona for those who can attend personally, is also open to anyone who wants to take part online. Registration is free, and we already have almost 700 people signed up from 40 different countries. (Simultaneous Spanish-English-Spanish translation will be provided.)

We will be speaking about the deep beauty of human love and the Christian meaning of sexuality, also of course from the standpoint of health. The more academic part of the symposium will take place in the afternoon, with the aim of reaching the American continent as well. In the mornings some workshops will be held on how to recognize the window of fertility, and on accompanying couples who want to use the natural means of fertility. There will be a special workshop led by Drs. Enrique and Marian Rojas entitled Love and Being in Love: Seven Golden Rules for Living as a Couple. Another workshop, which is already attracting great interest, is entitled Sexuality without Barriers and Love without Limits. Learning to Communicate the Beauty of Human Love.

In the afternoons, the program finishes each day with three special presentations: one by Christopher West, who is very knowledgeable in the Theology of the Body; another by Archbishop Mario Iceta of Burgos, who is a former student at the University of Navarra and a doctor in medicine and in theology, having done his thesis on bioethics. He will speak to us about “Love That is Fruitful: from Saint Paul VI to Pope Francis.” And finally, María Calvo, from the University of Carlos III. She has studied feminism in depth, a feminism that is truly feminine, and will speak about “Femininity and Happiness: Unraveling the Code.”

We have worked with great enthusiasm in organizing this symposium, and hope that it will be useful to many people. Afterwards we want to put up all the material on the website of the congress, and thus add our little grain of sand towards following the Pope’s lead and emphasizing hope.

We wish to reach gynecologists, physicians in general practice, specialists with an interest in topics related to fertility, nurses, midwives, professional medical service personnel, school teachers, chaplains, and those who impart formation to young people… and any person interested in receiving formation in sexuality centered on the good of the human person and the natural means of fertility.