"The Angel is a creature who stands before God, oriented to God with his whole being." From a homily by Benedict XVI given on September 29, 2007, feast of the three Archangels. 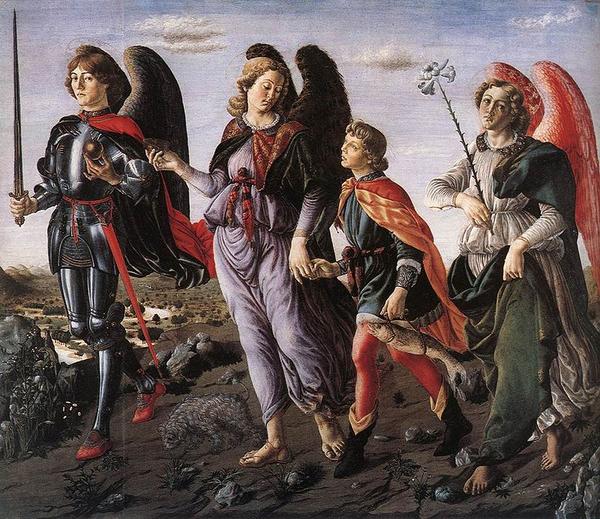 From a homily by Benedict XVI given on September 29, 2007, at the episcopal ordination of six priests:

We are celebrating the Feast of the three Archangels who are mentioned by name in Scripture: Michael, Gabriel and Raphael. But what is an Angel? Sacred Scripture and the Church's tradition enable us to discern two aspects.

On the one hand, the Angel is a creature who stands before God, oriented to God with his whole being. All three names of the Archangels end with the word "El", which means "God". God is inscribed in their names, in their nature.

Their true nature is existing in his sight and for him. In this very way the second aspect that characterizes Angels is also explained: they are God's messengers. They bring God to men, they open heaven and thus open earth. Precisely because they are with God, they can also be very close to man.

Indeed, God is closer to each one of us than we ourselves are. The Angels speak to man of what constitutes his true being, of what in his life is so often concealed and buried. They bring him back to himself, touching him on God's behalf. In this sense, we human beings must also always return to being angels to one another -- angels who turn people away from erroneous ways and direct them always, ever anew, to God.

If the ancient Church called Bishops "Angels" of their Church, she meant precisely this: Bishops themselves must be men of God, they must live oriented to God. "Multum orat pro populo" -- "Let them say many prayers for the people", the Breviary of the Church says of holy Bishops. The Bishop must be a man of prayer, one who intercedes with God for human beings. The more he does so, the more he also understands the people who are entrusted to him and can become an angel for them - a messenger of God who helps them to find their true nature by themselves, and to live the idea that God has of them.

St Michael: making a space for God in the world

All this becomes even clearer if we now look at the figures of the three Archangels whose Feast the Church is celebrating today. First of all there is Michael. We find him in Sacred Scripture above all in the Book of Daniel, in the Letter of the Apostle St Jude Thaddeus and in the Book of Revelation.

Two of this Archangel's roles become obvious in these texts. He defends the cause of God's oneness against the presumption of the dragon, the "ancient serpent", as John calls it. The serpent's continuous effort is to make men believe that God must disappear so that they themselves may become important; that God impedes our freedom and, therefore, that we must rid ourselves of him.

However, the dragon does not only accuse God. The Book of Revelation also calls it "the accuser of our brethren..., who accuses them day and night before our God" (12: 10). Those who cast God aside do not make man great but divest him of his dignity. Man then becomes a failed product of evolution. Those who accuse God also accuse man. Faith in God defends man in all his frailty and short-comings: God's brightness shines on every individual. It is the duty of the Bishop and of every christian, as a man of God, to make room in the world for God, to counter the denials of him and thus to defend man's greatness. And what more could one say and think about man than the fact that God himself was made man? Michael's other role, according to Scripture, is that of protector of the People of God (cf. Dn 10: 21; 12: 1).

Dear friends, be true "guardian angels" of the Church which will be entrusted to you! Help the People of God whom you must lead in its pilgrimage to find the joy of faith and to learn to discern the spirits: to accept good and reject evil, to remain and increasingly to become, by virtue of the hope of faith, people who love in communion with God-Love.

We meet the Archangel Gabriel especially in the precious account of the annunciation to Mary of the Incarnation of God, as Luke tells it to us (1: 26-38). Gabriel is the messenger of God's Incarnation. He knocks at Mary's door and, through him, God himself asks Mary for her "yes" to the proposal to become the Mother of the Redeemer: of giving her human flesh to the eternal Word of God, to the Son of God. The Lord knocks again and again at the door of the human heart. In the Book of Revelation he says to the "angel" of the Church of Laodicea and, through him, to the people of all times: "Behold, I stand at the door and knock; if any one hears my voice and opens the door, I will come in to him and eat with him, and he with me" (3: 20). The Lord is at the door - at the door of the world and at the door of every individual heart. He knocks to be let in: the Incarnation of God, his taking flesh, must continue until the end of time. All must be reunited in Christ in one body: the great hymns on Christ in the Letters to the Ephesians and to the Colossians tell us this. Christ knocks. Today too he needs people who, so to speak, make their own flesh available to him, give him the matter of the world and of their lives, thus serving the unification between God and the world, until the reconciliation of the universe. Dear friends, it is your task to knock at people's hearts in Christ's Name. By entering into union with Christ yourselves, you will also be able to assume Gabriel's role: to bring Christ's call to men.

St Raphael is presented to us, above all in the Book of Tobit, as the Angel to whom is entrusted the task of healing. When Jesus sends his disciples out on a mission, the task of proclaiming the Gospel is always linked with that of healing. The Good Samaritan, in accepting and healing the injured person lying by the wayside, becomes without words a witness of God's love. We are all this injured man, in need of being healed. Proclaiming the Gospel itself already means healing in itself, because man is in need of truth and love above all things.

The Book of Tobit refers to two of the Archangel Raphael's emblematic tasks of healing. He heals the disturbed communion between a man and a woman. He heals their love. He drives out the demons who over and over again exhaust and destroy their love. He purifies the atmosphere between the two and gives them the ability to accept each other for ever. In Tobit's account, this healing is recounted with legendary images.

In the New Testament, the order of marriage established in creation and threatened in many ways by sin, is healed through Christ's acceptance of it in his redeeming love. He makes marriage a sacrament: his love, put on a cross for us, is the healing power which in all forms of chaos offers the capacity for reconciliation, purifies the atmosphere and mends the wounds. The priest is entrusted with the task of leading men and women ever anew to the reconciling power of Christ's love. He must be the healing "angel" who helps them to anchor their love to the sacrament and to live it with an ever renewed commitment based upon it.

Secondly, the Book of Tobit speaks of the healing of sightless eyes. We all know how threatened we are today by blindness to God. How great is the danger that with all we know of material things and can do with them, we become blind to God's light. Healing this blindness through the message of faith and the witness of love is Raphael's service, entrusted day after day to the priest and in a special way to the Bishop. Thus, we are prompted spontaneously also to think of the Sacrament of Reconciliation, the Sacrament of Penance which in the deepest sense of the word is a sacrament of healing. The real wound in the soul, in fact, the reason for all our other injuries, is sin. And only if forgiveness exists, by virtue of God's power, by virtue of Christ's love, can we be healed, can we be redeemed.

"Abide in my love", the Lord says to us today in the Gospel (Jn 15: 9). At the moment of your Episcopal Ordination he says so particularly to you, dear friends. Abide in his love! Abide in that friendship with him, full of love, which he is giving you anew at this moment! Then your lives will bear fruit, fruit that abides (cf. Jn 15: 16). Let us all pray for you at this time, dear Brothers, so that this may be granted to you. Amen.