Venerable Isidoro, high school classmate of St Josemaria, died on July 15, 1943 with a reputation of holiness. On this anniversary, here are 3 recent favors sent in attributed to his intercession. 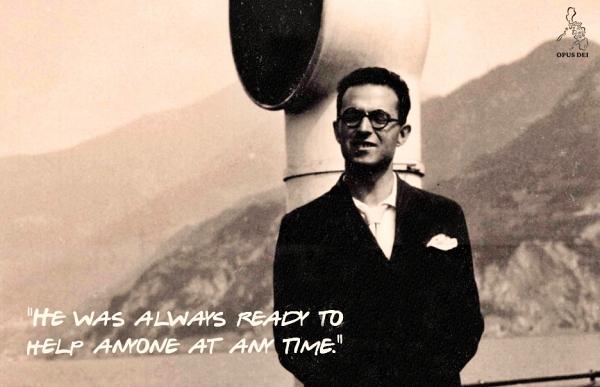 
Isidoro Zorzano helped me arrive at my new city

Due to the Covid-19 restrictions, it had not been easy to plan my trip to Davao City, where I was re-assigned. Flights were cancelled. I remembered that Isidoro knew when Blessed Alvaro and his companions would arrive at the safer side of Spain during the Spanish Civil War. Maybe he would also know the right time for me to go. I started praying to him for this.

When the flights resumed, I picked a date: September 23. It was the earliest that was available for me. Aside from the plane ticket, there were other requirements. I needed a permit from the police. To get this, I had to obtain permits from the Local Government Unit and from the Local Health Unit. There were hundreds of people in line at the City Hall trying to secure these permits. Someone informed me then that I could get them from another source, which I managed. I finally got the permit from the police, which was valid until September 24. If I did not leave by that day I would have to apply again.

A few days before the flight, I learned that the city government of my destination was requiring a swab test 48 to 72 hours before the flight. I went to the testing center, waited for the result, and it came at 4:00 am of the flight date (negative for Covid). Flights to Davao were cancelled on the two days prior to my flight; there was a possibility that mine could be cancelled too. As things went, there was no cancellation on that day and everything went as scheduled. Upon arrival in Davao, a 14-day quarantine is obligatory as well as another negative swab test result. I am now on my 6th day.

I am grateful to Isidoro for fixing everything related to my trip. I entrust to him those who are having difficulties in travelling during these times and the apostolic work of Opus Dei in this city.

I promised Venerable Isidoro Zorzano that I would write this account if he would help me with my request.

I am a fresh graduate of Bachelor of Science in Industrial Engineering. Graduating during a pandemic, it is very difficult for most of my batchmates to find suitable employment. The economy was in recession, with increasing unemployment. 6 months after applying to different companies, I still didn’t have a full-time job. My parents' income was severely affected by the pandemic and our family savings were being depleted as the months passed.

My parents were living in the province during the lockdown. I was staying in a dormitory across the university. To be of help - albeit in a little way - I told them that I would support myself financially by looking for part-time jobs. Thanks be to God, I found a part-time job that enabled me to stay in the dorm and allowed me to look for job opportunities. The income from my part-time jobs was not enough though and my payables were increasing every month.

I had been praying the prayer card of Isidoro daily for months now, together with St. Josemaria’s Novena for Work. My job hunting was progressing. I was contacted and interviewed by several companies and I had passed various assessments. But there was no employment imminent. Then, I was told that the multinational company where I did my internship had three positions open and needed personnel urgently. This company freezed its hiring temporarily. Thus, when they re-opened, hundreds of applicants applied for the said positions. Yet, thanks be to God and his unfathomable providence, I was referred to the hiring managers and got an interview right away.

The day of the interview came and I could say that it went well. However, a week passed and I did not get any feedback or message from the company.

On September 2, I asked specifically Isidoro to land me the job the following day, when I planned to follow up the company. In exchange, I would write to the Office for the Causes of Saints, do a pilgrimage, and talk to my friends about attending a virtues talk. Late morning of the next day, I sent my follow up email to the company..

It was 6:00 pm and there was no reply. I was thinking that perhaps the job wasn’t really for me. I carried on with my activities and then I received a call from the company. They told me that they got positive feedback regarding my interview and asked me to wait another day. Lo and behold, I was given the job the next day!

I know it was Isidoro. Would the company call me after office hours on the day that I specified to Isidoro, just to tell me that they got positive feedback? It felt very supernatural. And they gave me not just a decent full-time job but a high-paying one, considering the current status of entry-level work. I am convinced that it was a favor granted through Isidoro’s intercession. Words cannot express the indescribable supernatural joy that it brought me. It further strengthens in me the certainty that our brothers and sisters who are already in their heavenly home are watching over us closely.

Isidoro got us our internet connections

Due to the community quarantine brought about by the pandemic, we were forced to organize our retreats and seminar activities online. We needed better internet connectivity to transmit the meditations, talks, and other activities. We applied for higher connection with two internet service providers in the Philippines, but several months passed and nothing happened.