​Not your usual May pilgrimage: Prayer, history, and culture

5 young fellows from the Philippines discovered a "unique and historic" way of doing the May pilgrimage, visiting Marian Shrines around the world online. 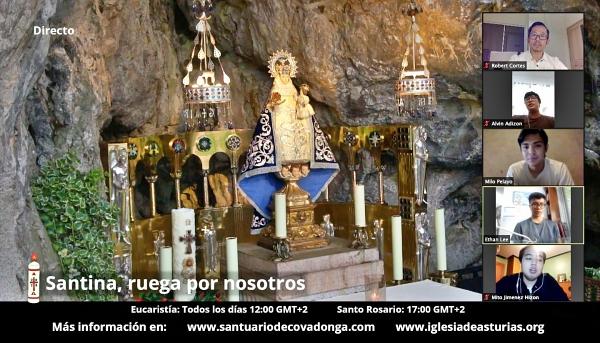 Shrine of Our Lady of Covadonga (Spain)

Those of us who learned from St. Josemaria the custom of visiting a Marian shrine in the month of May try to follow his usual practice of reciting three rosaries – one on the way to the shrine, another at the shrine itself, and the last one upon leaving the shrine – preferably with a small group of family and/or friends. The community quarantine during these days, however, has made this May anything but “usual.” Did it suggest giving up the May pilgrimages?


Not at all – at least not to us. After all, if schoolwork and office meetings could be done online from home, could we not do the pilgrimage using virtual meeting platforms as well? However, it did mean making some creative modifications to the decades old practice we’ve gotten used to and loved. Praying three rosaries is all right if one is moving around. But, in virtual pilgrimages everyone is practically rooted in the same spot. Praying all three rosaries in one go may be demanding too much.

My friends and I worked around this problem by agreeing to spread the pilgrimage to three days: one rosary for each day. To highlight the idea of being pilgrims, we decided to visit – virtually – one major shrine of Our Lady for each mystery. We agreed to meet online at the same time each day, at 2 p.m. (Manila time), since by then it was daytime in the places where all the shrines, except two, were located. Since there were five of us, to maximize individual participation, we agreed to take turns in leading the prayers for each decade.

Providentially, our three-day pilgrimage coincided with three successive special days. Our first day was May 12, the feast day of Blessed Álvaro. It was just as well that we thought of using the links provided in the Opus Dei website that featured live access to Marian shrines visited by St. Josemaria and Blessed Álvaro around the world. Having learned this devotion from the Founder of Opus Dei, it was only logical to follow “the way of St. Josemaria” for this unique and historic form of pilgrimage. 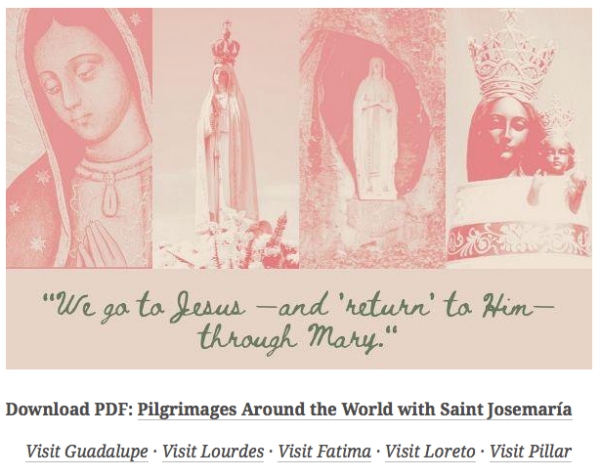 In more or less real time, the internet links brought us up close to the tilma of Our Lady of Guadalupe, the grotto in Lourdes, the Holy House of Loreto, the shrine of Our Lady of Fatima, and the small statue of Our Lady atop the famous pillar in Zaragoza. Before reciting each mystery, I gave a brief background of each shrine to my friends based on the articles in the links.

Even on the first day of the pilgrimage all of us were already interiorly moved, and the experience helped all of us in more ways than one. Milo, one of the fellows who joined, said that this pilgrimage felt “like a reset button.” Ethan articulated what most of us who had never visited these places were thinking. “It was really refreshing,” he said, “to not just see these shrines, but to pray in their presence, though only virtually.”

My friends’ positive feedback motivated me to do research to see if there were other shrines with live feeds that we could visit. This way not only would we get to know about shrines in other parts of the world but, I hoped, also deepen our devotion to Our Lady along the way. I was not disappointed.

We called the plan for our second day, “the way of the Popes.” May 13 was the feast of Our Lady of Fatima whose shrine was visited by at least four of the last five popes, from Paul VI to Francis. Logically, our first stop was there. We chose the remaining four shrines on the basis of their special connection with individual popes. Our next stop was the Sanctuary of Our Lady of Luján in Argentina, a shrine most intimately connected with Pope Francis. Then we went to the beautiful Shrine of Our Lady of Altötting in Bavaria (Germany), the region where Pope Benedict grew up. 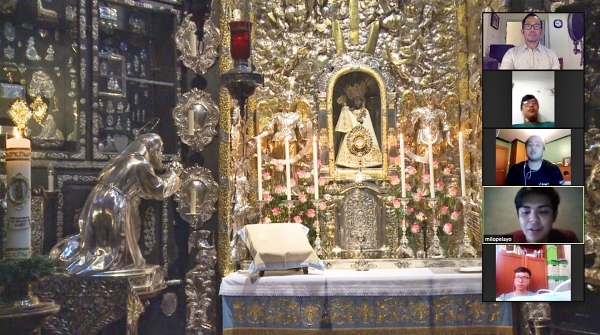 Afterwards, we visited a shrine which Pope John Paull II surely frequented in his youth, the Shrine of Our Lady of Calvary in Kalwaria Zebrzydowska (Poland). We prayed the last mystery contemplating the Grotto of the Annunciation in Nazareth. It was Pope Paul VI whom we identified with this shrine being the first pope ever to visit the Holy Land, in 1964.

On the third and last day of our pilgrimage, the feast of St. Matthias, we visited even more “exotic” shrines. While Spaniards would be familiar with these places, most in our group had never heard of the Abbey of Montserrat in Barcelona and the Holy Cave of Covadonga in Asturias (both in Spain). Even more unfamiliar were the Shrine of Our Lady of Knock in Ireland, and the Shrine of Our Lady of Caravaggio (Santa Maria del Fonte) near Milan. Of course, we were only too glad to make their acquaintance.

Yet unlike most acquaintances, these left a profound effect. Mito, for one, singled out the Knock Shrine – site of apparitions not only of Our Lady but also of St. Joseph, St. John the Baptist and St. John the Evangelist – as having “filled me with awe knowing that I was praying before such a holy site.” More importantly, we realized that this virtual pilgrimage-adventure was an occasion to learn and appreciate the extent of Our Lady’s intervention in the world throughout history. 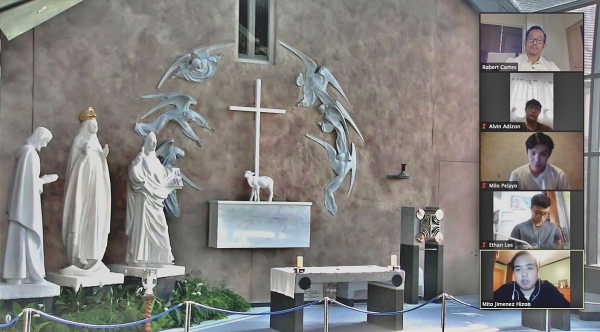 Learning about these “exotic” places brought with it too a bit of amusement. Specifically, our research on the history of Covadonga’s Holy Cave told us that a Visigoth King, whose name was Pelayo, retreated there from attacking Muslims with his band of men and were saved. As it happened, one of us was surnamed Pelayo; so to humor ourselves, we asked him to lead the mystery as we contemplated the beautiful image of Our Lady of Covadonga.

On visiting the Caravaggio shrine in Milan, we remembered the victims of the coronavirus all over the world and Pope Francis’s request on that day to pray for the pandemic to end soon. Having run out of “exotic” shrines, to round out our five for the day, we made our way back to Lourdes.

When we finished our pilgrimage, we spent some time looking back at our experience of visiting thirteen Marian shrines in the course of three days. We laughed at the apparent absurdity of expending so much effort to go through what we did; even more, at how crazy the idea was to begin with. However, we also agreed that we wouldn’t have had it any other way. After all, people in love are often called “crazy.” Referring to the virtual pilgrimage, our Pelayo– Milo, not the Visigoth King – said most eloquently, “I think it only shows our persistence and devotion as Catholics, even using digital means to go on pilgrimage… But these times call for us to live differently, ‘delivering’ on our faith even when it is difficult.” 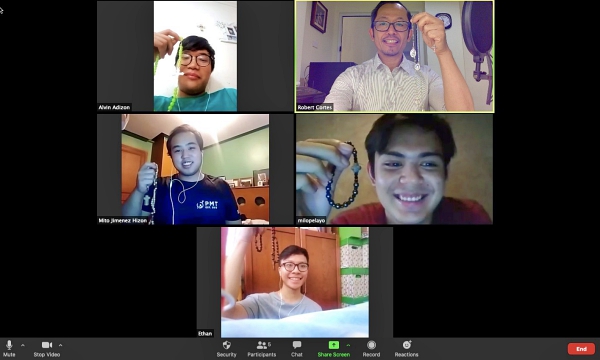 In truth, we didn’t feel that it was anything especially difficult. After all, we gained much more than what we invested in this “unique and historic” spiritual exercise. One such gain would be profound spiritual realizations such as Alvin’s: “The virtual pilgrimage was a reminder for me that the fervor of our prayer should not depend on context.” But it was Mito who summarized the extra benefits more pithily and to-the-point: “Pilgrimage na, history lesson pa!” (Not just a pilgrimage; a history lesson as well!)