In his Wednesday October 24 general audience, Pope Francis spoke about the Sixth Commandment and the requirement of fidelity. 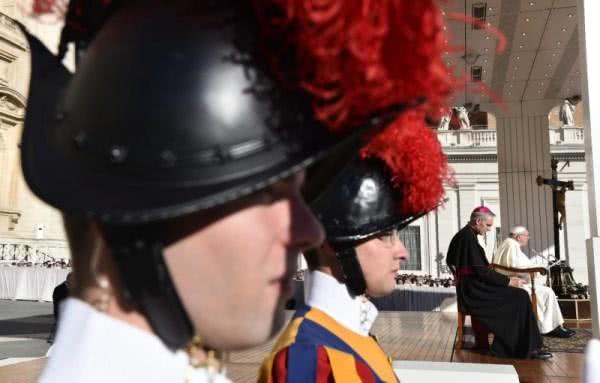 In our itinerary of catechesis on the Commandments, today we arrive at the Sixth Word, which relates to the emotional and sexual dimension, and states: “Do not commit adultery.”

The immediate demand is that of fidelity, and in effect no human relationship is authentic without fidelity and loyalty.

One can not love only as long as “it is convenient”; love manifests itself beyond the threshold of one’s own advantage, when everything is given without reserve. As the Catechism states: “Love seeks to be definitive; it cannot be an arrangement ‘until further notice’” (1646). Fidelity is the characteristic of a free, mature, responsible human relationship. Even a friend proves himself authentic because he remains such in all circumstances, otherwise he is not a friend. Christ reveals true love, He who lives of the boundless love of the Father, and by virtue of this He is the faithful Friend who welcomes us even when we make mistakes and always wants what is good for us, even when we do not deserve it.

The human being needs to be loved unconditionally, and those who do not receive this acceptance carry within them a certain incompleteness, often without knowing it. The human heart tries to fill this void with surrogates, accepting compromises and mediocrity that have only a vague flavour of love. The risk is calling unripe and immature relationships “love,” with the illusion of finding the light of life in something that is at best only a reflection of it.

In this way we overestimate, for example, physical attraction, which is in itself a gift of God but is intended to prepare the way for an authentic and faithful relationship with the person. As Saint John Paul II said, the human being is “called to the full and mature spontaneity of relations” which is “the gradual fruit of discernment of the impulses of one’s heart.” It is something that is conquered, from the moment that every human being “must with perseverance and consistency learn the meaning of the body” (cf. Catechesis, 12 November 1980).

The call to married life requires, therefore, an accurate discernment of the quality of the relationship and a time of engagement to verify it. To enter the Sacrament of Marriage, the engaged couple must ripen the certainty that in their bond there is the hand of God, Who precedes them and accompanies them, and will allow them to say: “With the grace of Christ I promise to always be faithful to you.” They can not promise fidelity “in joy and pain, in sickness and in health,” and to love and honour each other every day of their lives, only on the basis of good will or hope that “the thing works.” They need to build on the solid ground of God’s faithful love. And for this, before receiving the Sacrament of Matrimony, we need careful preparation, I would say a catechumenate, because we stake our whole life in love, and one does not joke with love. Three or four meetings in the parish can not be defined as a “preparation for marriage”; no, this is not preparation: this is a false preparation. And the responsibility of those who do this falls on him, on the parish priest, on the bishop who allows these things. The preparation must be mature and it takes time. It is not a formal act: it is a Sacrament. But one must prepare with a true catechumenate.

Fidelity is indeed a way of being, a style of life. One works with loyalty, one speaks with sincerity, one remains faithful to the truth in one’s own thoughts, in one’s own actions. A life woven in fidelity is expressed in all dimensions and leads us to be men and women who are faithful and trustworthy in every circumstance.

But to arrive at having such as beautiful life, our human nature is not enough; it is necessary for God’s faithfulness to enter into our existence, to spread to us. This Sixth Word calls us to turn our gaze to Christ, Who with His fidelity can take from us our adulterous heart and give us a faithful heart. In Him, and only in Him, is there love without reserve or changes of mind, complete giving without parentheses and the tenacity of full acceptance.

Our fidelity derives from His death and resurrection; constancy in relations derives from His unconditional love. From communion with Him, with the Father and with the Holy Spirit, derives communion among us and the ability to experience the bonds between us in fidelity.