On May 27, 1964, Opus Dei started stable apostolic work in the Philippines. Dr Bernardo Villegas reflects here on the early years. 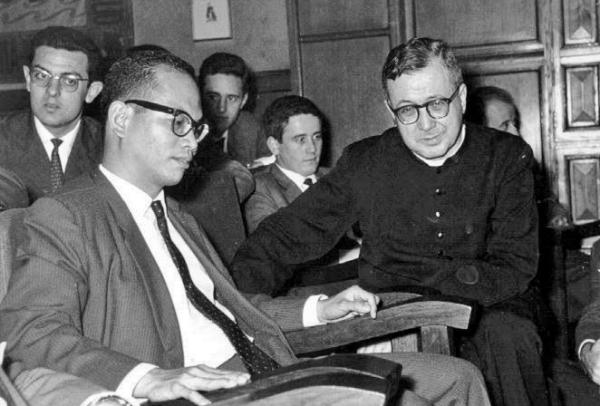 It did not really matter if those of us who started Opus Dei in the Philippines in 1964 (less than a dozen) had very limited economic means. It was enough for us to be equipped with the teachings of St. Josemaria (and his very powerful prayers which he had started to offer for the Philippines as early as the 1930s). We only had to repeat again and again to our relatives, friends, and work colleagues that cry of the Founder of Opus Dei: “No! We cannot lead a double life. We cannot be like schizophrenics, if we want to be Christians. There is just one life, made of flesh and spirit. And it is this life which has to become, in both soul and body, holy and filled with God. We discover the invisible God in the most visible and material things.”

St. Josemaria assured us that if we used the human and supernatural means he taught us, we can dream of spreading this marvelous doctrine of the universal calling to sanctity throughout the Philippine Archipelago and all over the Asian region. True enough, over these last 60 years since those Harvard days, numerous families and individuals in key cities of the Philippines and Singapore, Taiwan, Malaysia, Hong Kong, Indonesia, Macau, and China have started to live the spirit of Opus Dei as a result of the personal apostolate of friendship and confidence begun by the handful of the faithful of the Prelature of Opus Dei, first at Harvard and then in Manila in May of 1964. The prophetic words of St. Josemaria are still ringing in my ears: “Dream and your dreams will fall short of reality.”

Another dream St. Josemaria encouraged me to have was about the vast apostolate with married people. I obtained my Ph.D. in economics from Harvard in June, 1963. Before returning to the Philippines, I was advised by St. Josemaria to spend a few months in Spain where the apostolic activities of Opus Dei had been most developed, especially to learn about the work with married couples. If one is to attain holiness through the ordinary circumstances of everyday life, the vast majority of human beings would have to find sanctity in marriage and family life since most of them are married. Since I lived in a student residence in Harvard, most of the activities I was exposed to were for young unmarried people. 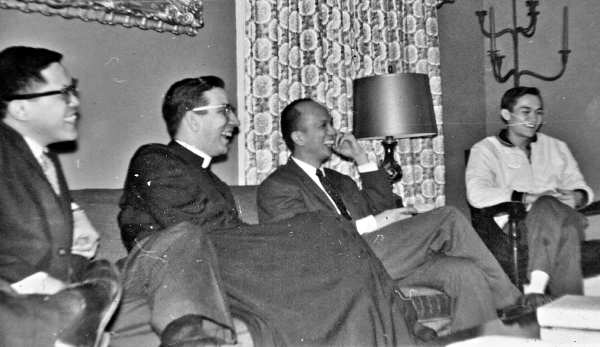 Among Spanish cities, the work with married people was highly developed then in Barcelona, the leading industrial center of Spain. It was the venue of a business school started by some members and cooperators of Opus Dei in 1958 called the IESE Business School which has since become one of the top business schools in the world today, having been ranked by the Financial Times as Number One in Executive Education for four consecutive years.

To cover my board and lodging in Barcelona, I worked as a research assistant to some of the business professors who were writing business cases for the fledgling MBA program at that time. Since I saw IESE in its gestation period, I can say that this leading business school (that has some 30 alumni in the Philippines) is another case of a dream having fallen short of reality. I could not imagine then in 1963 that one day IESE would be Number One in executive education in the world, even besting my own alma mater, Harvard University.

My main purpose in Barcelona, however, was to see for myself how the spirituality of Opus Dei helped married people attain sanctity through fulfilling the obligations of their family life. Indeed, in my interaction with the married people who were in touch with the apostolic activities of Opus Dei in Barcelona then, I saw outstanding examples of individuals exerting every human and supernatural effort to attain sanctity by fulfilling their ordinary obligations as married couples and parents. They took very seriously the admonition of St. Josemaria to “sanctify family life, while creating at the same time a true family atmosphere.” 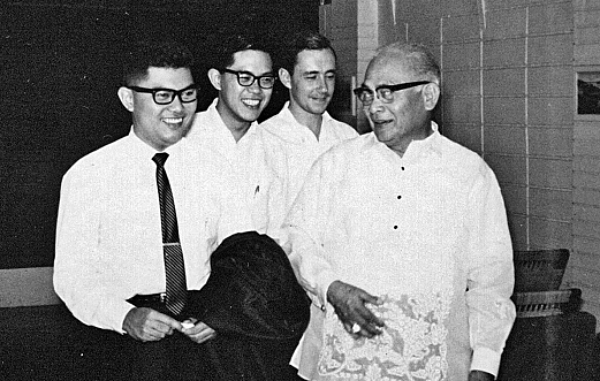 Here, I must mention the important role played by the first Filipino married member of Opus Dei, the late Placido Mapa, Jr., who also joined Opus Dei while obtaining his PhD in economics at Harvard. Upon his return to the Philippines, Placido (whose nickname was Cidito), became instrumental in leading other married couples in touch with the apostolate of Opus Dei to start certain initiatives that put into practice the teachings of St. Josemaria about the sanctification of married life. He and his wife Chona were exemplary in their generosity of having a large family. They had nine children whom they brought up within the warmth of a truly Christian home, a bright and cheerful one.

To translate into action the dictum that parents are the first educators of their children, Cidito mobilized other parents to establish schools in which the parents are the first in importance, followed by the teachers, and only in the third place as a practical consequence the students themselves. Learning from equivalent institutions in Spain, they put up the Parents for Education Foundation (PAREF) which in the last 45 years have put up schools like Southridge, Woodrose, Northfield, and Rosehill in the Metro Manila area; Southcrest and Springdale in Metro Cebu; Westbridge in Iloilo; and a few other affiliated schools.

As a bystander, I have witnessed how the married members of Opus Dei, both men and women, have tirelessly helped numerous married couples, whether or not in touch with Opus Dei, to fulfil their most important obligation in their lives which is the proper upbringing of their children. These efforts resulted in the establishment of a foundation called Educhild which has spread its activities outside the borders of the Philippines in a number of Southeast Asian countries.

Educhild tries to put into practice these words of St. Josemaria: “The parents are the first persons responsible for the education of their children, in human as well as in spiritual matters. They should be conscious of the extent of their responsibility. To fulfil it, they need prudence, understanding, a capacity to love, and a concern of giving good example. Imposing things by force, in an authoritarian manner, is not the right way to teach. The ideal attitude of parents lies more in becoming their children’s friends—friends who will be willing to share their anxieties, who will listen to their problems, who will help them in an effective and agreeable way.”

Over the last forty years, thousands of parents all over the Philippines and Southeast Asia have become better parents, thanks to the selfless efforts of married members of Opus Dei and their friends. Again, the dream I had during that academic year 1963 to 1964 in Barcelona, Spain, has fallen short of reality. That was, however, not the end of dreaming.

My short stay in Barcelona exposed me to actual examples of a training center for industrial workers, high schools, a business school, and student residences like the one in which I stayed at Harvard. After observing what then were the needs of Philippine society which the few of us who were starting the apostolate of Opus Dei could address, we decided to start the nucleus of a university that would be strong in research, something which in the mid-1960s was still rare. 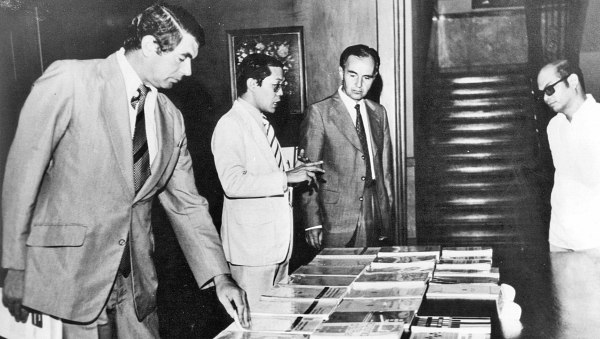 Fortunately, Jess Estanislao, who also joined Opus Dei while pursuing his doctoral studies in economics at Harvard, was steeped in research experience, having been a disciple of the Nobel laureate in economics Simon Kuznets, father of national income accounting. Upon his return to the Philippines also in 1964, he started to work for the Program Implementation Agency (PIA) which evolved into the Presidential Economic Staff (PES) under the Marcos administration.

Together with me and a few other economists, Jess started what was called the Center for Research and Communication (CRC) literally in a garage lent to us by the late Ambassador Jose Romero Jr. in his office of the Philippine Coconut Authority. CRC was formally incorporated in 1967 and by August 15, 1968, moved to a residential building converted into an office on Jorge Bocobo St., Malate.

In the next 20 years or so, CRC grew to be the leading business economic think tank serving the needs of hundreds of business enterprises, both national and multinational, for data needed for industry analysis, strategic planning, project planning and operational planning. The CRC brand became synonymous with economic forecasting for the private business sector and policy advice to the government, especially needed by the people in business during those tumultuous years of martial law. 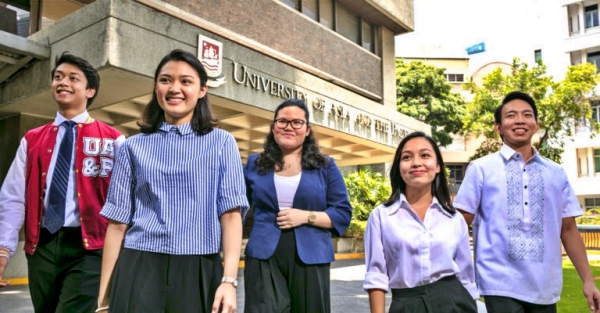 We never lost sight of the request of St. Josemaria that CRC would eventually transform itself into a university that can turn out quality professionals who would be of service to Philippine society in such fields as education, journalism, business, public administration, engineering, information technology, law and other fields of studies. By 1981, we moved to a much bigger and permanent site in the Ortigas area, thanks to a generous donation of land from the Ortigas family. In 1989, we started the CRC College of Arts and Sciences. By 1995, the Commission on Higher Education (CHED) gave us the authorization to operate as an institution of higher learning which we called the University of Asia and the Pacific.