To celebrate his feast day, May 12, we are sharing some stories of recent favors received through the intercession of Blessed Alvaro. 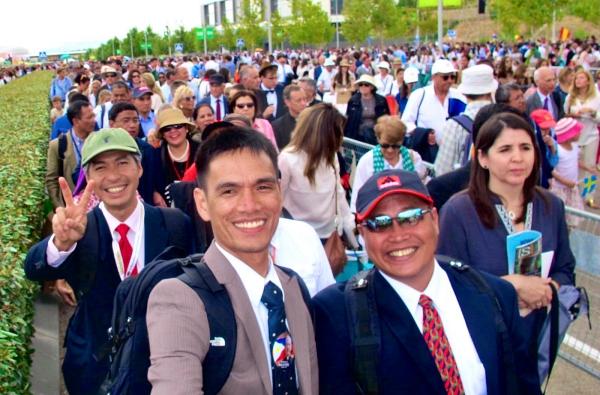 Filipinos at the Beatification ceremonies in Madrid in September 2014.

Blessed Alvaro del Portillo was beatified on September 27, 2014 in Madrid, the city of his birth. His feast day in the Church is celebrated on May 12.

The Office for the Causes of the Saints of Opus Dei in the Philippines continues to receive reports of favors attributed to his intercession. Here are some accounts of favors received in 2020.

Blessed Alvaro was in the Philippines in January 1987. 2,000 Filipinos attended the ceremonies in Madrid in 2014.

Blessed Alvaro found the ideal tenants for me

When my mom passed away, my daughter and I decided to move to a smaller place and have my house rented. After one year, the tenant terminated the contract and left my house in a state of disrepair. I had to have it renovated for it to look habitable again. The process took longer than expected and the quest for a suitable tenant proved to be even more challenging.

Being a single mother, I relied on the additional income from the rental of my house. After several months of no prospects, I started to get anxious. At that time, a friend suggested that I pray to Blessed Alvaro for my concern. I knew about Blessed Alvaro, but actually never prayed for his intercession. That night, I decided I would pray to him every day; and the request would be specific. I asked him to help me find a tenant before the month ended. It was just about a week before the end of February. Around the 4th or 5th day, my broker sent me a text message with a solid offer. The prospect wanted to close the deal as soon as possible because he and his wife were being asked by their landlord to move out of their place.

I always dreamt about having as the ideal tenant, an old couple who would take care of my house. To my surprise, when I met with the prospect, they were a retired couple. As an added bonus, Blessed Alvaro gave us not just any ordinary couple. They were God-fearing people. They were active members of a Catholic community and would often host prayer meetings. The contract was signed one day before the end of February, true to my prayer request.

In March, COVID-19 struck. Offices were on lockdown. My company asked its employees to go on an indefinite period of unpaid leaves. The timing of closing the deal with my new tenant could not have been better. Blessed Alvaro provided me the monthly rental income needed for me to cope with this overwhelming crisis.

I will forever be grateful to Blessed Alvaro for going over and beyond what I deserve. I now pray to him every day and find comfort just by looking at his smiling face on the photo of his prayer card.

Blessed Alvaro got me financial support for an international conference

I was accepted to participate in an international conference in Seoul, South Korea. But as a graduate student and still dependent on my parents, I had no recourse but to solicit funds to be able to attend the conference. I was given some money by a local government official and my godmother, which covered half the conference fee. I approached many other persons and institutions but most of them sent me away empty-handed. I was losing hope as the deadline for payment was drawing near.

A friend who introduced me to Opus Dei suggested that I pray to Blessed Alvaro. He said that Blessed Alvaro is a “go-to-fellow” when it comes to financial matters. I cannot recall how many times I prayed to him, but just a few days later, the vice-dean of our university gave me the amount to complete my payment for the conference. Blessed Alvaro did it!

I was about to lose hope. But truly, if we are childlike enough to be shameless and honest children who ask for what they need, our elder brothers and sisters—even our Mother! —in the “higher place” will not forsake us. How beautiful and wonderful is our great family!

Blessed Alvaro helped me save the school

A court case was unjustly filed against me and some who work with me. I am the president of a school in my province. I was greatly troubled and sought out a friend who advised me, "Why don’t you ask Blessed Alvaro for help?" I started praying to him and, slowly, the cases were dismissed one by one. All cases were dismissed before the Covid-19 lockdown. I'm really thankful to Blessed Alvaro for helping me.

School campuses were closed during the pandemic. I asked Blessed Alvaro for help since I did not know where to get the funds to sustain the school. This college is the legacy of my parents and grandparents to help people in the province receive higher education. As vice-president and treasurer, I made sure that the school fulfilled its mission.

And, yes, Blessed Alvaro helped me save the school. In spite of the strong typhoons that hit our province and our need to adapt to online teaching, I was able to get funding from the government for the senior and junior high school, and for the college. I am happy that before the year ended I was able to pay all school dues and pay the employees their salaries, bonuses, and incentives.

Thank you very much for everything, Blessed Alvaro! I will continue praying for your canonization.

My four-year-and-11-month-old daughter started vomiting and having fever in the evening of March 21 and it continued until late afternoon the following day despite being given medicine for stomach flu as prescribed by the pediatrician. My wife was in touch with several doctors making consultations by phone. Our worst nightmare came at 8pm when the doctors said that we needed to bring my daughter to the hospital to avoid dehydration.

Bringing her to the hospital would have been easy if we were in a normal situation. We were in the 2nd week of total city lockdown due to Covid-19. Hospitals were full of Covid patients and the probability of my daughter getting infected was high. Her immune system was so weak. Moreover, our car was in the repair shop and public transportation was suspended.

I told my wife to wait a little longer before bringing our daughter to the hospital. What my wife didn't know was that while attending Holy Mass online, I was inspired to pray to Blessed Alvaro just before the priest’s final blessing. I did not have the prayer card with me and I searched for it hurriedly to pray to Blessed Alvaro telling him that I was leaving it all in his hands, after which I felt much calm. The vomiting of my daughter ceased exactly when the Mass ended and she started taking in fluids. The next day she started eating a lot and was back playing.

It was a pleasant birthday gift for my daughter who turned 5 years old on March 23, the anniversary of Blessed Alvaro's going to heaven.

"Another virus during the pandemic!"

My Internet browser got infected by a virus from a program that I downloaded. The virus did not allow me to add an application that I needed badly for online teaching, essential for teachers during the present pandemic. I am not technically savvy and know only the basic way to uninstall programs. But the virus could not be removed that way. I searched the Internet for a solution but most of them recommended purchasing programs to get rid of malware. After some more searching, I found a video in YouTube detailing the steps on how to get rid of the virus.

There were many unfamiliar steps involved, some of which I could not perform because the author’s infected browser was different from mine. However, I tried as best I could. After following the procedures, I restarted the computer. Before opening the browser, I prayed a novena to Blessed Alvaro whom I knew was good in technical matters. When the browser started, it was free from the virus!