At the heart is woman

February 14 is hearts and flowers and sugary greeting cards day once again. This year, though, a number of other celebrations coincide with this holiday.

This article is not intended to describe Opus Dei (which I do not consider myself capable of). What I wish to take note of is the founding of the Women’s Branch of Opus Dei on Feb. 14, 1930 (I shall not discuss the other anniversary) -- a date which was long before the term "women’s liberation" (first used in the US in 1964) was invented. Originally, as I know it, the founder of Opus Dei, Josemaría Escrivá, had envisioned the Work as a movement for men in the secular world, and how they could respond to the call for holiness in their spheres of work. In 1930, however, he received the inspiration that the universality of Opus Dei must be reflected not only by embracing people in every sort of profession, but also by including women in its apostolic work, albeit done separately, in recognition of their different pastoral needs.

Next month, March, has for some time been declared Women’s Month. I shall jump the gun ahead of others who would be writing about topics related to women, and feminism as it is foisted upon women these days, and write about what being a woman means to me, and relatedly, how womanhood is uplifted by the words of St. Josemaría and the late beloved Pope John Paul II.

What I found interesting is the way woman is understood by both of them, and how they say that woman is not a "lesser man" as feminists imply when they want to imitate men and "fulfill" themselves only if they become "copies" of the other sex, or as they prefer to say, gender. I found this quote in an article: "Feminists have charged that Judaism and Christianity are sexist religions with a male God and traditions of male leadership that legitimate the superiority of men in family and society." I guess this is the whole object of "sexism" which some say should be abolished, thereby allowing women to be "themselves." 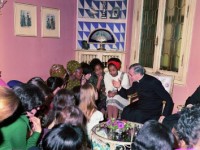 Let me share what I agree is the role of woman. It is "defined by two factors: her identity and her self determination. A woman, just like a man, has to be able to choose her own future, to pursue her own life project. To do this she must have the same opportunities as a man. And she will do this by reason of her own identity, being who she is without falling into the temptation of mimicry, without imitating the customs and manners of men, thinking that in this way she will find herself." (Patricia Mayorga, in El Mercurio, Santiago, 1996)

In a sense, Josemaría Escrivá’s ideas arrived many decades ahead of time. It was this foresight that enabled Centers of Opus Dei directed by women to be opened, because at the time hardly anyone believed that a woman could survive independently, without the help of a male partner, at least in what referred to the economic sphere and authority. It was foresight to encourage them from the beginning to develop activities with a wide range of apostolic activities in all fields and professions. He said to them, "You have all the conditions to be independent: in your own sphere of influence, since I have always been of the opinion that you should be autonomous, in your economic and corporate activities." Surely, these were revolutionary ideas, at that time, and even today.

Beloved Holy Father John Paul II also defended the rights of woman, praised their unique quality as helper and partner of man, and not as one inferior to him. He preached a new feminism that redefines the vocation and mission of woman, calling it the "genius of woman." He shows that she is gifted with a special sense for the concrete person, that she looks at persons with her heart, seeing persons independently of political or ideological systems. Sadly, our world today is so dominated by hedonism and a consumeristic culture that it is in danger of being depersonalized. The Holy Father felt that it needs the "genius of woman" to save and protect it from this threat.

So much rhetoric has been poured on the concern for "freeing" women from the so-called male-dominated socio-political and socio-cultural shackles, when, in fact, what is needed is to harness this "feminine genius" in all sectors of society -- whether they are running schools, active in businesses, working in the fields, working as politicians, journalists and artists, or working exclusively in work at the home. At the heart of progress in the community, society, and the nation, it has to be recognized that women play a key role -- as themselves, and not as poor imitations of the male.

The anniversary of the founding of the Women’s Center 80 years ago is a telling reminder that the Church has always considered woman as an equal of man. Each woman, in her own sphere of life, if she is faithful to her divine and human vocation, can achieve the fullness of her feminine personality, and indeed, "hold up half the sky" as an old saying goes.