"Seek the Truth in Charity"

The Holy Father continued his catechesis on the Acts of the Apostles, focusing this time on the passage: “God opened a door of faith to the Gentiles” (cf. Acts 14: 27). 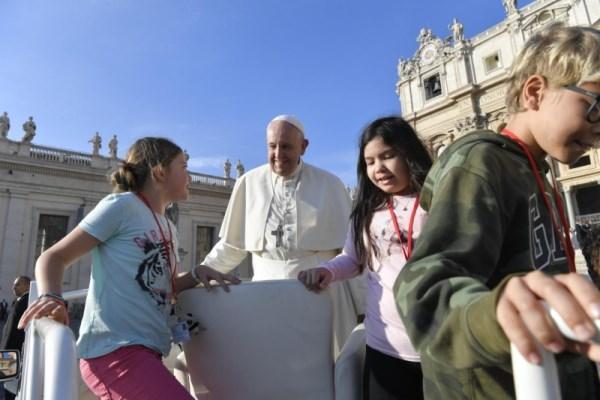 Paul and Barnabas arrive first in Antioch of Syria, where they remain for an entire year to teach and help the community to lay down roots (cf. Acts 11: 26). They proclaimed to the Jewish community, to the Jews. Antioch thus becomes the centre of missionary propulsion, thanks to the preaching with which the two evangelizers – Paul and Barnabas – move the hearts of believers, who are for the first time called “Christians” here (cf. Acts 11: 26).

The nature of the Church emerges from the Book of the Acts; she is not a stronghold, but a tent capable of extending her space (cf. Is 54: 2), and of allowing access to all. The Church is either “outbound” or she is not a Church; she is on the move, always broadening her space so that all may enter, or she is not a Church. “A Church with open doors” (Apostolic Exhortation Evangelii gaudium, 46), always with the doors open. When I see a little church here, in this city, or when I saw them in the other diocese where I am from, with the doors closed, this is a bad sign. Churches must always have their doors open, because this is the symbol of what a Church is: always open. The Church is “called to be the house of the Father, with the doors always wide open … so that if someone, moved by the Spirit, comes there looking for God, he or she will not find a closed door” ( ibid, 47).

But this novelty of the doors open to whom? To the Gentiles, because the Apostles preaches to the Jews, but also the Gentiles came to knock on the door of the Church; and this novelty of the doors open to the Gentiles unleashes a very lively controversy. Some Jews affirm the need to become Jews through circumcision in order to be saved, and then to receive baptism. They say: “Unless you are circumcised according to the custom of Moses, you cannot be saved” ( Acts 15: 1), that is, you cannot then receive baptism. First the Jewish rite, then baptism: this was their position. And to resolve the matter, Paul and Barnabas consult the council of the Apostles and elders in Jerusalem, and what is considered the first council in the history of the Church, the council or assembly of Jerusalem, to which Paul refers in the Letter to the Galatians (2,1-10), takes place.

A very delicate theological, spiritual and disciplinary issue is faced: the relationship between faith in Christ and observance of Moses’ Law. Decisive in the course of the assembly are the speeches of Peter and James, “pillars” of the Mother-Church (cf. Acts 15: 7-21; Gal 2: 9). They suggest not to impose circumcision on the Gentiles, but to ask them only to reject idolatry and all its expressions. From the discussion a common way emerges, and this decision is ratified by the so-called apostolic letter sent to Antioch.

The assembly of Jerusalem offers us an important light on the ways in which divergences can be faced, and to seek the “truth in charity” ( Eph 4: 15). It reminds us that the ecclesial method for the resolution of conflicts is based on dialogue made up of attentive and patient listening and on discernment carried out in the light of the Spirit. Indeed, it is the Spirit that helps to overcome closure and tensions, and works in hearts so that they may reach, in truth and goodness, that they may reach unity. This text helps us understand synodality. It is interesting how they write the Letter: they begin, the Apostles, by saying “We and the Holy Spirit and think that …”. It is proper to synodality, the presence of the Holy Spirit, otherwise it is not synodality, it is a parlour, a parliament, another thing…

Let us ask the Lord to strengthen in all Christians, especially in bishops and priests, the desire and the responsibility of communion. May He help us to live dialogue, listening and the encounter with brothers in faith and with those who are far, to savour and express to the fruitfulness of the Church, called to be in every time a “joyous mother” to many children (cf. Psalm 113: 9).