"After praying for the poor, the children made 200 sandwiches twice, with care and generosity." An outreach towards the poor, inspired by "Laudato Si." 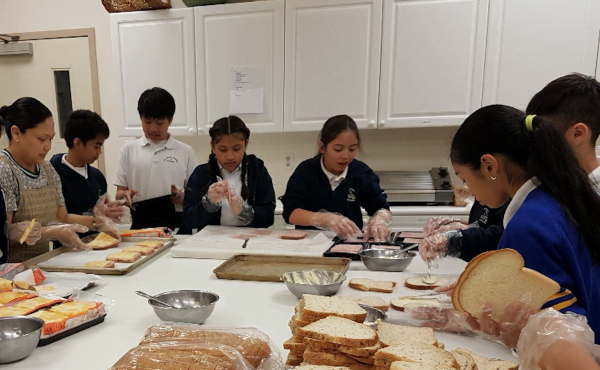 The theme at my daughter Anne-Marie’s Catholic elementary school last year was “Care for the Common Home” based on the encyclical Laudato Si, in which Pope Francis wrote about the present ecological crisis causing, among other injustices, global inequality.

Pope Francis appeals to us to think about how we can use our talents to care for God’s creation.

After a discussion with my daughter’s Gr 7 teacher on how the class could help the needy, we contacted a local charity called The Door is Open. This drop-in ministry provides food, clothing, shelter, counselling, and a safe environment to those in need in the heart of Vancouver’s downtown eastside, the poorest neighbourhood in Canada.

After praying for the poor, the children made 200 sandwiches twice, with care and generosity.

As our students did not meet their volunteers’ minimum age of 16, we opted to make sandwiches in our school’s kitchen and deliver them to their location. A volunteer from The Door is Open gave a presentation to the class on the needs of those who live and work in this neighbourhood, and the services they offer them. After praying for the poor, the children made 200 sandwiches twice, with care and generosity.

To raise money for this project and other charities that the class wanted to support, the Gr 7 ‘s organized a Fairy Tale themed fundraiser. The students, teachers and principal dress up as their favourite fairy tale character. The Gr 7 students made fairy-tale themed packages of candy, treats, hand-made bracelets and crafts to sell. They also ran a photo booth and showcased their musical talents at this event. 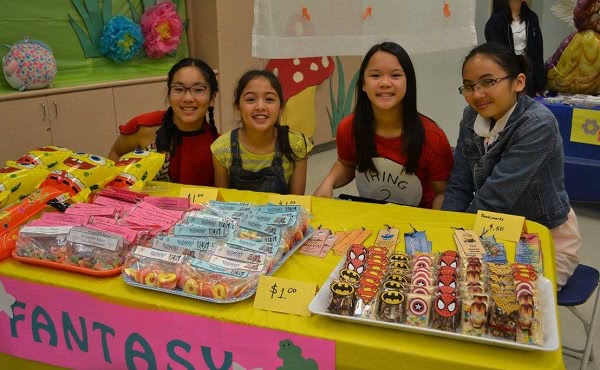 $1800 was raised and split between four charities: Canucks for Kid, The Door is Open project, Ronald McDonald House and LINCCO. Trevor Linden of the Vancouver Canucks came to the school to receive their donation.

LINCCO empowers impoverished young men and women to learn skills that will help them find a job or start a business.

Anne-Marie gave her classmates a presentation about LINCCO, a Canadian charitable organization that forms partnerships with local non-governmental organizations to provide skills training in developing countries. She told them about the Punlaan Technical School Project in the Philippines, which helps girls whose families cannot afford to send them to obtain higher education, and the medical missions in Vietnam and Uganda. Her classmates were impressed with the ways that LINCCO empowers impoverished young men and women to learn skills that will help them find a job or start a business. LINCCO also provides medical aid to people who do not have access to basic medical care, because they live in remote areas or they cannot afford them. 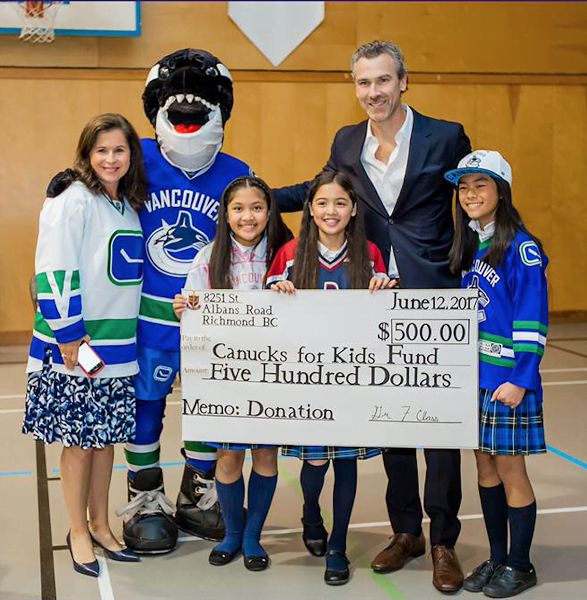 My husband and I also wanted to give our children and friends the opportunity to help the poor in Vancouver. We found an enthusiastic interest among our friends in playing a part in this project. Each family put together lunch bags that included a ham and cheese sandwich, a juice box and cookies, some adding a note of encouragement and love or Christmas greetings. A few of the families also made hot chili or soup. Twice during the winter months, downtown at Oppenheimer Park, we gave out the sandwiches and soup, as well as new and gently used jackets, gloves, hats and blankets to those in need.

Those we served shared stories with us, about their upbringing, their past lives, and their accomplishments.

Those we served were so grateful, and some shared stories with us, about their upbringing, their past lives, and their accomplishments. Some told us of loved ones they had just lost to a drug overdose. One man shared his knowledge of the history of the making of a specialized guitar with our teenage son, who also loves guitars. Another told us about the history of the neighbourhood.

This has been a rewarding experience for everyone. The number of families involved has grown. One family who had expressed concerns about safety and originally declined to join us, were glad they changed their mind and decided to help the next time. Another mom said "We have to do this more often!"

We also get together with friends and sing Christmas carols at a hospice for terminally ill patients in our city. We have visited the palliative care unit at Richmond General Hospital in the past. Our singing group, from 4-60 years old, has a wide range of singing styles and abilities. This brings joy to those nearing the end of their journey and their families who are often stressed and weary. It also allows the singers and their families to bond in faith and to pray for those who are suffering, to "hear the cry of the poor."