Serenading Our Lady of Guadalupe

After his stay of 40 days in Mexico in 1970, the hour came when the Founder of Opus Dei had to say adios: adios to his children, to the land of Mexico, and to our Lady of Guadalupe. 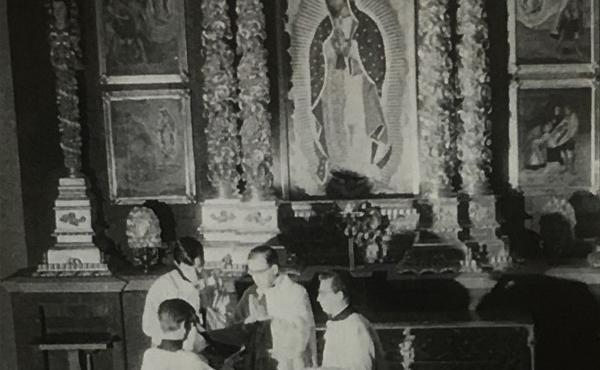 Saint Josemaria blesses the altar in the International Center of Studies in Mexico City, in 1970.

On June 22, 1970, his last full day in Mexico, Saint Josemaria went to the International Center of Studies in Mexico City after lunch to spend time with his sons living there.

The students tried to find ways to help the Founder rest, telling him some stories about the apostolic work they were carrying out, and even singing a song.

One of the residents with a good voice sang a song called Maria Elena. Its lyrics, although speaking about a human love, quickly led the Father to a supernatural consideration about love for our Lady:

“I want to sing for you Lady,

because you are my love,

Queen of my heart…

My heart is yours

O sun of my love,

Yours is all my love,

I dedicate my being to you…”

It was about 3:00 in the afternoon when Saint Josemaria listened to that song. Standing up, he suggested that they all go to the Villa of Guadalupe to serenade our Lady, singing for her this song and others that he had heard during his stay in Mexico.

An eye-witness to this event, Father Rafael Fiol Mateos, says in his book Pedro Casciaro: Hasta la ultima gota, that the Father’s proposal met with an enthusiastic response from everyone there. But right away Saint Josemaria raised the concern that doing so might draw attention to himself, which he was always trying to avoid. So he asked Don Pedro Casciaro: “If you think this could cause problems, we will have to tell these fellows no.” Don Pedro said he didn’t see any problem and that it seemed like a wonderful idea to him. 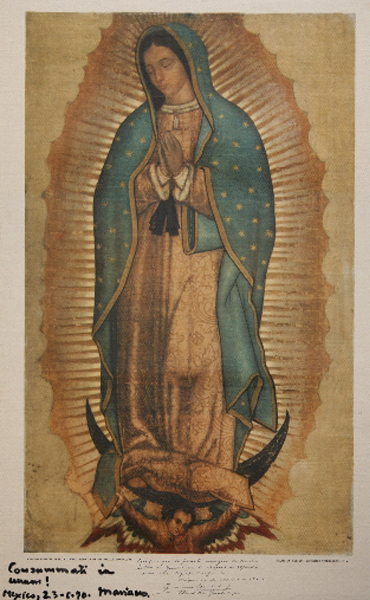 To attract as little attention as possible, they decided to go to the Villa to serenade our Lady of Guadalupe when the public acts of devotion had finished, at 8:00 in the evening.

The news that Saint Josemaria would go to say farewell to our Lady of Guadalupe at 8 pm spread rapidly among all the faithful of the Work in Mexico City.

Various responsibilities were quickly distributed. One group took on the job of transcribing the songs that would be sung to our Mother; others would provide mimeographed copies; a third group would rent the buses needed to transport the many people who wanted to go, many of them having come from the United States, Canada, and Central and South America.

The women, on their part, quickly mobilized and reached the Basilica almost three hours ahead of time, occupying the first rows in the church.

The priest who was celebrating the last Mass that day turned around to fulfill the rubrics established for the Mass with the priest’s back to the people then in force, and was amazed to see the huge crowd that late in the day.

By the time the Mass ended, the Basilica was completely full. The doors of the sanctuary were shut at the usual time, with the members of the Work, family members, friends and cooperators remaining inside. Some of the faithful who had attended the final Mas of the day also decided to stay.

On reaching the Basilica, Saint Josemaria and those accompanying him entered through the sacristy, as they had done during the days of the novena in May. After a brief visit to the Blessed Sacrament, he went to the central altar and knelt before the image of our Lady. A few minutes later he stood up and began singing the Salve Regina, with everyone present joining in with great fervor. Then he went to a kneeler at the right side of the altar and the guitar music began.

The first song they sang was the one that had so moved him a few hours before: Maria Elena, and once again he struggled to hold back his tears. Then the second song began: Morenita Mia. When the enormous spontaneous choir began singing the third song Gracias, the Father had to get up and leave the Basilica, visibly moved. Don Pedro offered him a clean handkerchief, exchanging it for the one with which he had just dried his tears. That handkerchief is now preserved in the Regional Commission of Mexico as a remembrance of his trip.

“Father pray a lot for us, so that we may have the same strong faith, the same love for our Lady that this marvelous people of Mexico has, and thus earn the right to have you come see us soon in the United States.”

On June 22, in the evening, after the moving serenade to our Lady in the Villa of Gaudalupe, when Saint Josemaria was preparing to retire for the evening, a group of his sons from the United States arrived with a gift: a silver plaque engraved with the words of the young American woman. Despite the late hour, Don Pedro Casciario decided to bring it right away to the Father. When Saint Josemaria read it he was deeply moved and told Javier Echevarria: “Jave, see if you can make this fit in the suitcase; I want to bring it to Rome.”