Homily of John Paul II at the canonization of Josemaría Escrivá

The homily given by the Pope at the canonization of the founder of Opus Dei, on October 6, 2002. 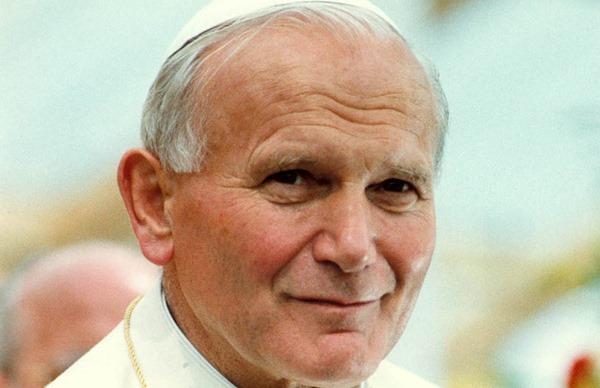 1. "All who are led by the Spirit of God are sons of God" (Rom 8:14). These words of the Apostle Paul, which we have just heard, help us understand better the significant message of today's canonization of Josemaría Escrivá. With docility he allowed himself to be led by the Spirit, convinced that only in this way can one fully accomplish God's will.

This fundamental Christian truth was a constant theme in his preaching. Indeed, he never stopped inviting his spiritual children to invoke the Holy Spirit to ensure that their interior life, namely, their life of relationship with God and their family, professional and social life, totally made up of small earthly realities, would not be separated but would form only one life that was "holy and full of God." He wrote: "We find the invisible God in the most visible and material things" (Conversations with Josemaría Escrivá, n. 114).

This teaching of his is still timely and urgent today. In virtue of the Baptism that incorporates him into Christ, the believer is called to establish with the Lord an uninterrupted and vital relationship. He is called to be holy and to collaborate in the salvation of humanity.

2. "The Lord God took the man and put him in the garden of Eden to till it and keep it" (Gen 2:15). The Book of Genesis, as we heard in the first reading, reminds us that the Creator has entrusted the earth to man, to "till" it and "keep" it. Believers acting in the various realities of this world contribute to realize this divine universal plan. Work and any other activity, carried out with the help of grace, is converted into a means of daily sanctification.

"The ordinary life of a Christian who has faith", Josemaría Escrivá used to say, "when he works or rests, when he prays or sleeps, at all times, is a life in which God is always present" (Meditations, March 3, 1954). This supernatural vision of life unfolds an extraordinarily rich horizon of salvific perspectives, because, even in the only apparently monotonous flow of normal earthly events, God comes close to us and we can cooperate with his plan of salvation. So it is easier to understand what the Second Vatican Council affirmed: "there is no question, then, of the Christian message inhibiting men from building up the world ... on the contrary it is an incentive to do these very things" (Gaudium et spes, n. 34).

3. To elevate the world to God and transform it from within: this is the ideal the holy founder points out to you, dear brothers and sisters, who rejoice today to see him raised to the glory of the altars. He continues to remind you of the need not to let yourselves be intimidated by a materialist culture that threatens to dissolve the genuine identity of Christ's disciples. He liked to repeat forcefully that the Christian faith is opposed to conformism and interior inertia.

Following in his footsteps, spread in society the consciousness that we are all called to holiness whatever our race, class, society or age. In the first place, struggle to be saints yourselves, cultivating an evangelical style of humility and service, abandonment to Providence and of constant listening to the voice of the Spirit. In this way, you will be the "salt of the earth" (cf. Mt 5:13) and "your light so shine before men, that they may see your good works and give glory to your Father who is in heaven" (ibid., 5:16).

4. Those who want to serve the cause of the Gospel faithfully will certainly encounter misunderstandings and difficulties. The Lord purifies and shapes all those he calls to follow him with the mysterious power of the Cross; but "in the Cross," the new saint repeated, "we find light, peace and joy: Lux in Cruce, requies in Cruce, gaudium in Cruce!"

Ever since August 7, 1931, when, during the celebration of holy Mass, the words of Jesus echoed in his soul, "when I am lifted up from the earth, I will draw all to myself" (Jn 12:32), Josemaría Escrivá understood more clearly that the mission of the baptized consists in raising the Cross of Christ above all human reality and he felt burning within him the impassioned vocation to evangelize every human setting. Then, without hesitation, he accepted Jesus' invitation to the Apostle Peter, which we just heard in this square: "Duc in altum!" (Put out into the deep). He transmitted it to his entire spiritual family so that they might offer the Church a valid contribution of communion and apostolic service. Today this invitation is extended to all of us: "Put out into the deep," the divine Teacher says to us, "and let down your nets for a catch" (Lk 5:4).

5. To fulfill such a rigorous mission, one needs constant interior growth nourished by prayer. St. Josemaría was a master in the practice of prayer, which he considered to be an extraordinary "weapon" to redeem the world. He always recommended: "In the first place prayer; then expiation; in the third place, but very much in third place, action" (The Way, n. 82). It is not a paradox but a perennial truth: the fruitfulness of the apostolate lies above all in prayer and in intense and constant sacramental life. This, in essence, is the secret of the holiness and the true success of the saints.

May the Lord help you, dear brothers and sisters, to accept this challenging ascetical and missionary instruction. May Mary sustain you, whom the holy founder invoked as "Spes nostra, Sedes Sapientiae, Ancilla Domini!" (Our Hope, Seat of Wisdom, Handmaid of the Lord).

May Our Lady make everyone an authentic witness of the Gospel, ready everywhere to make a generous contribution to building the Kingdom of Christ! May the example and teaching of St. Josemaría be an incentive to us so that at the end of the earthly pilgrimage, we too may be able to share in the blessed inheritance of heaven! There, together with the angels and all the saints, we will contemplate the face of God and sing his glory for all eternity.