"Knowing the 'why' of each job changes how we work"

The Prelate of Opus Dei spoke at a recent Congress about work held at the Pontifical University of the Holy Cross in Rome. What follows is a summary of his remarks, delivered during an academic colloquium that lasted an hour. 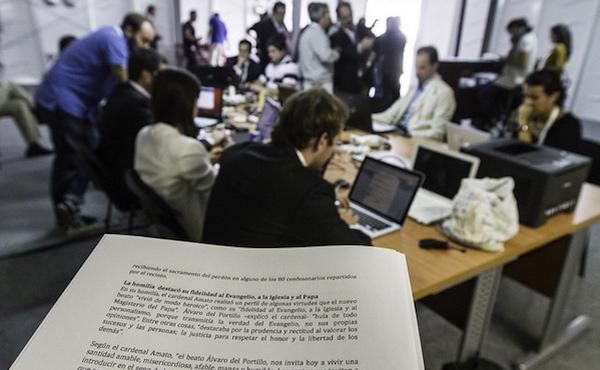 Marking 500 years since the Protestant Reformation, an international Congress on "the Future of Work and its Meaning" was held at the Pontifical University of the Holy Cross in Rome.

Monsignor Ocáriz, Chancellor and former professor at the University, began his remarks with a question: "What does it really mean to sanctify work? Within the context of sanctifying ordinary life, work occupies a very important place; not only because of the amount of time dedicated to it, which is a lot, but also because of the consequences our work has for ourselves and other people. Work and family are, together with our relationship with God, the columns that uphold God's design for humanity, as Genesis narrates to us."

Referring to a scene from the movie There be Dragons, the Prelate reflected on the moment when Saint Josemaria understood his mission from God and the message of the sanctifying value of work: "In this moment of the film, the actor playing Saint Josemaria is shown writing down the words 'Everyone and everything.' Everyone is called to holiness; all honorable human realities, all jobs can and should become a path, a means to holiness, to encountering Jesus Christ. Sanctifying work, any honest work, means to do it for God and for others, which demands of us that we do it well. Work stems from love and leads us to Love (with a capital 'L'), in every circumstance of our lives."

Sanctifying work, any honest work, means to do it for God and for others, which demands of us that we do it well.

Citing a text of Saint Josemaria ("Add a supernatural motive to your ordinary work and you will have sanctified it."), Monsignor Ocáriz said, "this doesn’t mean adding on a pious detail. We’re talking about the finality of our work: the why and for what of work, which affects the very way in which we carry it out. And what is this supernatural motive? Love for God and service to others."

Various comments were made in reference to a video about work and Saint Josemaria that had been shown previously:


An extended round of questions and answers followed the Prelate's remarks. One professor brought up a conversation he had had with a Lutheran colleague of his about whether or not the sanctification of work was just something having to do with our personal relationship with God or if it could actually produce a change in the work itself.

When Saint Josemaria set to work, he would say to Christ – with or without words – 'We’re going to do this together.'

Monsignor Ocáriz replied: "Something becomes holy in so far as it is offered to God. The things of this world already belong to God, but through our freedom they acquire a new dimension. With our freedom the same work, including its material aspects, can become holy, thus becoming more God's."

The Prelate also recalled how "when Saint Josemaria set to work, he would say to Christ – with or without words – We’re going to do this together."

Towards the end, another person asked how to discover the something holy that the founder of Opus Dei often talked about, especially among jobs as diverse as being a university professor to being the mother of a family. “By discovering in everything an expression of God's love for us: in people, in circumstances, in the material reality of different tasks, in setbacks. Saint John wrote, giving a summary of the Apostles' experience of their relationship with Christ: We have come to know and to believe in the love God has for us. Discovering that quid divinum is to see others as creatures loved by God; even in difficulties that we don’t understand, seeing God's hidden love.”