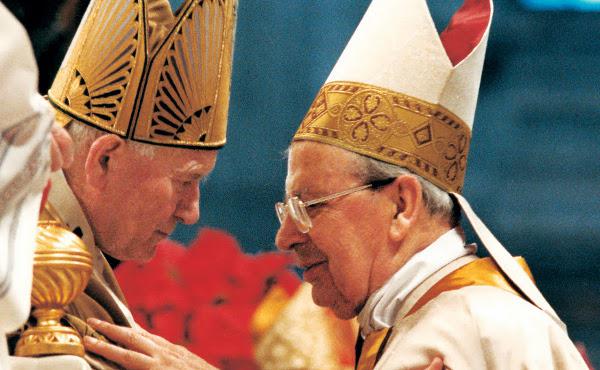 23 March 1994: he died in Rome, with a reputation for holiness. That same day, 23 March, Blessed John Paul II went to pray beside his mortal remains.

6 December 2002: decree is published in “Romana” (http://en.romana.org/), the official bulletin of the Prelature of the Holy Cross and Opus Dei, and displayed at the entrance to the offices of the curia of the Prelature. The aim of this decree, addressed to the faithful of the Prelature, was to collect the writings of the Servant of God and any documents about him, favourable or otherwise.

4 July 2003: Cardinal Camilo Ruini, Vicar for Rome, directed that a similar decree, for the faithful of the diocese of Rome, be displayed at the entrance to the diocesan offices and published in the in the Rome diocesan magazine.

21 January 2004: at the request of the Prelate (Bishop Echevarria) and of the Vicar of Rome (Cardinal Ruini), the Congregation decreed to grant the “nihil obstat” for the cause to be opened.

5 March 2004: Cardinal Ruini officially opened the process of the Tribunal of the Diocese of Rome “super vita et virtutibus” (on the life and virtues) of the Servant of God Bishop Alvaro del Portillo, in the Sala della Conciliazione of the Lateran Palace.

20 March 2004: Bishop Javier Echevarria presided over the first session of the process of the Tribunal of the Prelature, in the John Paul II Auditorium of the Pontifical University of the Holy Cross.

26 June 2008: the process of the Tribunal of the Diocese of Rome was brought to a close in the Lateran Palace; over 85 sessions, 25 witnesses were interviewed, including 11 cardinals, 6 bishops, 4 priests and one monk.

7 August 2008: the first phase of the process of the Tribunal of the Prelature was brought to a close in the Auditorium of the Pontifical University of the Holy Cross; 133 witnesses were interviewed, all in person (“de visu”) except 2; 62 were faithful of the Prelature, 71 were not; among the witnesses were 19 cardinals, and 12 archbishops and bishops.

19 February 2010: Fr. Cristoforo Bove, OFM Conv., Relator of the “Positio” of the cause of canonization of Bishop Alvaro del Portillo, presented the “Positio super vita et virtutibus” (documentation on the life and virtues) of the Servant of God Bishop Alvaro del Portillo. It comprised 2,530 pages in 3 volumes: “Informatio” (Information), “Summarium” (Summary) and “Biographia documentata” (Biographical details). The length of the “Positio” was due to the number of investigations carried out and the sources researched (searches were made in 63 archives – ecclesiastical and civil, public and private).

10 February 2012: the General Promoter of the Faith, Fr. Luigi Borriello, OCD, put the question to the theological consultors of the Congregation of the Causes of Saints as to whether the Servant of God Bishop Alvaro del Portillo had practised the virtues heroically. They unanimously gave an affirmative answer.

5 June 2012: Cardinal Antonio Cañizares put the same question to the regular meeting of the cardinals and bishops who are members of the Congregation for the Causes of Saints. They announced that they had reached the same decision.

28 June 2012: The Holy Father Benedict XVI authorized the Congregation for the Causes of Saints to promulgate the decree on the heroic virtues of Bishop Alvaro del Portillo.