Benedict XVI: the Crib and the Christmas Tree have a Christian Meaning

Benedict XVI said that the crib and the tree are symbols that help us to remember Christmas’ true meaning: that God has become man in order to help us.

The group from Tyrol who donated the Christmas tree which has been placed in St. Peter’s Square were recently received by the Pope in the Vatican.

“Christmas is a Christian feast, and its symbols, especially the crèche and the decorated tree, are important references to the great mystery of the Incarnation and the birth of Jesus, which are constantly evoked by the liturgies of Advent and Christmas.”

“This ancient spruce tree,” the Pope said, referring to the tree, “cut down without damage to the forest and now properly adorned, will remain next to the crèche until the end of the Christmas season. It is a meaningful symbol of Christ’s birth, because its evergreen branches recall for us the life that does not die.”

“The tree and the crib,” he continued, “are elements of the customary spirit of Christmas that forms part of the spiritual patrimony of our communities. It is a spirit filled with religiosity and family intimacy, which we ought to preserve even in present-day societies where at times career, consumerism and the search for material things seem to dominate.

As is customary, the Holy father celebrated a Mass for university students in St. Peter’s  basilica. At the end of the Mass, he spoke for a while with them and reflected on the spiritual formation of youth and on his recent encyclical, Spe salvi. 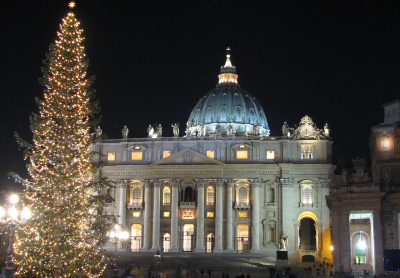 The Pope called on them to “fix your sight on the Virgin Mary and learn from her ‘yes’ to say your own ‘yes’ to the divine call. The Holy Spirit enters into our life to the degree that we open our hearts with our ‘yes.’ The fuller our ‘yes,’ the fuller will be the gift of his presence.”

Speaking to university students about his encyclical, the Pope said that “a materialist mentality has spread, which is fed by the hope that, by changing economic and political structures, there will at last be born a just society where peace, freedom and equality reign.”

“This process, which is not without values and has its historical reasons, contains, nevertheless, a fundamental error: human beings are not simply the product of determinate economic or social conditions. Technical progress is not always accompanied by the moral growth of persons. Rather, as has happened and unfortunately still happens, without ethical principles, science, technology and politics can be used, not to create the good, but rather to cause evil to persons and humanity.”