Commentary on the Gospel: The Horizons of God

Gospel for the 24th Sunday in Ordinary Time (Year B), and commentary. 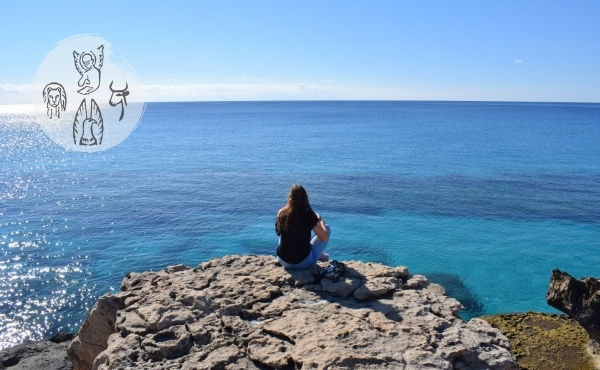 And they told him, “John the Baptist; and others say, Elijah; and others one of the prophets.”

And he asked them, “But who do you say that I am?”

Peter answered him, “You are the Christ.” And he charged them to tell no one about him.

And he began to teach them that the Son of man must suffer many things, and be rejected by the elders and the chief priests and the scribes, and be killed, and after three days rise again. And he said this plainly. And Peter took him, and began to rebuke him. But turning and seeing his disciples, he rebuked Peter, and said, “Get behind me, Satan! For you are not on the side of God, but of men.”

And he called to him the multitude with his disciples, and said to them, “If any man would come after me, let him deny himself and take up his cross and follow me. For whoever would save his life will lose it; and whoever loses his life for my sake and the gospel’s will save it. For what does it profit a man, to gain the whole world and forfeit his life?”

Jesus traveled great distances on foot with his disciples to take the gospel everywhere. In this Sunday’s passage, we see him 40 miles north of Capernaum on his way to Caesarea Philippi, a city rich in vegetation and water that Herod founded in honor of Caesar Augustus and gave to his son Philip. In this royal city and its surrounding villages Jesus questions his disciples about his own identity: “Who do men say that I am?” (v. 27).

Peter is the only one who knows how to answer in a way that accords with the mystery of the Person of Jesus: “You are the Christ” (v. 29). But Peter grasps this truth in his own way and, deep down, he is as human in his understanding as the others. For when Jesus announces his future suffering, Simon forcefully rejects this possibility.

Peter was so vehement in his badly focused affection that he received from Jesus a strong and serious warning: “Get behind me, Satan! For you are not on the side of God, but of men” (v. 33).

Our Lord teaches us that to follow him we need to have supernatural outlook, that is, the ability to see events and people as God himself sees them. And this is not always easy. Above all, when it comes to accepting the Cross and what makes us suffer as part of God’s plans.

And the Pope concluded: “My wish is that all of us, after these days of grace, will have the courage, yes, the courage, to walk in the presence of the Lord, with the Lord’s Cross; to build the Church on the Lord’s blood which was poured out on the Cross; and to profess the one glory: Christ crucified. And in this way, the Church will go forward.”[1]

We acquire supernatural outlook by putting care into our dialogue with God, reserving fixed times to be alone with Him. Then our pupils dilate and our outlook broadens; our understanding of events acquires a deeper perspective and we begin to glimpse unsuspected horizons: the horizons of God.

As Saint Josemaria said: “Most people have a plane-like vision, stuck to the earth, of two dimensions. When you live a supernatural life, God will give you the third dimension: height, and with it, perspective, weight and volume.”[2]