In Kenya, university students are trained so that they in turn can train rural women who lack business skills, to engage in income-generating activities, to start and run their own micro businesses.

Ngarariga and Riara are two villages that form part of Limuru Division, in Kiambu District. It is characterized by hills, plateaus and high-level structural plains that are ideal for coffee and tea plantations. Tea and coffee picking are the major source of income in this area.

People come here from all over Kenya in search of casual labour. Usually they live as squatters. During the peak season they work, but are laid off during low seasons. This means that half the year they do not have a steady source of income.

Ngong Area is one of the 6 divisions that make up Kajiado District. The population consists mainly of Maasai, who are herdsmen. Due to their nomadic way of life, they are often illiterate. This is especially the case with girls, who are married off at around 15 years of age. Marriages are arranged by the parents in exchange for livestock as dowry and the girls have rarely learned enough to be employable.

Kianda Foundation came up with the idea of harnessing the talents of university women in a Training of Trainers project (TOT).

In 2003, in order to help rural women from Ngarariga, Riara and Ngong, Kianda Foundation came up with the idea of harnessing the talents of university women in a Training of Trainers project (TOT). Through this program, University students are trained so that they in turn can train rural women who lack business skills, to engage in income-generating activities, to start and run their own micro businesses.

To date, 512 women have benefited from the program, with the participation of 73 university students. Most of those women were between 25 and 60 years of age, with a few over 60. These were grandmothers whose children had died of HIV/AIDS and so they must work to bring up their orphaned grandchildren.

The Training of Trainers Programme is fruit of the social concern that St. Josemaria Escriva, founder of Opus Dei, had and inculcated by word and example in millions of people.

The Course Director, in charge of the project, Mrs. Susan Kinyua, selects and prepares the university students – around 15 each time – in an intensive one-week Entrepreneurship Course. “I explain to them where the women come from and where we want to take them”, says Mrs. Kinyua.

The Course is followed by a period of personal preparation through sessions on personality development – human virtues – and research. During this time the students visit the dwel-lings of the 80 women who have been chosen for the programme and they fill in a questionnaire.

The women are selected from among those recommended by the local Parish or Community Development Office. Although only 80 can be taken at a time, many more women appear for the interview.

“In December 2005 when we went to Kamirithu to introduce the project, we found 3,000 women waiting for us!”, tells the Director. After the university students have been prepared, they start the work sessions.

An important part of the women’s training is what is called “Life Skills”, or the Christian and human virtues that are required for life: honesty, cheerfulness, spirit of service, hygiene, good manners… which end up benefiting their families and society in general. As Mrs. Kinyua says: “The project affects the whole person; the women learn to make better use of things, to be clean… and an immediate consequence is that they grow in self-esteem.”

The one-month training covers everything needed for a successful business: planning, budgeting, bookkeeping, marketing, financial viability and saving. After that, each university student is in charge of helping a small group of women to plan her own business. When they have determined the amount of money needed to start that business, Kianda Foundation grants the amount from funds provided by the European Union.

512 women have benefited from the program, with the participation of 73 university students.

“They appreciate the Life Skills we give them even more than the money”, says Mrs. Kinyua. “They are able to interact with other people. They see that we are really concerned about them, and they ask ‘Will you continue advising us after the project is over?’ We try to do that.”

The students follow up the women for six months in order to solve any problems, study their initiatives and assess the capacity for future development. Kianda Foundation links the promising ones to micro-finance programmes and helps them get credit to improve their businesses.

From their earnings the women are expected to return, weekly or monthly, 20% of the money they were loaned. The results have been quite spectacular. 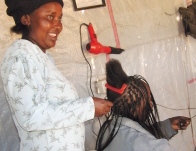 When Edith Muthoni’s husband died she was forced to move to a slum where she rented a room that was too small to accommodate both her children and herself. She left her children with their grandmother in the countryside and began a small business of buying and selling milk.

From whatever little she made she sent some to her mother for the upkeep of the children and used the rest for her own basic needs, such as food and rent. With the capital provided by the TOT project, she bought several different commodities such as vegetables, eggs and milk. The profits have been good and she has since managed to build a house in the slum and is now reunited with her children.

Alice Waithera Kamau from Ngarariga enjoyed the cookery classes a lot and she agrees with the saying that, “the easiest way to a man’s heart is through his stomach.” After the lessons learnt during the training, her husband and children look forward to mealtimes at home.

Besides she now prepares some of the snacks such as mandazi, drop scones and doughnuts for sale in her kiosk (which she set up with the help of the project) instead of buying them. In this way she is able to get a higher profit margin.

Hannah Wakaba from Ngong has been a widow for 10 years and she had this to say: “Being a widow I used to have a lot of self pity and I had lost my self-confidence. I had this feeling that everyone looked down on me. Now I’m more cheerful and I have joined a support group of other widows where I share the positive values such as hard work, punctuality, cheerfulness, selfconfidence and honesty, which I learnt during the life-skills sessions. I have learnt to look at the positive side of life! My three children have noticed the difference.”

Poor in Kenya: (Earning less than 1 US$ a day to support the family)

The Training of Trainers Programme is fruit of the social concern that St. Josemaria Escriva, founder of Opus Dei

In line with its Mission Statement – the promotion of the social, educational and spiritual welfare of women in Kenya – Kianda Foundation wants to foster in university students a concern for the less privileged.

As Saint Josemaria Escriva, the founder of Opus Dei, points out in a press interview: “A university should not form men and women who will egoistically consume the benefits they have achieved through their studies. Rather it should prepare students for a life of generous help to their neighbour, of Christian charity” (St. Josemaria Escriva de Balaguer, Conversations with Msgr. Escriva, n°. 74)

It has recently been reaffirmed in the teachings of Pope Benedict XVI who writes: “There will always be suffering which cries out for consolation and help. There will always be loneliness. There will always be situations of material need where help in the form of concrete love of neighbour is indispensable (…). For young people, this widespread involvement constitutes a school of life which offers them a formation in solidarity and in readiness to offer others not simply material aid but their very selves” (Deus Caritas Est, nn. 28-30).