On Saturday 9th May, 32 deacons from 14 countries will be ordained priest in San Eugenio Basilica in Rome at the hands of Bishop Javier Ecchevaria, Prelate of Opus Dei. Of the 32 deacons, the youngest comes from Kenya: Deacon James Mwara Njung’e. The other deacons hail from Spain, Poland, Ecuador, United States, Nigeria, Mexico, Taiwan, Brazil, Guatemala, Colombia, Austria and Argentina. We caught up with Kenyan deacon to ask him a number of questions. 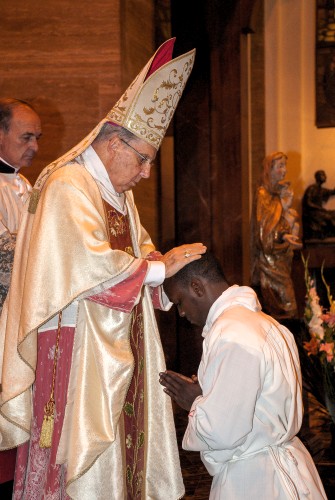 Q. Good morning! Can we call you Father yet or does that come with being ordained priest?

Good morning! No. I'm still a deacon, so guys can start calling me father only after the priestly ordination.

Q. Tell us a bit about your family...

My dad works as a manager at Kenya Horticultural Exporters. Mum was a high school English teacher. She retired some years back. Our home's in Kinoo, along the road to Naivasha. I have two sisters. The elder one's currently looking for employment while the younger is finishing a masters course in Bio-technology at the University of Nairobi.

Q. After living in Kenya your entire life, what struck you most when you moved to Rome for your studies?

Well, many things struck me. I must say I was highly impressed by the efficiency in many aspects of life, but at the same time, I discovered many things that need improving, for example, the need to re-Christianize the European society. In any case, just like in Kenya, there are many good people here as well, and guys love the Pope a lot!

Q. We're informed that you are doing a PhD in theology: what field did you choose?

Q. What do you find so fascinating about this field?

The fact that one gets - in a certain way - closer to the Bible, to the faith of the early Christians. This is because we're taught not only the languages in which the Bible was written, but also the cultural and religious backgrounds in which the books of the Bible appeared.

Q. And what course did you study while in university?

Computer Science, at the University of Nairobi.

Q. Any good memories from your years there?

Plenty! I made many good friends, most of whom I'm still in contact with. I also had good relations with the professors and lecturers, who were really professional and would open many fields of interest for us and spur us on to learn more through their example.

Q. Was it there that you learnt about Opus Dei?

No. I got in touch with the Work while I was still in high school, at Lenana School.

Q. Lenana School! How was that?

Well, it so happens that some university students - some of them were faithful of Opus Dei while others at that time had not yet joined - would come every Sunday afternoon to give doctrinal talks to whoever wished to receive them. I was interested, since I wished to deepen the doctrine I had received in catechism classes as a kid. So I began attending them and little by little got to learn more of the spirit and charism of Opus Dei, which is that everyone could become a saint in whichever situation he found himself or herself, as long as it was pleasing to God. The Catholic chaplain was a priest of Opus Dei, so he would also help me along the way.
In addition to this, some Marist Brothers also used to come to the school and give a helping hand with YCS (Young Christian Society). All these guys helped me grow spiritually and discover my vocation. 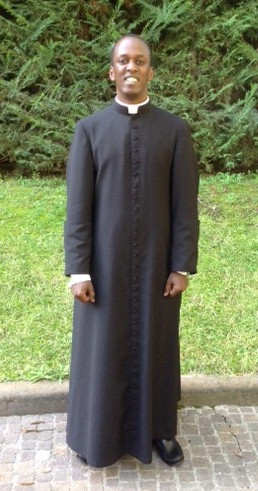 Q. And what are some of your fondest memories from Lenana?

They're countless! The many trips we'd make to different schools, the sports activities, last minute efforts to study so as not to fail exams [cheeky laugh], the time we all walked out of school at midnight because we weren't having any lessons due to the nationwide teachers' strike, and, like any teenagers, we needed something to do so we just left school and went home, the time I got suspended together with two pals of mine for tampering with some electrical stuff…

Q. When did you join Opus Dei and did you ever think you would end up being a priest?

I joined Opus Dei the year after finishing high school, before joining campus. Nope – I never thought I'd become a priest but was very open to whatever God wanted of me. At the time, like any young dude, I was thinking of finishing campus as soon as possible so as to start making as much money as I could!

Q. After you joined Opus Dei, what activities were you engaged in?

I continued doing the same things as before, only that this time, I was more conscious of the fact that they were my means to obtaining sanctity. Hence I put more effort in studying well, in helping out my folks back at home, in being a good pal to my pals. In addition, I decided to help out in some catechism classes that some other members of Opus Dei would give to students in Lenana School. I did the same for a while at Mangu as well. when I started Campus, I started helping out in giving doctrinal classes not only to my pals at the University but also to other studying at KU.

Q. How has your family taken the news that you will become a priest? Will they be travelling to Rome for your ordination?

There are currently in the seventh heaven! [big smile]. Yeah, they're already making preparations to come over.
I hope and pray that they don't meet any difficulties in that.

Q.While in Rome, have you got to meet Pope Francis? What are your impressions of him?

If by "meet" you mean "having a chat with him", well, the answer is no. But I've managed on various occasions to be quite close to him and once I managed – together with many other guys – to shake his hand. Just like any other Pope, he's really doing a good job in guiding the Church. I pray for him always and ask you guys to pray for him as well.

Q. And I suppose you have had many chances to meet your Bishop, or as he is fondly called "the Father". What can you tell us about the kind of man he is?

Yeah, I've been with him many times. He's just like any father, he is always concerned with his children in Opus Dei. He's also very prayerful and spurs us on, with his example, to continue in the daily struggle to seek holiness in the normal ordinary occupations.

Q. Any idea when you'll be returning to Kenya or tasks that you'll be assigned once you land?

No idea. I'm fully available to go wherever my bishop wishes me to carry out my priestly duties.