Giving more than a handout

In Kenya, Kimlea Technical Training Centre, a project of Kianda Foundation, has empowered over 70 female IDPs by giving them new skills to enable them earn a living.

When the fumes of a raging fire at the Assemblies of God Church in Eldoret town, Kenya, started suffocating her, Nancy Nyambura’s survival instinct went into high gear. She looked for the nearest window, forced it open and jumped out. But cries from two boys still stuck inside moved her to go back in and rescue them. As she tried to get out a second time, falling debris fell on her hand. She was lucky to escape. 30 people perished on the spot, their charred remains buried under the debris of the burnt building.

“I went straight to hospital with the children. I didn’t even know who their parents were. I had to keep going for a week at the Moi referral hospital because of my injured hand. By then I had moved to the Eldoret Cathedral joining other people evicted from their homes,” she said.

“They are learning cookery, knitting, sewing and business skills because most of these women were farmers and since they don’t have farms here they need to learn other ways in which they can earn their living even though times are difficult.”

That was in early January this year when heightened insecurity in Eldoret town forced the 26-year-old and other women and children from Kiambaa village to seek refuge in the church thinking no one would attack a sanctuary. Armed youth, annoyed with the outcome of the presidential elections were on rampage in the area destroying property and killing anyone who belonged to President Mwai Kibaki’s tribe. A group of men who were standing outside the church to protect the women and children fled after they were outnumbered and overpowered leaving those inside to their fate. The gang proceeded to set the church on fire and barricaded the doors by piling blazing mattresses at the front.

10 months later, Nyambura is living in a camp set up for internally displaced persons (IDPs) at the Word of Faith Church, in Limuru town. The government moved her and 4 other members of her family there till the insecurity and animosity could cool down with promises of returning them back to their farms. Many other IDPs at the camp are women and children who survived the fire at the Kiambaa Church.

According to Pastor Peter Mbugua, who is running the camp, donations from well wishers have kept the situation at the camp from getting out of hand.

“The District Commissioner called us into his office and when we went there it was shocking to find a big lorry full of people with their belongings and he told us, ‘we have called you because we want you to take these people to your church and take care of them’, and they gave us nothing,” he said and added “so we didn’t have any idea where they were to sleep, we had no idea what they would eat that evening, but as soon as they got here some of them took the initiative to call Kameme fm, a local radio station and those were the first people to attend to our challenge.” 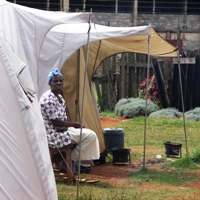 For many at the camp life is bleak. Other than food and shelter, hardly any of their other needs are met. Dwelling over past injustices has driven some insane. But Nyambura has not been idle. She started attending sewing, cookery and knitting classes at the nearby Kimlea Technical Training Centre. Kimlea is an initiative of Kianda Foundation, a local Foundation dedicated to the empowerment of women through education. The sessions were organised to give the women from the IDP camps skills that could help them earn a living. It was also an attempt to keep them busy. Counselling sessions are also given to help them come to terms with the past.

Frankie Gikandi, the principal of Kimlea said the project has trained 70 women to date.

“They are learning cookery, knitting, sewing and business skills because most of these women were farmers and since they don’t have farms here they need to learn other ways in which they can earn their living even though times are difficult,” she said.

Once the women had learned the skills, Kianda Foundation gave each of them capital to start a small business. Each one however has to pay back 20% of the loan.

With a capital loan amounting to 135 US dollars, Nyambura is now making poncho’s for sale using the knitting skills she learned. She has also bought petticoats in bulk which she sells to the town residents. Her efforts have enabled her to pay back the 20% loan she received.

“I have really benefited because I had never done crochet, never sat in front of a knitting machine, and now I know that my future life is assured because I will be able to earn a living,” Nyambura said.

Even as the women await the ‘Rudi Nyumbani’ program organised by the government to encourage the IDPs to go home or to restart life elsewhere, many of those who attended the training are already running their own businesses.

The government program involves giving the IDPs money to sustain themselves until they can get back on their feet and includes a package of 135 US dollars together with food rations for two months. An additional 350 US dollars will be paid to those who lost their homes to arson.

The Word of Faith camp still has 358 IDPS  waiting for this package. For most of them, going back home to their farms is simply not an option. Painful memories, the fear of more reprisals and the unsolved land question are obstacles that still loom large.

Nyambura’s family has opted to begin a new life in Limuru Town. Starting all over again to build a secure life is never easy, but for her, it will not be as difficult with the skills she has learned.