By Word and Example

A great gift for us all, fundamental to our education”, concludes his son, “was the daily experience of the love our parents had for each other, which was always on the increase. I think my mother was everything for my father and from the time he married his life would have no meaning without her”.

In a lecture he gave to parents in the Roca youth club in 1966 Tomás confided to those parents “I know from experience that all along the lives of our children there is a question that arises. We often ask ourselves: what should I do? But we find that same question constantly hovering over them, like a veil over their souls eager for knowledge, questioning everything around them: the people beside them, their companions, the sun and the stars, the day and the night, asking how and why they came into the world, the way they are to follow in it; asking about the depressing hut in the slum and the sumptuous palace, the good and the evil; inquiring of God himself, because he wants to understand him.

And we parents have to answer them; we have the duty to guess those questions and give them the right answers, realizing all that they imply. Sometimes we should talk to them about these matters, object of their silent questions, in friendly conversations, as equals. But many other times we give the answers by our example, not only in the big things of life, but also in the little things of everyday life, which are the ones that give value and poise to our seemingly intranscendental actions”.

“My father accepted his mistakes, which to me were very small, with simplicity and humility,” Rafael says. “He was impressively discerning in his judgement about people and situations. Without presuming in any way to be right, he was.” 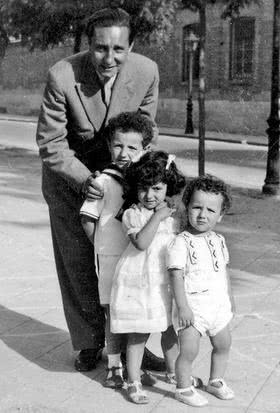 The forge of love

“In him faith was not something external that had to be adhered to, but something practical. His hope, ever so firm, spread great security around him, without his setting out to do it. Love for God was fundamental to him and he showed it with all naturalness. His piety, his love for the Eucharist and the Blessed Virgin were deep, attentive and sober, without any kind of theatricals. At home the Rosary was said every day. We children were invited to join, but he never imposed it or even hinted. A great gift for us all, fundamental to our education”, concludes his son, “was the daily experience of the love our parents had for each other, which was always on the increase. I think my mother was everything for my father and from the time he married his life would have no meaning without her”.

Tomás Alvira was a firm defender of parents being the first, main and irreplaceable educators of their children, on whom depend the future of society. “The home,” he concludes in his talk to the parents in Roca Club, “is the workshop where every day the weave of the children’s formation is woven. The bonds of love between all those who make up the family are formed there, amidst joys and sorrows. And for Catholics it is also the beautiful altar where the family adores God. With homes like this the world would be transformed.”