Birds of a feather…

This is an article published by The Messenger magazine, run by the Conventual Franciscan Friars in Kenya, in their January 2015 issue. It recounts the relationship between Blessed Alvaro and Cardinal Otunga.

It must have been the autumn of 1977. I was only three months old in in a city which, with the passing of years, has rightly earned the adjective 'eternal': Rome. I had gone there for my ecclesiastical studies and was set to enjoy every bit of my stay there because Cavabianca —for that is the name of the Seminary— was home away from home.

It therefore came as a surprise that I was asked if I minded going to Villa Tevere —the headquarters of Opus Dei where Don Alvaro stayed— and meet Maurice Cardinal Otunga, who was then the Archbishop of Nairobi. He was in Rome for official duties and Don Alvaro had invited him home for a meal. I was able to see him after his meeting with Don Alvaro. I am not sure he had any prior knowledge that I was in Rome but on explaining the reason for my stay there he understood immediately. He was very warm and fatherly. A few days later I met Don Alvaro who told me that the Cardinal had been so kind with him and, as he was quite strong, gave him a hug that left him 'crushed'. 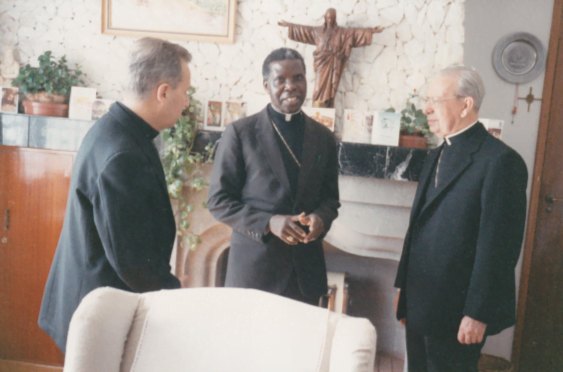 The two prelates got on very well. It was a case of deep friendship on first sight. With a bit of historical hindsight, I now realize this was mainly because they were quite alike, both by natural endowments and also by virtue. Both were characterised by an evenness of temper, even under stress. They were poised and self-possessed, calm and unemotional; thoughtful and quiet besides enjoying lots of common sense. Likewise both possessed a paradoxical mixture of personal humility and a fierce resolve. They were timid and ferocious; shy and fearless. Indeed these were qualities that made for a style of leadership that characterised both the prelates. One cannot help but think of the prophecy of Isaiah about the Servant of Yahweh, the perfect model for all leaders: "Behold, my servant whom I uphold; my chosen, in whom my soul delights: I have put my Spirit on him; he will bring forth justice to the Gentiles. He will not cry, nor lift up his voice, nor cause it to be heard in the street. A bruised reed will he not break, and a dimly burning wick will he not quench: he will bring forth justice in truth." (Isaiah, 42: 1-3).

I learnt from both these prelates that leadership is not about sabre-rattling; it is not about the ability to draw blood; it is not about inspiring fear; it is about having people skills; it is about the knack to get everyone on board; it is about spirit of service; it is about love. The above qualities in the Cardinal were perhaps misinterpreted as weakness, yet we are all aware how transformative his tenure was. The same can be said of the Servant of God, Don Alvaro del Portillo.

The experience I had in Rome was repeated some twelve years later when the two prelates met again, this time in Nairobi. Don Alvaro was on his first pastoral visit to Africa and he chose to come to Kenya first. As soon as he was able, he visited his old friend. Again it was a very warm encounter. I am not sure how strong the hug was this time round but one thing was clear: they stole each other's heart for ever. This was later shown in the immense love that Cardinal Otunga had for Opus Dei. When he appointed me Chaplain of Lenana he advised me that it was his greatest hope and prayer that some of those wonderful kids could join Opus Dei. It was also shown in a letter he wrote to Mgr. Javier Echevarría expressing his sympathy at the passing of Don Alvaro: "I was a witness of Bishop Alvaro's concern for the Church Apostolate in Kenya, of his generosity to many Kenyan priests and seminarians who were welcome in the Pontifical Athenaeum of the Holy Cross and in the International Seminary Sedes Sapientiae which he created, as well as of his charity, kindness and availability to the Bishops who sought his help."

God called Don Alvaro —the good and faithful servant— to his side on the morning of March 23, 1994, a few hours after his return from a pilgrimage of the Holy Land. There he had retraced Jesus' footsteps, from Nazareth to the Holy Sepulchre. On 6 September 2003, nearly 10 years later, the servant of God, Maurice Cardinal Michael Otunga followed him after some years of a sickness borne with true Christian spirit. Thus, after thirteen years or so of their second meeting, the friendship that bound them so strongly here on earth at last found its best expression, they are now linked not only by natural endowments and virtue, but also by sainthood: "do not ever forget that after death you will be welcomed [—embraced!—] by Love itself. And in the love of God you will find as well all the noble loves which you had on earth." (Josemaria Escriva, Friends of God, 221)

(First published in The Messenger, January 2015).