22nd of September there will be a solemn Thanksgiving Mass in Nairobi to celebrate 60 years since Opus Dei started stable work on the continent of Africa, precisely in East Africa. This is Part 3 of a series of articles tracing the history of that divine African adventure.

Education in East Africa in 1958

In part these obstacles were due to the legal framework in force at the time. Some of the highlights fro the Education Ordinance of 1924 include:

Soon after arriving, Fr. Casciaro contacted Msgr. Mojayski, the Apostolic Delegate. The Monsignor had been Apostolic Delegate in Mexico and there he had struck up a very close friendship with Fr. Casciaro. He was delighted that his old friend had come to Kenya to see him and said he was very much looking forward to their meeting. Don Pedro’s first aim was to explain in detail the reasons Msgr. Escrivá had to think that the starting of a Catholic university in East Africa was not feasible at that moment.

In their discussions Don Pedro pointed out at the main difficulty: in Great Britain the establishment of a university required a Royal Charter. It was the Privy Council which studied the matter and drafted a Charter to be presented to the Monarch for signature. Once the university was established, it was independent and enjoyed freedom from civil authorities. The Government provided funds and very carefully avoided giving any suspicion of interfering in the autonomy of universities.

Although British society and institutions were foreign to the apostolic Delegate, he had been in the diplomatic world for many years and understood the very serious difficulties involved in obtaining a Royal Charter. The negotiations would take years and, given the urgency of the educational need, the delay would render the project useless.Fr. Casciaro emphasised that, on the other hand, the idea of a pre-university course had the advantage of coming from the Colonial Government itself. He summarised for Msgr. Mojaisky the Government’s plans following Makerere College decision to discontinue their preparatory courses. The Government’s plans were that, out of an annual intake of 120 students to be trained in Kenya, 40 would be coming from the facilities provided for the Catholics. The course would be spread over two years, so that, after the first year there would be a turnover of around 80 students. Evidently, the colonial authorities thought that these figures would cover the numbers of students with adequate academic capacity which secondary education could provide for the time being.

Meanwhile, lawyers and accountants established courses for the granting of their own qualifications with recognition from their own national professional bodies. On the other hand, many years after our study of the possibilities of starting a university, Buckingham University made a start as a private university and after some time it granted degrees.

Don Pedro had made it clear to his friend the Apostolic delegate that we should “point out and explain to the authorities, right from the start, the secular nature of the members of Opus Dei and that this was not a mission school; nor were the teachers missionaries but secular, professional people with the appropriate academic qualifications, who were practising their respective professions in full freedom.”(cf. Gabiola, ut omnes… p. 61)

By 28th October Don Pedro was back in Rome, and celebrated there the election of the new Pope, John XXIII.

Soon before he died of cancer in 2009, someone asked Kevin O’Byrne how involved was St. Josemaría in the beginnings of Strathmore College. His answer was: there were periods in which we would talk with him on the phone every day. He could not have got more involved.

St. Josemaria, when visiting a country, would say: “I have come to see you and to learn. I am in your country looking forward to learning”. Don Alvaro did the same, very especially in his trip to Nairobi in 1989. He taught his children going to new countries to do the same: “When going to Kenya, therefore, we had to be ready to learn about our new country. There was not the slightest doubt about it, and we were gladly and wholeheartedly prepared to do it. But, then, we found that, in spite of our willingness, a deep grasp of things was not easy” remembers Fr. Gabiola in his Memoirs. 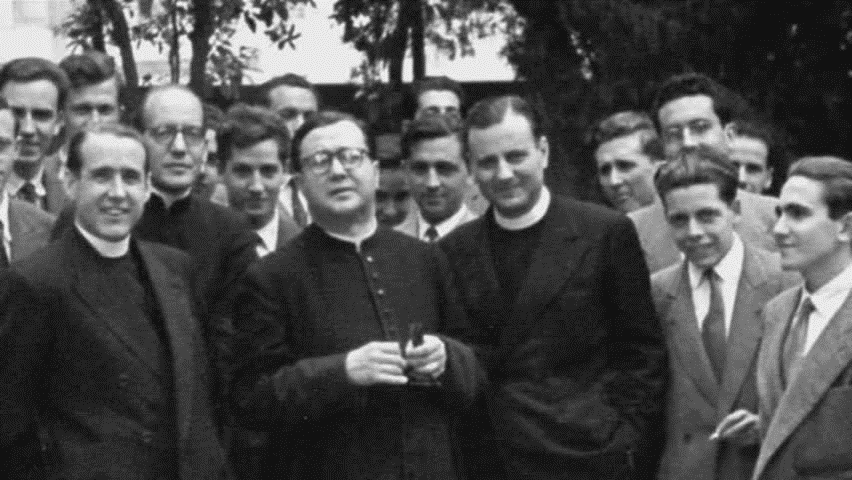 In those days, information about Africa was scarce and not always reliable.

“This difficulty in learning was, I think, the greatest barrier to our work and I now feel that our Founder knew it. Well aware of the need of first-hand knowledge, he hurried us to be on the ground without any wasted time. This was helpful but, all the same, when we arrived in Nairobi, there was practically no difference; we could not find a way to approach directly the African population or its culture; we were surrounded by Europeans in such an appalling way …” (Gabiola, Ut omnes…, 42)

Although five years had gone by since the beginning of the Mau-Mau problem when the people of the Work arrived in Nairobi, the emergency period had not yet ended and the real facts behind the conflict were not totally public at that time. While in Nairobi, Kikuyu men needed to carry pass books which had been issued to them in the fashion of some so-called “green books” of earlier times. There was in Nairobi among the Europeans curiosity about Jomo Kenyatta especially after his arrest in October 1952. People who were not born sixty years ago may find some facts and views about Kenya in the late 50’s possibly striking.

St. Josemaria had told us:

“We must be prepared to work from Pole to Pole with the affection of self-giving, with the love that soothes out all frictions. We will be, we will willingly make ourselves, of the race, of the colour, of the manner — whatever it might be — that exists in the country where Jesus Christ sends us to. And all this from the depth of our heart, and without ceasing to love very much our country of origin”. (Obras X-1957, p.10).