The parishioners of Saint Jacques Des Deux Plateaux de Cocody were fortunate to discover Opus Dei and its initiatives again during Masses held there on Saturday and Sunday, February 15th and 16th. 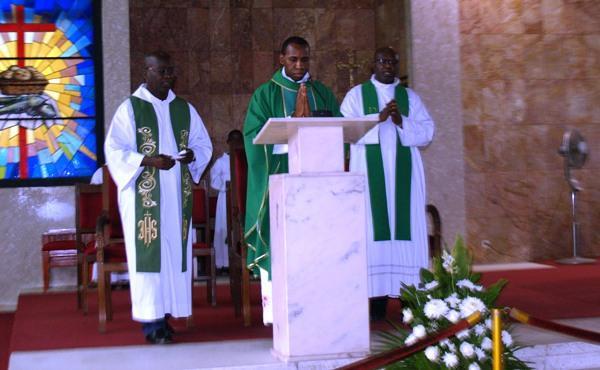 People had been told that on the 40th anniversary of Opus Dei's apostolic work in Ivory Coast, a caravan would be launched to present Opus Dei in certain parishes of the diocese of Abidjan. This caravan includes Mass celebrations on Saturdays and Sundays by a priest of Opus Dei, together with some lay people who will explain more about the Prelature and its work in Ivory Coast, and elsewhere. The parish priest, Fr. Augustine Obrou, and other priests concelebrated at the various Masses.

Fr. Sissoko, the Regional Vicar of Opus Dei in Ivory Coast, was present during the caravan launch. He told the people present why they had decided to make Saint Jacques the first stage of the caravan: the headquarters of Opus Dei in Ivory Coast is located on the territory of this parish. The first members of the Prelature who arrived in 1980 also lived in this same area. The first Mass on June 26, 1981, anniversary of St Josemaria's going to heaven, was celebrated in the former parish church.

He also commented on the texts of the 6th Sunday of ordinary time inviting the parishioners to experience the happiness that comes from unity of life and the search for holiness. Fr Sissoko said: "It was to lead many people to happiness that God inspired St Josemaría to found Opus Dei in the Catholic Church on October 2, 1928, remembering that all men and women are called to be holy in ordinary life, through their professional work. Holiness is the most perfect happiness that man can attain."

At the end of each Eucharistic celebration, the parishioners showed a lot of interest in the stands of Opus Dei and the exhibition on Opus Dei entitled 40 Years HERE.

Journalists present interviewed Fr Sissoko, some of the Work's faithful, members of the caravan organizing committee, and parishioners.

During his word of thanks to the clergy and parishioners of St Jacques, Fr. Sissoko announced the next stage of the caravan, which would take place in the parish of Our Lady of Tenderness on Saturday 22nd February at 7 p.m. and Sunday 23rd February at 6:45 a.m., 9 am, 11 am and 6:30 p.m.