The Founding of Opus Dei

October 2, 1928 was the milestone marking the moment when St. Josemaria was illuminated with a “clear general idea” of his mission.

October 2, 1928 was the milestone marking the moment when St. Josemaria 'saw' Opus Dei during his annual retreat. In his biography of the Founder of Opus Dei, Andres Vazquez de Prada explains how Josemaria was always thoroughly convinced that the Lord was the principle protagonist of that event, its principle author, the one who dominated the situation with his majesty and took initiative, imperiously bursting into the soul of his servant. “On that day”, he says, “the Lord founded his Work; he started Opus Dei” (1). He was deeply moved at what he saw then, and he recounts, “I gave thanks to the Lord, and I remember, with a heart full of emotion, the ringing of the bells of the Church of Our Lady of the Angels” (2). Later on, reflecting on that moment, he wrote: From that day onwards the ‘mangy donkey’” [he meant himself] “realized what a beautiful but heavy load God our Lord, in his inexplicable goodness, had placed on its shoulders. That day the Lord founded his Work: from then on I began to do apostolate with young laypeople, whether students or not. I formed groups. I prayed and got others to pray. And I suffered…”

He had been asking God for light for a long time, and now this was the answer to his prayers. As Cardinal Joseph Ratzinger said in 1992 during a Mass of thanksgiving for the beatification of St. Josemaria:

"Josemaria Escriva realized very early on that God had a plan for him, that he wanted something from him. But he didn’t know what it was. How could he find the answer, where should he seek it? He set out to search, above all, by listening to the Word of God, Sacred Scripture. He read the Bible not as a book of the past, nor as a book of problems to be argued about, but as a word for the present that speaks to us today: a word in which we are each the protagonist, and need to seek our place in it, to find our path." (3) 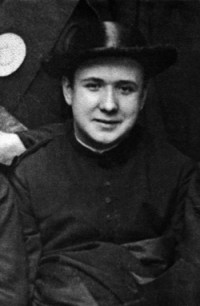 Msgr. Escriva always said emphatically that the institution was not his – it was not born of his analysis, reflection, or desire to respond to spiritual or material needs, as was the case with other religious families. Therefore it was not so much a “foundation” as a “revelation”. The name itself, Opus Dei – God’s Work – shows that it was all a part of God’s plan from the start, and that the priest from Saragossa, who was not just young but poor and alone, was chosen merely as an instrument. For some time, moreover, he was a somewhat recalcitrant instrument, to the point of trying to get out of this obligation, which he found not merely unattractive but frightening. (4)

It was only later that the name “Opus Dei” came about. When his spiritual director asked him how that “work of God” was going, it occurred to him that this was precisely what it was, a work of God, Opus Dei. In an interview some years ago, Cardinal Ratzinger mentioned how he had always been impressed by this biographical detail of the origins of the name:

Escriva knew that he should found something, but he was always aware that whatever it was it was not his work, that he had not invented anything, that the Lord had simply made use of him. Thus it was not his work, but Opus Dei. He was only an instrument with which God had acted. (…) The founder of Opus Dei said: I am not the one who invented anything; there is Another who acts, and I am only ready to serve as an instrument. So the name, and the entire reality that we call Opus Dei, is deeply bound up with the interior life of the founder. He, while remaining very discreet about this point, makes us understand that he was in permanent dialogue, in real contact, with Him who created us and works through us and with us. The Book of Exodus (33:11) says of Moses that God spoke with him “face to face, as a friend speaks with a friend.” I think that, even if the veil of discretion hides many details from us, still from some small references we can very well apply to Josemaria Escriva this “speaking as a friend speaks with a friend,” which opens the doors of the world so that God can become present, to work and transform everything. (The full article can be found here).

Prudence led him to inquire whether something like this might already exist in the Church. He contacted Church entities throughout Europe, from Spain to Poland, eventually realizing the originality of the message he had received. God was asking him for something specific and new. He therefore began to gather together persons — students, professionals, priests — to whom he could transmit this ideal. One of them remembers him as an inspired priest who had decided to devote his whole life to the fulfillment of that plan.

“But do you think this is possible?” he asked. To which Father Josemaria answered: “Look, this isn’t something I’ve thought up; it’s from God.”

He requested prayers from everyone he knew, because he realized the huge gap between what God wanted and what he personally was capable of. The only solution was to become very holy. And this he desired with all his soul. On one occasion, one of the Apostolic Ladies was dying. The chaplain went to visit her and later wrote in his personal diary: “Without my having thought of this ahead of time, it occurred to me to ask her ‘Mercedes, ask our Lord, from heaven, that if I am not going to be a priest who is not just good, but holy, that he take me young, as soon as possible.’ Later I made the same request to two lay persons, a young lady and a boy, and every day, at Communion, they make this prayer for me to the good Jesus.”

At the beginning he thought he should spread this ideal only among men. It was the normal thing that Catholic institutions be either male or female. But God always has the last word. On February 14, 1930, while celebrating Mass, he saw further what God wanted from him. God wished the Work to develop its apostolate among women as well. The consequences of the activities of the women would be immeasurable, because, as the founder put it, “Women are called to bring to the family, society and the Church characteristics which are their own and which they alone can give: their gentle warmth and untiring generosity, their love for detail, their quick-wittedness and intuition, their simple and deep piety, their constancy.” Their role is to bring God into the world precisely through their femininity.

Video of St. Josemaria speaking about the founding of Opus Dei (link here)

(3) CARDINAL JOSEPH RATZINGER, homily at the Mass of thanksgiving for the beatification of the Founder of Opus Dei, May 19, 1992.

(4)  VITORRIO MESSORI, “The work that Escrivá did not want to found. The story of a priest who became a saint”, Corriere della Sera, October 6, 2007.

Letter from the Prelate, October 2008