May 13th is the feast of Our Lady of Fatima. The message of Fatima contains a wake-up call for all Christians: to make reparation to our Lord for all the sins of mankind, including our own, to do penance, to pray the Rosary, to spread devotion to the Immaculate Heart of Mary, and to pray a lot for the Pope. 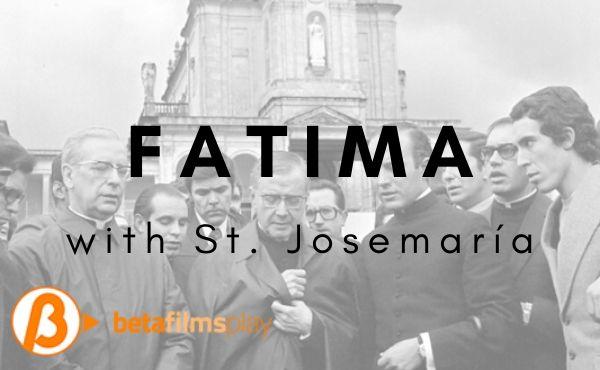 In this clip on Betafilmsplay 📹 (with English subtitles) Saint Josemaría recalls his visits to Fatima, his conversations with Sor Lucia, and his love for the rosary.

Live webcam at the Fatima Shrine:

The Story of Our Lady of Fatima

Lúcia, the eldest of the Fatima visionaries, was only ten years old when our Lady first appeared to the little shepherds on 13 May 1917; her cousins, Jacinta and Francisco, were seven and eight years old respectively. This apparition had been preceded by another: that of an angel, who had appeared to them three times in 1916, in a place called Loca do Cabeço, calling himself first the Angel of Peace and later the Angel of Portugal.


1917 was a special year: Europe was at war. On Sunday May 13th, in a hidden place in the Serra do Aire, in the centre of Portugal, three children went out with their flocks after attending Holy Mass. They went to the pastures of Cova da Iria. They pushed the herd towards the upper part of the property, on the top of the hill. There, without losing sight of the sheep, they began to play mason, one of their favourite pastimes. It was midday. Suddenly, they saw before them a beautiful Lady on a hawk, in the centre of a great aura of light that enveloped them.

"Where are you from, Madam?"

Thus began the first conversation between Our Lady and Lúcia.

Between May and October, there were six apparitions of Our Lady. She asked them to pray the rosary every day and to do penance. This last request impressed the children so much that they looked for ways to do penance and took advantage of all the small sacrifices that were presented to them.

Our Lady of the Rosary

In the third apparition, on 13 July, Our Lady asked for the consecration of Russia to her Immaculate Heart—those peasant children were unaware of the meaning of the word Russia—and for Communion of Reparation on the first Saturdays. It was during this apparition that Our Lady said: "When you pray the Rosary, at the end of each decade, say: O my Jesus, forgive us, deliver us from the fire of hell; bring all souls to Heaven and help especially those in need."

At the last apparition, on October 13, the Lady said to them: "I am Our Lady of the Rosary. I want a chapel to be built in my honour in this place." For the sixth time she recommended that they continue to pray the Rosary every day.

The first chapel to be built was destroyed shortly afterwards by anarchists, who also burned the oak tree on which Our Lady rested. The Capelinha that currently houses the image of Our Lady occupies the site of the holm oak.

As Our Lady had announced to them, the miracle of the sun took place during the apparition of October 13th, witnessed by about seventy thousand people who had come to the Cova da Iria, and published in detail in the press. In the same month, the Bolshevik revolution broke out in Russia.

The message of Fatima contains a wake-up call for all Christians: to make reparation to the Lord for all the sins of mankind, including our own, to do penance, to pray the Rosary, to spread devotion to the Immaculate Heart of Mary, and to pray a lot for the Pope. 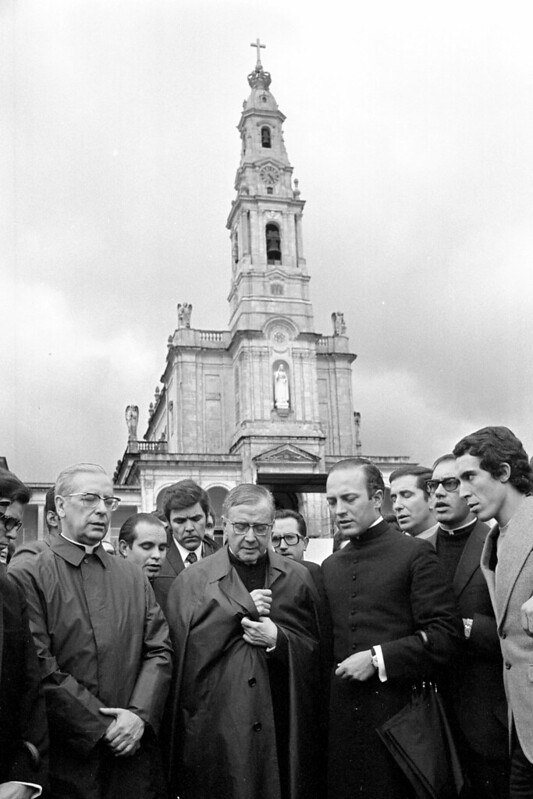 In 1945, the year that marked the end of the Second World War, in Tuy, St. Josemaría Escrivá met Sister Lúcia for the first time:


"I've thought about that many times too," was the visionary's humble reply.

Over the years, St Josemaria went there a total of thirteen times.

The prayer that our Lady taught for the Rosary, at the end of each decade: O my Jesus, forgive us our sins, save us from the fires of Hell and lead all souls to Heaven, especially those who are in most need of Thy mercy.

From Monday to Friday the Rosary is prayed in the Chapel of the Apparitions at 6.30 pm. (Portuguese time).