Audio and pdf in English of the homily: "Living by Faith", given by St Josemaria on October 12, 1947. Published in Friends of God.

Audio and pdf English of the homily: "Living by Faith", given by St Josemaria on October 12, 1947. Published in Friends of God. 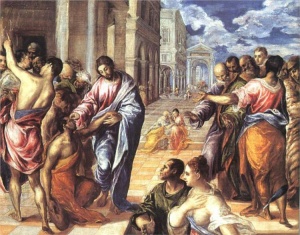 "I would like Jesus himself to talk to us about faith, to give us lessons in faith. So let us open the New Testament and relive with him some of the events of his life. For he did not disdain to teach his disciples, showing them, little by little, how to give themselves wholeheartedly to carrying out the Will of his Father. He taught them both by words and by deeds.

Consider chapter nine of St John. 'And Jesus saw, as he passed on his way, a man who had been blind from birth. Whereupon his disciples asked him, Master, was this man guilty of sin, or was it his parents, that he should have been born blind?' These men, even though they were so close to Christ, could still think badly about that poor blind man. So do not be surprised if, as you go through life seeking to serve the Church, you also come across disciples of Our Lord behaving in a similar manner towards you or towards others. Don't let it worry you and, like the blind man, take no notice; just place yourselves wholeheartedly in Christ's hands. He does not accuse, he pardons. He does not condemn, he forgives. He is not cold and indifferent towards illness, but instead cures it with divine diligence.

Our Lord 'spat on the ground, and made clay with the spittle. Then he spread the clay on the man's eyes, and said to him, Go and wash in the pool of Siloe (a name that means, Sent). So he went and washed there, and came back with his sight restored.'

What an example of firm faith the blind man gives us! A living, operative faith. Do you behave like this when God commands, when so often you can't see, when your soul is worried and the light is gone? What power could the water possibly contain that when the blind man's eyes were moistened with it they were cured? Surely some mysterious eye salve, or a precious medicine made up in the laboratory of some wise alchemist, would have done better? But the man believed; he acted upon the command of God, and he returned with eyes full of light.

St Augustine commenting on this passage wrote: 'It seems appropriate that the Evangelist should have explained the meaning of the name of the pool saying that it meant, Sent. Now you know who has been sent. If Our Lord had not been sent to us, none of us would have been freed from sin.' We must have complete faith in the one who saves us, in this divine Doctor who was sent with the express purpose of curing us, and the more serious or hopeless our illness is the stronger our faith has to be."