The stories of Dora del Hoyo and Blessed Alvaro del Portillo - both in process of canonization - are very much connected. Both responded with fidelity to God's call to spread throughout the world the message that all of us can be saints in ordinary life, through ordinary work. 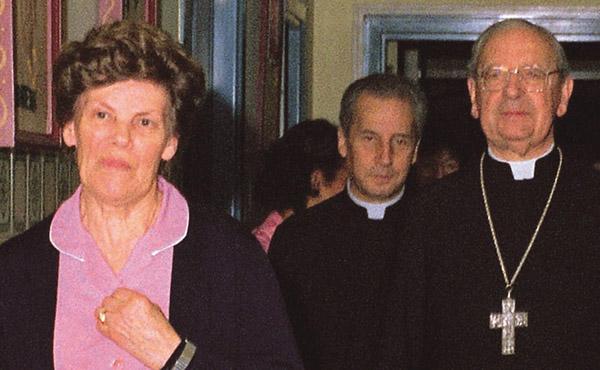 The feast of Blessed Alvaro, beatified this past September, will be celebrated for the first time this year on May 12th. The stories of Blessed Alvaro and Dora del Hoyo - who is also in process of canonization - are very much connected. In fact, their tombs can be found next to each other in the crypt of Our Lady of Peace, Opus Dei's Prelatic Church, the same church that holds the mortal remains of St. Josemaria. Both responded with fidelity to God's call to spread throughout the world the message that all of us can be saints in ordinary life, through ordinary work. As it also happens, they were also both born in 1914, meaning they would have both celebrated their 100th birthday last year.

Both were a firm support for Saint Josemaría, through their work well-done, their closeness, their prayer and work, their loyalty and perseverance especially during difficult moments in Opus Dei's history. Don Alvaro had already been living for a few months with St. Josemaria in the first Opus Dei center in Rome when, on 26 December 1946, he went with the founder of Opus Dei to pick up Dora at the Ciampino airport. Dora was coming with a few others from Spain to attend to the domestic organization of the house. The apartment where they were living was very close to St. Peter's Square. When they caught sight of the dome of St. Peters, St. Josemaria invited them all to pray the Creed, so that in a certain sense the confession of faith would be their first "act" in Rome.


Don Alvaro valued the dedication which domestic work required. For this reason, he seconded St.Josemaria's concern for professionalizing and improving the conditions of those who handle these tasks. Towards the end of 1955, Don Alvaro went on various occasions to visit a sick friend of his who was staying at a clinic called Salvator Mundi. During one visit, a few people who worked there showed Don Alvaro several installations in the building, and among them he noticed an ironing machine that seemed like it would be useful for Villa Tevere, the center where they lived. As soon as he returned home, Don Alvaro mentioned it to St. Josemaria, who indicated that, among other things, Dora should go to see the machine to give her opinion. A little while later, they were able to buy a similar machine for the house. At another point, as Don Alvaro knew that Dora would take care of dry-cleaning clothes and that she would be doing this work by hand - using a toxic liquid called bencina in an open-air patio, in both the winter and the summer - he and St. Josemaria made sure to find a dry-cleaner, the perfect machine to remedy the situation.

Dora and Don Alvaro are each an example of how everyone is called to be a saint, regardless of one's personality, temperament, talents, profession, or situation in life.

Don Alvaro responded to God's call by working with responsibility and creating an environment of peace and serenity around him, first as a student, later as an engineer and finally as a priest helping St. Josemaría to spread the spirit of Opus Dei, and in the Holy See with the work he did there.

Dora responded by devoting herself professionally to taking care of domestic tasks, through which she was able to transmit the warmth of a family to all who would participate in the activities of Christian formation provided by Opus Dei, and from there, to the whole world. She was known for working with cheerfulness and with self-denial.