Dora del Hoyo, whose canonization cause recently advanced, grew up on a farm amid a warm family atmosphere. 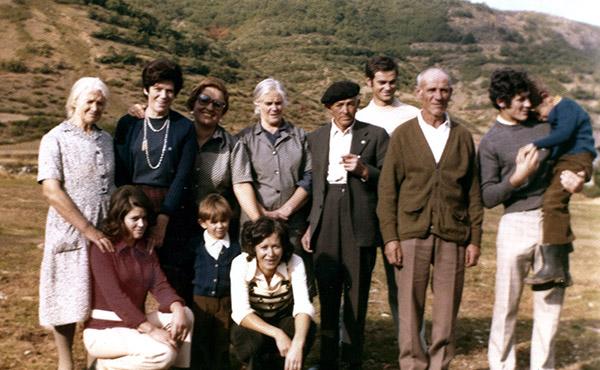 Dora with her family in Boca de Huérgano, in 1975.

Dora was born on January 11th, 1914, and was baptized five days later. She was the youngest of six children born to Demetrio del Hoyo and Carmen Alonso. At that time, the population of Boca de Huérgano was just over 200 people, with its land yielding grain, legumes and other vegetables, as well as fodder for livestock.

Dora's father was a farmer. She described him as a serious person, a man of few words and good character: deeply Christian, upright, and possessing a lot of common sense. Dora's mother had a lively personality and good sense of humor. Financially, the family's situation was very modest.

Their home was marked by deep affection. Dora would sometimes recall the good times they would have together during the long winter nights. Her father would make wool socks with four needles, while her mother and sisters wove. Sometimes they managed to convince their mother to give them ham, wine, or chestnuts.

Dora's mother taught her to pray and to think of others. While still very young, her mother told her to pray a lot for those who were suffering, for those at war, and for orphaned children.

Her mother instilled in them a love for caring for the home, in addition to a lot of knowledge specific to living in a rural environment. For example, Dora knew how to prepare a cow from beginning to end, and to manage the most exquisite cuts as well as make chorizo and blood sausage. She would also help out on the farm, which is where she learned how to raise pumpkins, important for making a dessert called "angel hair" (pumpkin strings). Later on, during the years she lived in Rome, she was known for teaching others how to make these sweet pumpkin strings.

Although winters were very cold where they lived, Dora's parents never let her skip school, which she began attending when she was around 6 years old. That's where she learned to read, write and do accounts. At that time in Spain, attending school was not a legal obligation, and so Dora did not attend a secondary school afterwards. But her family was involved in their village like everyone else. Every year to celebrate the "Day of the Tree" they would plant pine trees. Each child would sow their own seed, and water it until it sprouted. Dora also had a number of hobbies she was interested in, including breeding rabbits.

Dora said that her mother taught her to pray and to think of others. While still very young, her mother told her to pray a lot for those who were suffering, for those at war, and for orphaned children. She encouraged her children to go to confession regularly, and they would all attend Mass together on Sundays. Within this family context, the Del Hoyo children received the Catholic faith as something to be lived joyfully live each day, with integrity and honest work.