The God we come to know through faith and reason is "spiritual, transcendent, omnipotent, eternal, personal, and perfect. He is truth and love." 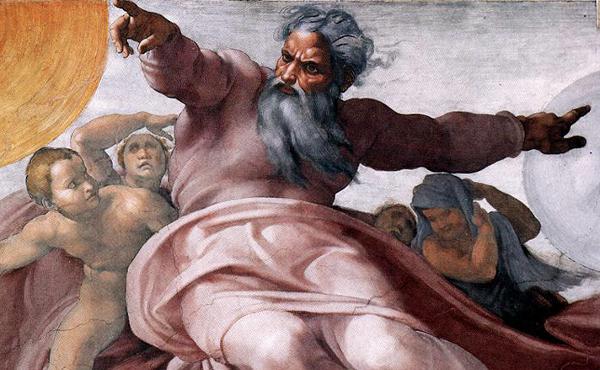 Throughout human history, all cultures have given importance to God. Indeed, the first signs of civilization are generally found within the religious sphere. The vital and creative power behind every culture is a spiritual one.

What differs from civilization to civilization is the nature of the god(s) that are believed in. In some pagan religions, the forces of nature were adored as concrete manifestations of the sacred, giving rise to a plurality of gods ordered in a hierarchical manner (polytheism). These gods were not transcendent to this world. In ancient Greece, for example, the supreme divinity in the pantheon, Zeus, was thought to be subject to the same absolute necessity (Fate) that governed the rest of the world, including the lower gods. [1] Interestingly, several scholars of the history of religion have concluded that many polytheistic civilizations show evidence of a progressive loss from an “original revelation” of a single God. But even in the most degraded ancient religions we can find glimmers and signs of true religious devotion: adoration, sacrifice, priesthood, offering, prayer, thanksgiving, etc.

In Greece especially, reason attempted to purify religion, demonstrating that the supreme divinity had to be identified with the Good, the Beautiful, and with Being itself. Hence God is the source of all that is good, all that is beautiful, and all that exists. But this reasoning brought with it other problems. It led to the idea of a God who was so perfect that he ended up far removed from the life of mortals. The supreme divinity remained isolated in a perfect independence, and even the possibility of establishing relations with human beings was seen as a sign of weakness, since it would imply some lack or deficiency on God’s part. Also there did not seem to be any way of accounting for the presence of evil, except to say that it somehow flowed necessarily from the divine through the mediation of a series of created beings.

With the Judeo-Christian revelation this framework changes radically. God is presented in Scripture as the Creator of all that exists and of all the forces of nature. God’s existence precedes absolutely the existence of the world, which is radically dependent on him. Hence God is totally transcendent. The distance between God and the world is infinite. God exists through himself, and had no necessity to create. Rather, the created world exists through a free act of God, and all that is created did not have to be. From the point of view of created things, however, they necessarily depend on God for their being and existence. Since God does not need to create and the world does not flow from him with necessity means that all that exists is desired by God and results from a free decision of his will. Everything created is good and is the fruit of God’s love (cf. Gen 1).

God’s power is infinite. Only infinite power is capable of creating, i.e., bringing being out of nothing. God’s power is so great that he wants to maintain his relationship with his creatures, including saving them if, because of their freedom, they distance themselves from their Creator. Therefore, in the context of Christian revelation, one sees that the origin of evil is not to be found in matter (as in some of the ancient philosophers and religions) but rather in the mistaken use of freedom on the part of angels and mankind, the fall of the first man and woman being narrated in the Book of Genesis (ch. 3).

God is a personal being who acts with freedom and love, and who reveals his name to Moses, “I AM WHO AM.” ( Ex 3: 14), as proof of his fidelity to his covenant and as a sign that he will accompany his people in the desert, a symbol of life’s temptations. This name, which is mysterious for us, [2] reveals something about himself. “In revealing his name, God makes known the riches contained in the ineffable mystery of his being. He alone is from everlasting to everlasting. He is the One who transcends the world and history. It is he who made heaven and earth. He is the faithful God, always close to his people, in order to save them. He is the highest holiness, ‘rich in mercy’ ( Ephesians 2:4), always ready to forgive. He is the One who is spiritual, transcendent, omnipotent, eternal, personal, and perfect. He is truth and love” ( Compendium , 40).

In this context, revelation is seen as an absolute novelty, a gift we receive from on high and which we should accept with grateful acknowledgement and religious devotion. Faced with the revealed word of God, only adoration and gratitude is fitting. Man falls on his knees before the wonder of a God who, while totally transcendent, becomes interior intimo meo (“Thou art more inward to me than my most inward being” [3] ), and who seeks us out in every circumstance: “The Creator of heaven and earth, the one God who is the source of all being, the sole Creator Logos , this creative Reason loves man personally, or better, loves him passionately and wants to be loved in turn. This creative Reason, who at the same time loves, therefore gives life to a history of love…, a love [that] shows itself rich in inexhaustible fidelity and mercy. It is a love that forgives beyond all limits.” [4]

All created beings reflect some aspect of God’s infinite perfection. God in himself is the fullness of Being without any limitation: infinite Truth, Goodness and Beauty. He is the Truth, the measure and source of all that is true (cf. Compendium , 14). He is infinite Life and Love, the source of all life and love in creatures.

Since all creatures participate in God’s infinite perfection and reflect it in some way (especially human beings, who are created in his image and likeness), their truth, goodness and beauty point back to him and tell us something about him. But no finite intelligence can embrace the Infinite One. That is why our knowledge of him acquired from creatures is always analogical. We can truly say that God is Good, and that God is Beautiful—a Goodness and Beauty we see reflected in creatures. But he is not good in the way creatures are good: he is the fullness of Goodness without limitation, in a way our limited human intellect can never fully grasp. Therefore Christian tradition stresses the need for a deep humility when attempting to speak about God based on the knowledge about him that we can acquire from creatures.

[1] The fact that this Fate was often “blind” and seemingly devoid of rational meaning led to the tragic view of existence that characterizes much of the thought and literature of the Greeks.

[2] “God revealed himself to Moses as the living God: ‘the God of Abraham, the God of Isaac, the God of Jacob’ ( Exodus 3: 6). God also revealed to Moses his mysterious name: ‘I AM WHO I AM (YHWH).’Already in Old Testament times this ineffable name of God was replaced by the divine title Lord . Thus in the New Testament, Jesus who was called Lord is seen as true God” ( Compendium , 38). The name of God revealed here has received three possible interpretations: 1) God reveals that he transcends all human knowledge, thus protecting us from the temptation to misuse our friendship with him, as happened with the pagan deities through the practice of magic; 2) the Hebrew expression used here implies that God will always be with Moses, because he is faithful and is always on the side of all who trust in him; 3) in the Greek translation of the Bible, this name was seen as God’s manifestation of himself as the fullness of being and perfection (cf. Compendium , 39), in accord with the insights of philosophy.