Decree of the Apostolic Penitentiary that sets forth many ways to obtain special indulgences during this year dedicated especially to the Holy Patriarch. 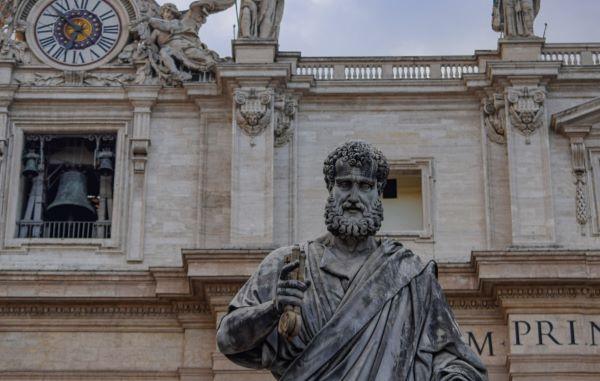 DECREE OF THE APOSTOLIC PENITENTIARY

The gift of special Indulgences is granted on the occasion of the Year of Saint Joseph, announced by Pope Francis to celebrate the 150th anniversary of the proclamation of Saint Joseph as Patron of the universal Church.

Today marks 150 years since the Decree Quemadmodum Deus, with which Bl. Pius IX, moved by the grave and sorrowful circumstances in which the Church was threatened by mankind’s hostility, declared Saint Joseph the Patron of the Catholic Church.

In order to perpetuate the entrustment of the whole Church to the powerful patronage of the Guardian of Jesus, Pope Francis has established that, from today’s date, the anniversary of the Decree of the proclamation as well as a day sacred to the Blessed Immaculate Virgin and Bride of Joseph most chaste, until 8 December 2021, a special Year of Saint Joseph will be celebrated, in which all faithful, after his example, may daily reinforce their own life of faith in complete fulfilment of God’s will.

All the faithful will thus have the opportunity to commit themselves, with prayer and good works, to obtain, with the help of St Joseph, head of the heavenly Family of Nazareth, comfort and relief from the serious human and social tribulations that besiege the contemporary world today.

Devotion to the Guardian of the Redeemer has developed abundantly in the course of the history of the Church, which not only attributes to him among the loftiest worship, after that of his Bride, the Mother of God, but has also conferred many patronages upon him. The Magisterium of the Church continues to reveal great things, old and new, in this treasure that is Saint Joseph, like the householder of the Gospel of Matthew “who brings out of his treasure what is new and what is old” (Mt 13:52).

The gift of the Indulgences that the Apostolic Penitentiary kindly bestows during the Year of Saint Joseph, through this Decree issued according to Pope Francis’ wish, will contribute greatly to the perfect accomplishment of the designated purpose.

The Plenary Indulgence is granted under the customary conditions (sacramental confession, Eucharistic communion and prayers according to the Holy Father’s intentions) to the faithful who, with a soul detached from any sin, shall participate in the Year of Saint Joseph, in the occasions and with the modalities indicated by this Apostolic Penitentiary.

— a. Saint Joseph, an authentic man of faith, invites us to rediscover our filial relationship with the Father, to renew our devotion to prayer, to dispose ourselves to listen and correspond with profound discernment to God’s will. The Plenary Indulgence is granted to those who shall contemplate the Lord’s Prayer for at least 30 minutes, or participate in a Spiritual Retreat of at least one day which involves a meditation on Saint Joseph;

— b. The Gospel attributes to Saint Joseph the appellation “just man” (cf. Mt 1:19): he, guardian of the intimate secret that lies right at the bottom of the heart and soul”[1], depository of the mystery of God and therefore an ideal patron of the internal forum, spur us to rediscover the value of silence, prudence and integrity in carrying out our duties. The virtue of justice practiced by Saint Joseph in an exemplary manner is full adherence to divine law, which is the law of mercy, “for it is the very mercy of God that brings true justice to fulfilment”[2]. Therefore those who, after the example of Saint Joseph, shall fulfil a work of corporal or spiritual work of mercy, will likewise be able to attain the gift of the Plenary Indulgence;

— c. The primary aspect of Saint Joseph’s vocation was that of being guardian of the Holy Family of Nazareth, spouse of the Blessed Virgin Mary and legal father of Jesus. In order that all Christian families may be inspired to recreate the same atmosphere of intimate communion, love and prayer that was lived by the Holy Family, the Plenary Indulgence is granted for the recitation of the Holy Rosary in families and among betrothed;

— d. The Servant of God Pius XII, on 1 May 1955 instituted the Feast of Saint Joseph the Worker, “with the intent that the dignity of work be recognized by all, and that it inspires social life and laws, based on the fair distribution of rights and duties”[3]. Therefore the Plenary Indulgence may be obtained by those who shall daily entrust their life to the protection of Saint Joseph, and all faithful who shall invoke through prayer the intercession of the Worker of Nazareth, so that those in search of work may find employment and the work of all people may be more dignified;

— e. The flight of the Holy Family to Egypt “shows us that God is there where man is in danger, where man suffers, where he runs away, where he experiences rejection and abandonment”[4]. The Plenary Indulgence is granted to the faithful who shall recite the Litanies to Saint Joseph (for the Latin tradition), or the Akathistos to Saint Joseph, in their entirety or at least some part of it (for the Byzantine tradition), or some other prayer to Saint Joseph, proper to other liturgical traditions, in favour of the Church persecuted ad intra and ad extra and for the relief of all Christians who suffer any form of persecution.

Saint Teresa of Ávila recognized in Saint Joseph the protector for all the circumstances of life: “To other saints, the Lord seems to have given grace to help us in some of our necessities. But my experience is that Saint Joseph helps us in them all”[5]. More recently, Saint John Paul II emphasized that the figure of Saint Joseph has acquired “a renewed relevance for the Church of our time, in relation to the new Christian millennium”[6].

To reaffirm the universality of Saint Joseph’s patronage over the Church, in addition to the aforementioned occasions the Apostolic Penitentiary grants the Plenary Indulgence to the faithful who shall recite any prayer legitimately approved or act of piety in honour of Saint Joseph, for example, “To you, O Blessed Joseph”, especially on the occasions of 19 March and 1 May, on the Feast of the Holy Family of Jesus, Mary and Joseph, on the Sunday of Saint Joseph (according to the Byzantine tradition), on the 19th of every month and every Wednesday, the day dedicated to the Saint’s memory, according to the Latin tradition.

In the current context of the health emergency, the gift of the Plenary Indulgence extends particularly to the elderly, the sick, the suffering and all those who for legitimate reasons are unable to leave the house, and who with a soul detached from any sin and with the intention to fulfil, as soon as possible, the three customary conditions in their own home or wherever the impediment detains them, shall recite an act of piety in honour of Saint Joseph, Comfort of the Sick and Patron of a Happy Death, faithfully offering to God their suffering and the hardships of their life.

In order to pastorally facilitate the attainment of divine grace through the power of the Keys, this Penitentiary prays earnestly that all priests endowed with the appropriate faculties may offer themselves with a willing and generous soul to the celebration of the Sacrament of Penance and often administer Holy Communion to the infirm.

This Decree is valid for the Year of Saint Joseph, notwithstanding any disposition to the contrary.

Given in Rome, from the See of the Apostolic Penitentiary, on 8 December 2020

[1] Pius XI, Address on the occasion of the proclamation of the heroic virtues of the Servant of God Emilia de Vialar, in ‘L'Osservatore Romano’, year LXXV, n. 20-21 March 1935, 1.

[3] Pius XII, Address on the occasion of the Solemnity of Saint Joseph the Worker, 1 May 1955, in Discorsi e Radiomessaggi di Sua Santità Pio XII, XVII, 71-76.

[6] John Paul II, Apostolic Exhortation Redemptoris Custos on the figure and mission of Saint Joseph in the life of Christ and of the Church (15 August 1989), 32.