Ordination of deacons, "a great manifestation of faith"

A few days before the Year of Faith concludes, Bishop Javier Echevarría conferred diaconal ordination on 30 faithful of Opus Dei. With words of the Prelate and photos from the ceremony.

Photos from the ordination ceremony 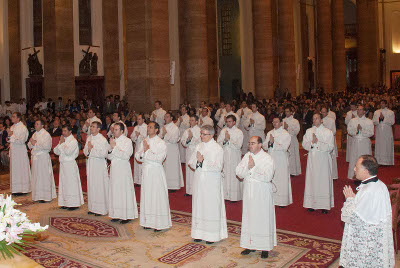 The Prelate offered remarks on some of the key moments in the diaconal ordination: the imposition of hands and the prayer of consecration, the vesting with garments proper to the deacon (with the stole and dalmatica), the giving of the Gospel and the kiss of peace.

“We are taking part," he said, “in a great manifestation of faith. Each of these men, after having responded freely to God's call, is about to become Christ's minister, a servant of all men and women. The choice is a divine one.

“Jesus takes possession of each one of you, of your whole being, to make you living instruments of his sanctifying action. I understand your joy and emotion on becoming Christ's minister, since the gift you are going to receive is immense.

“You will be faithful to him, with God's help, if you watch over and nourish your spirit of prayer, fulfilling faithfully your duty to recite the Liturgy of the Hours, and striving to conform your life to Christ's, whose Body, from this moment on, you can distribute to the faithful in Communion."

And addressing the faithful who filled the Basilica (relatives and friends of the deacons and parishioners), he said: “Let us accompany the new ministers of our Lord with prayer and mortification. And let us beseech the Holy Spirit to send many priestly vocations to the Church."

The new deacons will be ordained priests on the upcoming 10th of May in the same Basilica.

Photos from the ordination ceremony.