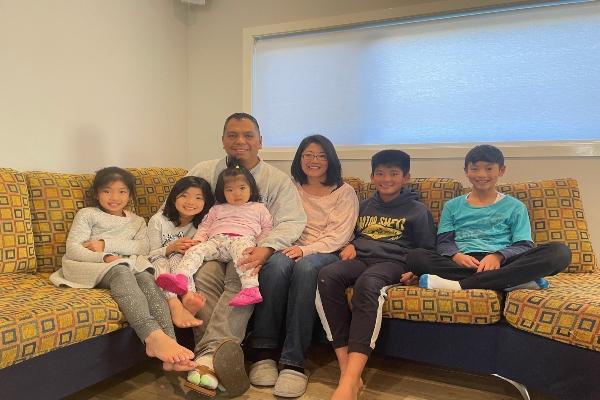 Born and bred in Japan, Shoko Hazama-de Guzman visited Australia in 1996 to study at a hospitality college in Randwick. She soon fell in love with the country, decided to stay, and in 2003 she was married. Shoko and her husband were excited to start a family - but it would be six years before this would happen, and only through the intercession of St Josemaria.

But this story of faith starts years before that, as Shoko was not born Catholic. When she was a child, her mother started attending a Protestant church, but couldn’t quell her curiosity about Our Lady. Since her ministers had nothing to offer her on that subject, she decided to start attending a Catholic church, which led to her conversion. After this, she took Shoko along with her to Mass, and so she too was baptised at age 10.

Shoko’s brother converted during his university years, travelled to Rome for the annual UNIV conference, and was baptised by Pope Saint John Paul II himself! Later he became a priest in Japan. Next to convert was her sister, after the birth of her first child (she now has 12 children), and last of all her father – around 10 years ago.

Shoko began to attend a centre of Opus Dei (luckily one of the few centres in Japan was in her home city) to learn more about her faith, and this was how she discovered her vocation as a supernumerary towards the end of high school. So it was natural for her to turn to St Josemaria when things were tough.

“I always had a devotion to St Josemaria… Being a member of Opus Dei, we get to know him through watching the videos and reading his books… and reading other people's writings about him. So we know that he is a great saint. So whenever I had anything that I'm concerned about, I would use his prayer card.” Her brother even managed to get her a prayer card of St Josemaria in Japanese, complete with a relic.

When Shoko married her husband Ronald, they soon learned that she had endometriosis. Doctors also discovered other fertility issues, including the fact that her fallopian tubes were blocked and also had a congenital deformity.

“So, deformed, blocked, and endometriosis!... They said, it does look like you're not going to be able to fall pregnant, you know, ever, at least by the natural way… So that was really devastating and I was really in denial, praying the prayer card… And I was asking every single person that I met to pray for me and pray for this intention…”

“But it was a really tough time… I really felt a bit of a sense of not being able to fulfil what I was called to… So I just keep on praying. But at the same time I was praying… ‘Only if that's in God's will, and otherwise just help me to accept it with peace’… I always ended up in tears, you know, because I was still not at peace with that reality.”

Then one day, when her cycle was a bit late, Shoko decided to take a pregnancy test. After so many negative results, she figured it couldn’t hurt.

It was positive! It was a shocking yet amazing moment for the couple, so they went to their doctor to double-check. Due to her issues, they warned her that it could be an ectopic pregnancy, but the ultrasound proved that their prayers were answered – it was a normal, healthy pregnancy.

“After I gave birth to my first, I wrote a card to the specialist who told me that I wouldn’t fall pregnant! I just really wanted to show them, you know, the power of prayer… I said, ‘Thank you very much for your assistance in trying to improve my situation… I just continued praying and trying and I was blessed with a baby in a natural way.’”

“But then, the funny thing is that… six months after or so, I found out that I was pregnant again with my number two. I wasn't doing anything and I wasn't really prepared, I guess! First of all, I didn't know that I could fall pregnant with the first one, let alone with a second. So it was a bit of a surprise, but I was happy...to have a sibling for the first.”

“But then it kept on coming!”

With all the prayers, Shoko surprised everybody (including herself) by going on to have four kids over five years. A few years after this, when she felt ready for number five, she again asked St Josemaria for help, saying she was very happy with her four kids, but to intercede for her if God wanted her to have a fifth. Sure enough, although her doctors thought she was close to an early menopause, she fell pregnant with her youngest - who is now two years old.

For Shoko, the love of St Josemaria for all his sons and daughters in the Work is very evident. “Whenever I think of St Josemaria, the first thing that comes up, in my mind, is a video that I watched of him having a get-together… An old man was standing up to ask a question or just to talk to him… and there was a bit of a distance. And at the end…the old man wanted to give a hug…and our father was also trying to give a hug, and I thought it was so beautiful. It's so warm, you know, full of love… I know that without the Work, I wouldn't be as happy as I am, so I’m very thankful for all that grace.”