What do you mean when you say that the woman is the keystone of the family? 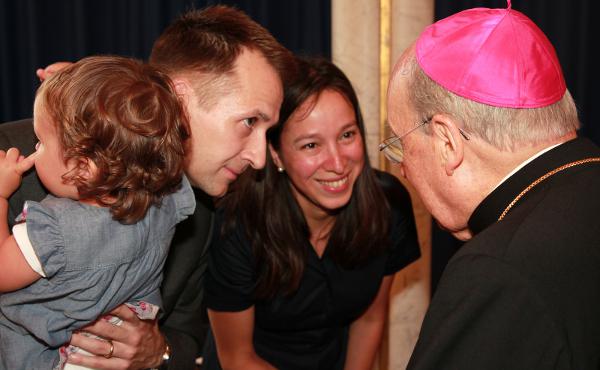 I mean it in the strict sense. The family, the basic cell of society, is a common project requiring everyone’s contribution: husband, wife, and children. It is certainly very necessary, in our time, to recognize the greatness of fatherhood and the father’s responsibility in the family. But we cannot exclude the mother, whose role is equally fundamental.

To deny the mother’s immense and irreplaceable role in the family is to close one’s eyes to reality. I’m not referring to her capacity for homemaking, but to a set of moral qualities that cannot be summarized in a few words without risking simplification and falling short. Mothers possess a wonderful ability to express love, to make others happy, loving each one as he is, in a disinterested, unconditional manner. For me, the family rests and is built upon that particular kind of wisdom and the intuition so proper to the woman.

In your view, is there an incompatibility between a woman’s work outside the home and her work in the home? Patricia Mayorga, in El Mercurio (Santiago, Chile)

There is no incompatibility, but whenever there are two jobs to do, there is undoubtedly a tension. Every woman who is in that situation is aware of how she is pulled home: to attend a sick child, to keep up with the multitude of tasks a home generates, not to speak of pregnancy and maternity. Other times it is the outside job that pulls on her, because the income is necessary for the family’s advancement; or because every enterprise demands results, not always in a reasonable or flexible way; or because of the need for professional competence and the threat of unemployment. It is out of this double responsibility that tensions arise. In order to resolve it, different ways of organizing society and labor would be needed which today are disregarded.

I should add a consideration that might seem evasive, but for me is not. These days, a lot is rightly said about not reducing women to domestic tasks, about enabling those who want to work outside the home to do so. But to complete this line of thought, I think it necessary to add the man’s obligation to be active in the home. He, too, should feel the tension between his job at home and his outside work. Only if he shares that experience with his wife, and the two of them work it out together, will the man be able to acquire that sensitivity which the family needs in our day. And that requires clarity, self-denial, and refinement on his part.

I said that this might seem evasive. But let me ask this: Which is the greater problem, the tension that the woman suffers between her work inside and outside the home, or the fact that she suffers this anxiety alone, because men are shirking their family responsibilities?

What do you think should be the role of women in society? Patricia Mayorga, in El Mercurio (Santiago, Chile)

Women are called to play as significant a role in society and in the Church as men. And I say are called, because unfortunately the presence of women is still for the most part limited to the private sphere, with minimal participation in tasks of public responsibility. There are still few women active in the world of politics, the economy, and international relations, and men continue to be the principal shapers of society. But changes in this area are occurring quickly, and to a certain extent, without historical precedent.

The role of the woman is defined, in my opinion, by two factors: her identity and her self-determination. A woman, just like a man, has to be able to choose her own future, to pursue her own life project. To do this, she must have the same opportunities as a man. And she will do this by reason of her own identity, being who she is, without falling into the temptation of mimicry, without imitating the customs and manners of men, thinking that in this way she will find herself.

Women are demanding for themselves — at times silently — not speeches, promises, or flattery, but rather deeds that confirm in practice what so often are just boastful good intentions. In other words, women are demanding to stop being a theme, a motive for international conferences, an uncomfortable sector of society to which is granted — as if by way of concession — a certain quota of power. The woman is, simply, one more person, destined to build with man the society that they are both a part of, with equal rights and opportunities.

I thank God often when I see how the women of Opus Dei work, in all sectors of society. They run businesses and hospitals; they work in the fields and in factories; they teach in universities and in high schools; they are judges, politicians, journalists, artists; or they dedicate themselves exclusively to the work of the home, with the same passion and the same professional outlook. Each one follows her own path, and all of them are conscious of their dignity, proud of being women, and winning respect day by day.